Jim Ryan, Coleraine, Cashel, Co. Tipperary experienced issues with his back in his early 30s which led him to invent the Calving Assist.

The dairy farmer has designed a device similar to a belt to help farmers calf cows.

“The aim of calving every year is trying to save as many calves as you possibly can. Every time I tried to pull a calf; it was irritating my back. I had it in my head if I made some kind of harness, I could use the strength in my legs and just eliminate the lower back.” he told That’s Farming.

“When I was around 30, I ran into back trouble. For a couple of years, I struggled with my back, but thank God, it healed up. After, I realised I had lost power in my lower back for calving cows.”

“Anyone that has done a dairy calving season would know that a cow will go down against a wall or she will calf in cubicles. You just end up pulling them.”

Jim trial and tested the Calving Assist, which can hold 1.3T, before coming up with the final product.

“The first one I made was from a horse girth, and I tied a rope on each end of the girth. It’s all about the position; I positioned it around my glutes, that was my key idea.”

“I needed to make a release mechanism because the first one I’d made you were literally strapped onto the cow, and there was no way out.”

“Also, I spent the summer trying to make a release mechanism, and it was actually my father, Dick, who came up with the one I went with.”

Conveniences of the Calving Assist

The Calving Assist is easy-to-use, and the release mechanism makes it safe. Jim’s wife, Triona, is nursing in the ICU in Clonmel and they have three young children: Paudie, Ciara, and Ellie, so convenience is paramount.

“It [the Calving Assist] is not competing against a calving jack. It is just for smaller calves that need assistance. With this invention, you can calve cows easier.”

“I remember coming up here twenty-five years ago, and my father used to be swinging out of a jack, those kind of days are kind of gone. It [The Calving Assist] is a very effective thing for calving a cow.” 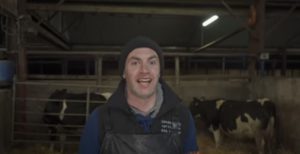 He took an opportunity to thank friends, including Martin Burke in the FRS Cahir, who have supported his business venture. Jim showed Burke, a family friend, his innovation before releasing a YouTube video.

The product’s price has yet to be confirmed, pending the outcome of discussions with potential manufacturers.

“I would rather if it is made in Ireland and made right because the idea of this is that you only buy one.”

“The release mechanism is all made of stainless steel, and the harness is made of the same material used on safety belts in a car so that it will not break. We’re hoping in the next two weeks; we’ll have them out I believe.” Jim Ryan concluded.