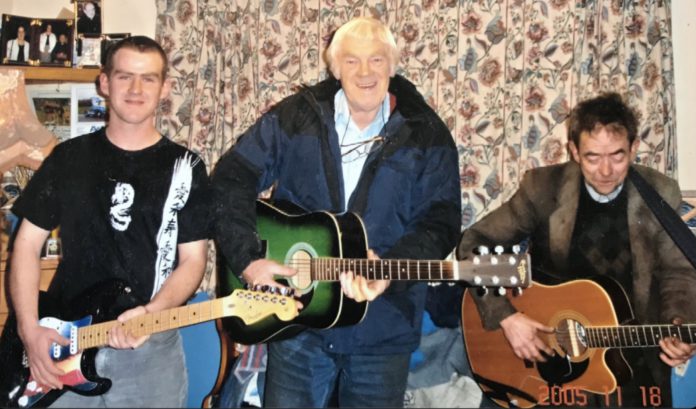 How ‘Hit the Diff’ star Marty Mone shot to fame

Monaghan man, Marty Mone shot to fame, in 2015 when his song and video for Hit the Diff went viral.

The Castleblayney native divides his time between his musical career, working on his uncle’s farm agricultural contracting and his love of passion for agriculture and machinery.

From a tender age, he always knew music would be part of his life. ”I started playing lead guitar as a neighbour beside me was playing lead guitar in a band. At 15-years-old, I was nearly driving full-time and playing with bands at the weekends”. He told That’s Farming.

“I was a big fan of Big Tom. I remember seeing a Big Tom DVD and saying I am going to do that when I am older, not thinking that this was going to happen.”

“There is a picture when I was a teenager with a neighbour of ours. The three of us all standing there holding three guitars each doing some playing that night.”

“I would take up a guitar, he would play a few chords, I would sing a couple of songs, Big Tom would be giving me advice. Big Tom was on a music break by the time I was up and going; he made a comeback in later years.”

“I would have started playing in the rock scene, so I went from rock to country. Bruce did a mix of songs.”

Marty started playing in school and music bands, playing in bars throughout the country. ”I was playing with different musicians at different times.”

Mone has his own record labels and does a lot of the work himself. “I never really worked through anybody in the music industry; it was the song Hit the Diff that really launched me into the music scene.”

Recording songs and meeting with the fans are very close to him. “You would go to shows, and a two or three-year-old fan will come over with their parents, they’re just amazed.”

“I really love that end of it, thinking will the fans like it or not. I love meeting young people because they give you a lot of respect, I try to give it back to them.

Marty recorded his first single, Hit the Diff. “I started to record the song and mix my songs and make videos. This was 6 years ago in 2015. Children have it where it is. I think it is still getting 30,000 views every week six years later.”

“It was that song that introduced me to the industry, getting that song played, and that much was brilliant. It was the first song recorded in the same studio that I am still using today.

Furthermore, he recorded Better than a Dream in 2015. “I am thrilled with this song; it is a slow dance that is used at weddings.”

Later in 2015, he released Slip the Clutch. Since then, he has been recording songs and releasing many albums too.

In November 2020, he released The Day the World Shut Down. “I said now is the time to put it out as the world is half shutdown. It seems to be getting a good response.”

“A lot of people are noticing that it is one of the songs that was written about the way things are now. I hope to go back up to the faster upbeat songs. I love changing it about.”

Marty got the opportunity to sing at half time during the GAA Football All-Ireland Senior Championship Quarter-Final between Monaghan and Tyrone.

”It was one of the biggest surprises. I did Hit the Diff in Croke Park it was pretty cool.”

“It is the young people who love all of this type of music. The younger audience is a big major part. I like meeting the young as much as I can.”

Mone said online is good, but the biggest challenge he has noticed online is the absence of meeting the people.

”It takes meeting the people face to face to make it better. If it does not open up later next year, it will be very strange.”

Marty has done a drive-in gig at the Farmer’s Bash. ”I had never played to cars before. I did think it was going to be weirder, when I asked who was enjoying the night, all the cars start blowing the horns and flashing the lights.”

”They were still able to respond to you. It was pretty cool and better than I thought it would be, there was still plenty of energy.”

During the songs, “I got them flashing their lights with their cars instead, so we could still work with it which was pretty cool.”

Marty plans to aspire his musical career, “hopefully when it all opens it up next year, I will have the shows and releases all going out together”.

“The fact that you cannot get meeting the fans is a big challenge, getting out and about, getting yourself seeing and known that is the biggest challenge.”

Marty also misses filling in musicians and practising songs. “A big challenge is the live scene end of the business not been allowed, to bring that back up is a massive challenge.”

“It is going to cost rightly to get back into the scene and to get the bands practising.”

Marty hopes to do more shows in England, Australia and New Zealand. “We are hoping to do a more focused tour around Ireland for all ages, early evening gigs. That is still definitely on the list.”