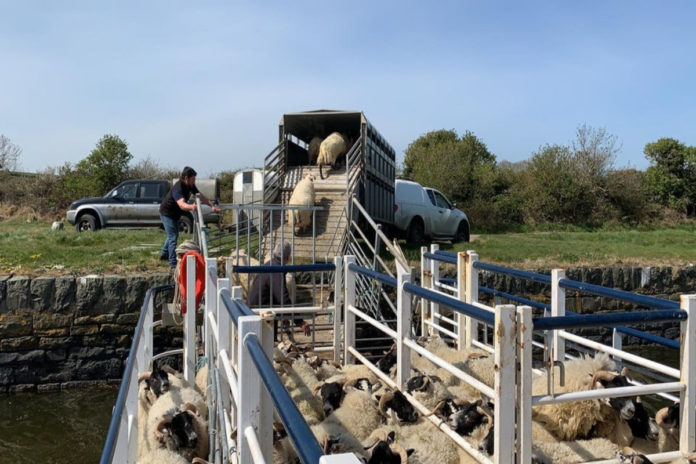 VIDEO: Transporting 150 hoggets to an island by barge

Strangford Lough in Co. Down contains 20 islands of rich grazing land, acting as a home and source of feed for cattle and sheep for the last 200 years.

The animals were traditionally transported to the islands by makeshift rafts, but some could be accessed by a short swim across the lake.

As well as the animals benefitting, the islands also profit from their activity. The grazing animals play an important role in the conservation management of the land by controlling scrub growth.

The National Trust is responsible for the maintenance of the 20 islands, 12 of which are regularly grazed. In recent times, the charity helped local farmers, Frankie and Kevin McCullough, in transporting 150 hoggets from an island.

The National Trust has been operating a livestock barge on the lake since 2000 to allow the continued farming of the islands. They claim that without it, there would have been land abandonment and the afforestation of the islands, either through planned planting or natural succession.

Head ranger for Strangford Lough, Hugh Thurgate, said: “Loss of grazing would also lead to a decline in suitable grazing habitat for wintering wildfowl and a loss of suitable habitat for breeding seabirds for which the Lough is internationally renowned.”

“Woodland development would result in the disappearance of visible culture, history and archaeology which is currently wonderfully accessible. The Cuan Brig is the only vessel that farming landowners and tenants can hire for the movement of stock and is available to anybody, it’s not just for National Trust tenants.”

The 150 hoggets transported by Cuan Brig were offloaded at Mullagh Quay, which is one of a series of early stone-built quays on the Lough that pre-date the 1834 Ordnance Survey Map. The National Trust speculate that it would have been used for importing coal and potatoes among other things in previous centuries.

Thurgate said: “It is one of the pleasures of using the barge that we can re-use quays, that have been around for close to 200 years, for the first time in many, many decades.”

- Advertisement -
Previous articleWhen should grass be cut for silage?
Next articleQUIZ: Test your sheep price knowledge