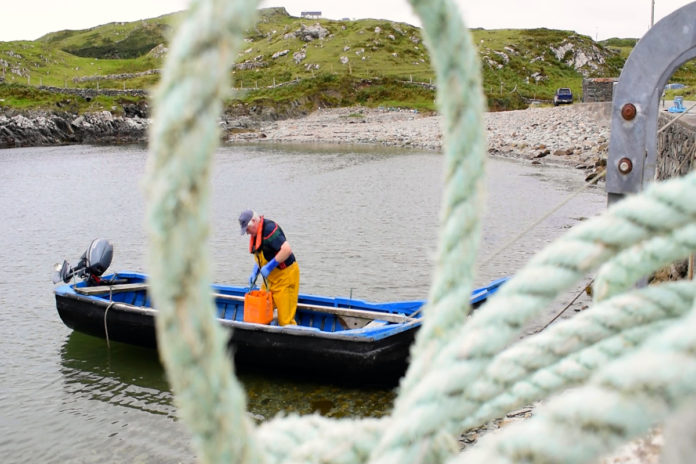 On today’s instalment of the Island Farming Adventure series, Caroline Keane is headed back to the beautiful Mayo island of Inishturk where she will be catching up with local fisherman Michael O’Toole.

Michael has been fishing on the island since as far back as 1964.

With forty lobster pots to manage, Michael likes to kick starts his day at 6 am.

Michael gets his currach ready along with the days fishing bait and heads out to sea to visit his pots in the hope of finding at least three of four lobsters.

“If I got one in three or one in four, it would be a good average day!” Michael commented.

Michael explains the introduction of the gauge back in the 1980s and the idea behind it.

“When the gauge was introduced back in the 80s, the small lobster would have been sold the same as the big lobster. If the lobster is under 8 to 7 millimetres, he goes back.”

After a successful day out fishing, Michael returns to shore around midday. His lobster is then sent back to the mainland where a percentage of his produce will be exported to Europe.

“My lobster goes to Roonagh Pier and they are shipped off to France or Spain,” Michael explains.

The wooden currach is a traditional workboat which was an essential part of island life. Michael continues to use the beautifully crafted boat for his lobster fishing today, as he explained:

Michael started fishing at a young age with his brother and has practically grown up fishing in a currach. “Yes, I’m fishing in currach’s all my life,” Michael commented.

The traditional currach is also useful when coming and going through Pontoon Pier. Pontoon is famous in its own right for being the narrowest harbour entrance in Europe.

“I think the narrowest is around 11 feet,” explains Michael.

Michael’s passion for his lobster fishing and his time spent at sea is evident from the way he shares his fishing knowledge and continues to implement Inishturk’s old fishing traditions.