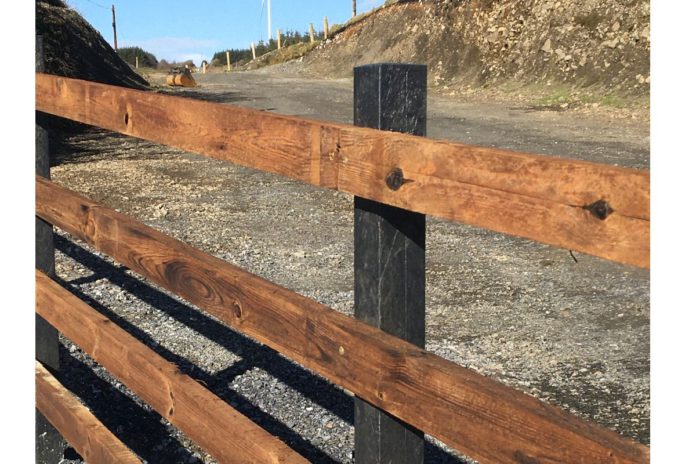 IFF Plastics Limited is a plastic washing, shredding and manufacturing company in West Clare. The enterprise accepts all plastics for washing and shredding from industrial factories, farms and recovered ocean plastic in their eco-friendly plastic fencing posts.

All processes of recycling are completely customised to reuse up to 95% of all plastics accepted at the facility. Any of the material that cannot be used is processed for another business to recycle.

A history of recycling

Pat Barrington has been working in plastic recycling for around 25 years and now works alongside his children, Sharon and Liam, in this new business. The family company originally had a washing and pelleting system, where they would take the raw materials and produce a pellet. The economics of this system, however, wasn’t viable.

“We were spending an awful lot of money trying to get it back to a raw material for someone else to make a product from it.” Sharon Barrington told Cian McAndrew of That’s Farming.

This led to the decision of trying to manufacture their own product. “We had to think about something that was widely used and could be sold to different sectors. We could sell this product to the farmers, the county councils, the windfarms and the road infrastructures so that’s how we came up with the plastic fenceposts.”

“We thought these would be ideal for Irish conditions because it’s so wet that timber fenceposts just don’t last. We thought it was a good idea, so we started with one product. We’ve invested a lot over time and now we’re up to three products.” she added.

The company was established in 2010 when they made their first five-foot plastic fencing post. Since then, two more have been added to the product list, a six-foot round post and a six-foot square post.

The majority of the plastic is sourced from a plastic collector, who collects farm plastic from Clare, Limerick and North Kerry. They get plastic directly from some industries as well. The process of making the posts starts with the washing and drying of the materials they source. The clean material is then melted down and moulded into stakes.

“What we have been really good at is segregating, collecting and transporting waste. More investment could go into Ireland where we could recycle these materials ourselves and make our own products for them.”

The growth and establishment of the company are as a result of their hard work. They had no external help and still managed to grow it to where it is today.

“We’ve done really well because we’re on our own. We make them, advertise them and sell them ourselves. We found that when we approached other companies to sell them, they were just becoming too expensive and out of the reach of a lot of people.”

Sharon has heaped praise on the farmers for supporting their business; she says their success is down to the farming community.

“For a company that started from nothing, just an idea, we have done really well. I have to commend the farmers that are using them because 90% of our sales have been farmers. They keep coming back and gradually, over time, they’ve fenced all their land in plastic posts.”

“A lot of people start with a small quantity at first and then think ‘that’s a great job’ and they’ll come back and buy more. It’s just to get people to try them the first time but after that, the pallets just fly out.”

“I really want to praise the farmers who have sent us their plastics but then also come back to buy our products. There’s no incentive for them to buy plastic stakes, they could just as easily buy a timber one that’ll last two or three years as opposed to a plastic one.”

“I really do appreciate the support from the farming sector, they’ve been really good to us,” she concluded.