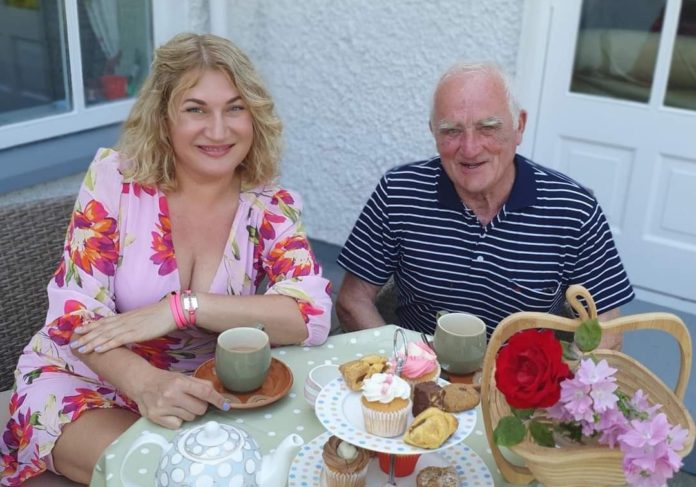 Her neighbour and friend passed away in a tractor crash a short while after he starred in the production.

As reported by us, Lynam (77) died in a single-vehicle collision in Co Westmeath on Monday morning, August 2nd, 2021.

On first hearing the news, Larissa, who is married to farmer and butcher, Christy Tormey from Kilbeggan, immediately decided to postpone her plans to release the video.

However, after speaking with Tom’s family and receiving their permission, she premiered it on her official Facebook page last week.

Tom’s sister, Mary, told Larissa, “We want the video to come out and for Tom to be remembered like that. He is so jolly and so full of fun in it.”

In sharing the video, Larissa wrote, “With the blessing of Tom’s family, I am deeply honoured to be able to share the video for my song, Old Fashioned, in which Tom – family friend and neighbour – starred only a short time ago.”

“We had the most wonderful and fun day making this. Tom’s bright and beautiful soul is clear for all to see.”

“Tom was a gentleman, always, and in every area of his life. I will always treasure my memories of Tom, and I am dedicating this video for Old Fashioned to his memory.”

“Thank you, Tom, for being one of a kind. And until we see your smile again, may you Rest in Peace. He will be sadly missed by all of us who were lucky enough to have shared this world with him.”

‘An old-fashioned gentleman in every way’

When Larissa was planning the video, the one thing that did not need a second thought was who she would like to appear alongside her. She said Tom was her “first and only choice”.

“Given that he was himself the very definition of an ‘old-fashioned’ gentleman in every way, whose always warm spirit was known to all, Tom was perfect for such a role. Or, indeed, such a role perfect for him.”

And now, tragically on the one hand, but in a comforting way on the other, this is how Larissa and so many more will remember the farmer and horseracing official.

Poignantly, Larissa also revealed that when she first asked him to star in the video with her, Tom remarked, “Well, I am shy, but at least it will be a memory.”