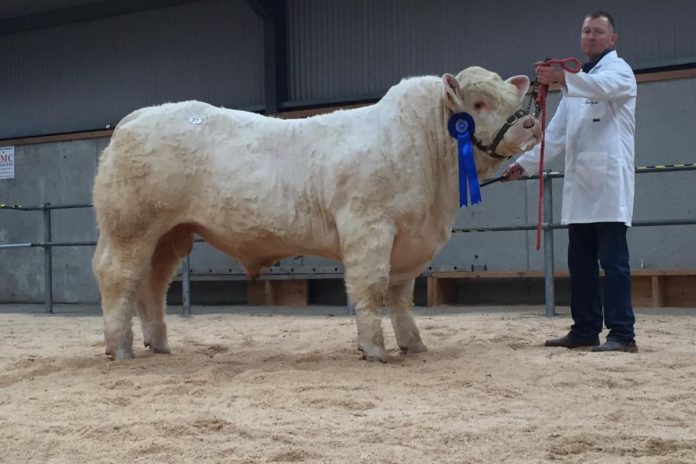 The trio run the herd alongside 10 commercial cows, their followers, and some bought-in store cattle.

The Kilvilcorris, Drum-based farm spans 200-acres, split between 150-acres of grassland and 50-acres of tillage.

These included Clarrisa and Dancer from Benny’s Prime herd with Bluebell Renda and Bluebell Uppsala aquired from Ted’s Bluebell herd.

The remaining heifers came from society sales with French, British, and Irish bloodlines.

“We would have had one very good cow, Kilvilcorris U Beauty, who bred many good heifers.”

“Her daughter, Kilvilcorris Camilla, bred a good bull, Kilvilcorris Genius. We sold him in Tullamore in April 2013, and he made €9,400.” 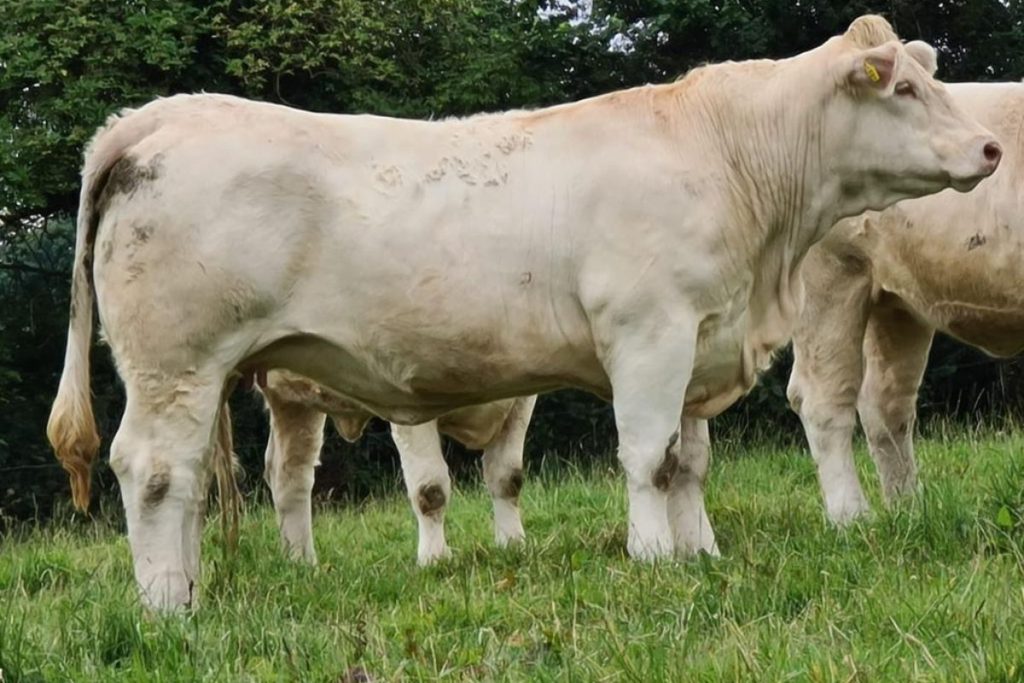 Pedigree breeder Benny Keating encouraged the family into breeding Charolais and, as alluded earlier, supplied them with foundation females.

“We would be very interested in the breed, following the breeding of them and the genetics.”

“I could follow a lot of the bloodlines back and be very familiar with all the bulls through the years in France.”

“We would see great potential in Charolais with the size and strength they bring. The carcass weight is a great seller whether at weanling stage or through to a beef animal.”

“The cornerstones of their breeding policy are structure, function, ease of calving, and correctness.”

“They are a herd of very good quality hard-working cows. In that, I mean that all our cows rear their own calves, and their fertility status is very good.”

“Our policy has always been that if you have a good herd of cows with good structure, function, and correctness, you will consistently breed top-end commercial bulls of them.”

“Temperament would be very good in the herd as well well; cattle are very easy to handle.”

The Ryan family calve most of their herd in September, October, and November.

“I would say autumn-calving gives definite advantages. If you have an autumn-calving cow, it gives you a great window to sell a bull calf off them because it is coming to a nice stage of maturity.”

“I find autumn-calving a big advantage in you are not shoving your bull too young or too hard to get them out to the sales. It gives them that bit of chance to grow naturally and mature.” 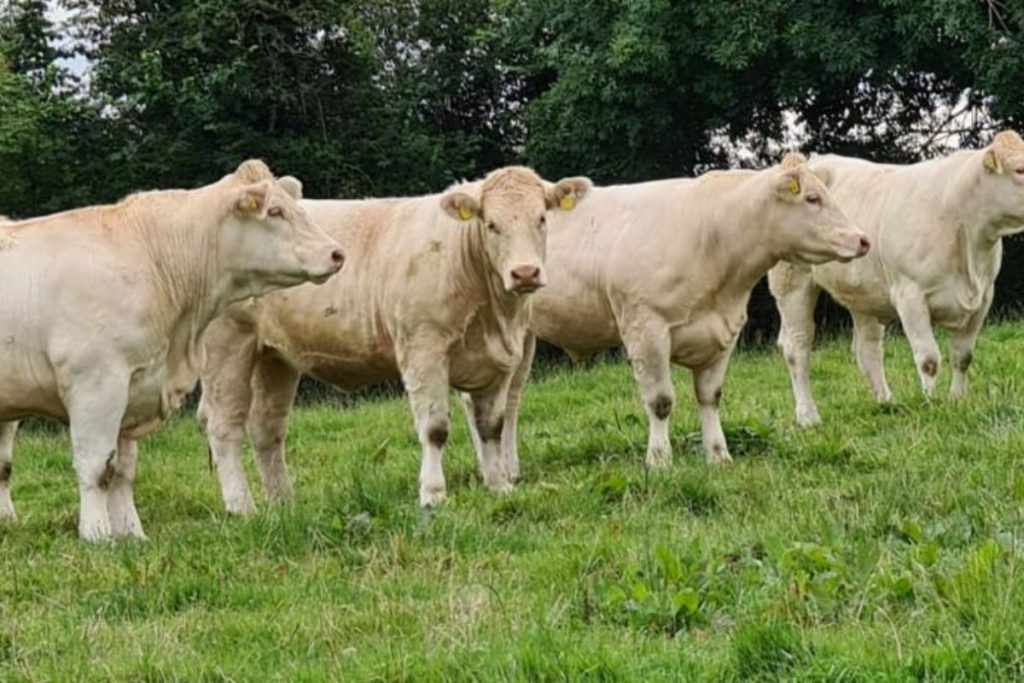 They purchased this bull for €5,700 at Irish Charolais Cattle Society sale at Tullamore. His pedigree includes Hermes, Domino, and Anneskeagh Naomi.

“The cows being indoors with autumn calving gives you a great chance to use AI and handle them.”

“French breeding has done very well for Ireland. I think the Irish producer has tweaked it a bit to look at the type of bull required here in Ireland, with a bull expressing a nice bit of muscle and not growing too tall.”

“We would not have used any of the bulls that have been trialled until they were well-proven.”

A limited amount of ET work is completed on the farm. One of these cows includes Kilvilcorris Daphne, who produced Kilvilcorris Onela.

Kilvilcorris Onela will be offered for sale in GVM Tullamore Mart on September 10th, as part of the very first heifer sale, PJ is organising for females born since 2019.

The Tipperary natives breed over 20 heifers most years, retaining up to 8 replacements, selling the remainder.

PJ shared his thoughts on what it takes to suceed in the pedigree cattle breeding field.

“To become a successful pedigree breeder, you need a good keen eye. I think it is invaluable that you go to the sales and see what is breeding well and what is selling well.”

“It gives you a great target to produce a certain level when you see what level you need to get to get into a mix of the top-end of the breed.”

“You do not want to go in blind and think that your animal is the best. You will never learn anything if you are not willing to accept an animal has a weakness.”

“I think it is from this you learn that when you do not come out on top for some reason, you see the reason, learn, correct it, and go further the next time.” 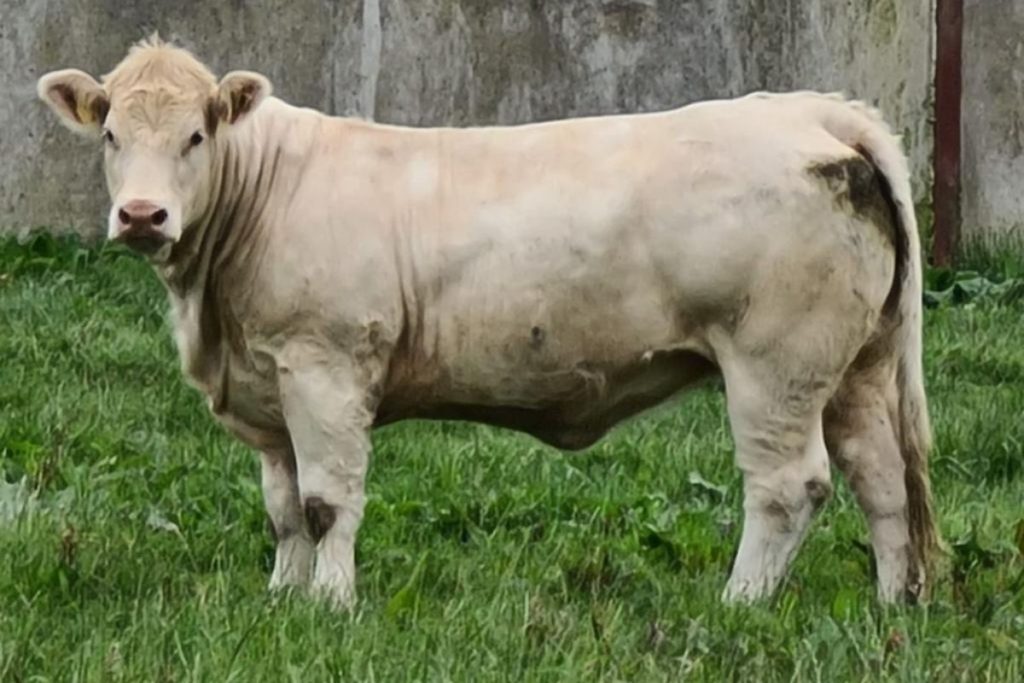 PJ intends to maintain his herd size with the best genetics, focus on the market’s demand, and maintain a high-quality herd status.

“Irish Charolais in Ireland are in a good position. They have gained an awful lot of ground over the last 24 months and seem to be very popular at weanling sales.”

“Any people feeding cattle to beef, and over the spread of the breeds, the carcass weight of the Charolais will be very hard to beat.”

“Good weanling buyers have to wait at sales for Charolais, which they seem to command a premium price a lot of the time.”

Future of suckler farming in Ireland

He also revealed his views on the future of the suckling sector in Ireland.

“If suckler farming is protected to an extent, there is a good future there,” the Tipperary Charolais breeder stated.

“It is necessary that there is because it is very evident, when we are at the sales in Elphin, staying in local accommodation or go to the local restaurant, how important agriculture is to the west of Ireland.”

“Also, it is an integral part and needs to be protected to keep society going to its full extent in those counties.”

“Also, it adds a lot through Donegal and Clare maintaining the countryside and its beauty which is very important for tourism. I think it would be very short-sighted to let suckling dwindle in any way.”

“It has to be protected, and it affects a wider reach than just the suckler farmer themselves. It is a whole way of life over there.”

“Suckler farming done at the top-level throughout Ireland has a bright future. I think it is important the commercial suckler farmer continues to push to produce the very best quality possible,” the Irish Charolais Cattle Society member concluded.

- Advertisement -
Previous article
Doga: Why is it the best fitness activity to keep you and your dog in shape?
Next article
Tight supplies ‘force’ factories into increasing beef prices