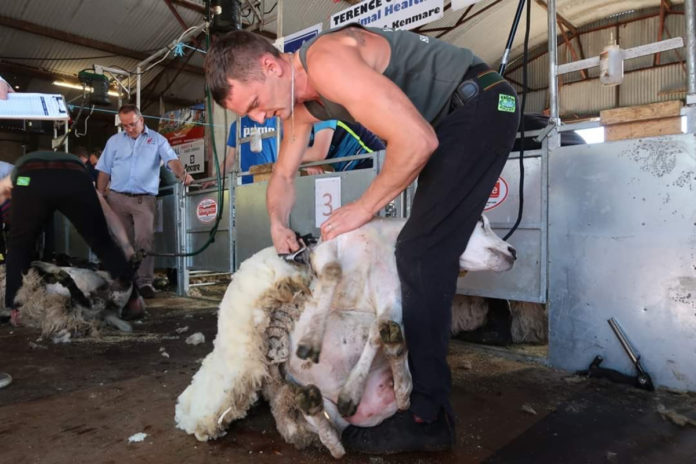 Although farming in West Kerry, James O’Connor seldom spends much time at home as he travels the country with his shearing business.

Many would think that the shearing season is limited to the summer months, but this farmer’s season continues for 9 months of the year.

“The summer would be the main shearing season,” O’Connor explained, “but I would be shearing lambs and ewes from August onwards that are going into sheds. It’s a great job with lambs because you can fit more in and they will stay cleaner.”

The Kingdom native travels all across the country, working in Connacht, Leinster and Munster, and shears nearly 40,000 sheep each year.

It’s a numbers game in this business, as James told That’s Farming that he expects to shear between 35 and 45 sheep in an hour, depending on the type of animal.

“I shear for one man in particular and we could be shearing anywhere between 10 and 12 thousand lambs for him in the winter.”

That kind of work and output could be deemed as stressful to many, both mentally and physically, but its something that this shearer loves doing.

“It’s a job I enjoy and like doing. I suppose when you’re at it all the time you get used to it.”

“It is like a sport and in my opinion, and a lot of shearers would agree with this, it’s highly unrecognised for what it actually is. It’s not as easy as people think it is.”

The Kingdom native also used to offer a dipping service alongside his shearing, but found that there weren’t enough hours in the day and the economics just weren’t viable

“It was a good success, but long-term there was more money out of shearing and it’s not ideal to be breathing in those chemicals all the time,” he recalled.

At home, James farms 100 Lanark ewes and contract lambs for other farmers during the spring. He said that none of it would be possible without the support of his wife.

“My wife does most of the farming while I’m away for the summer shearing. She’s a city woman, from Limerick City, and she moved down here with me after we got married. Now she would never look back.”

“She’s mad about sheep in fairness to her and she’s handy at the lambing – she’s well able to work away herself.”

Lambing on the O’Connor’s farm took place between the 10th of March and the 1st of April this year with their pedigree Lanark sheep.

“The Lanark are a good solid sheep and it’s easy to sell the lambs off them because they finish well. I pick out what I want to keep for breeding stock and sell the rest of them as stores between 36 and 42 kilos.”

Being the busy man that he is, James told That’s Farming’s Cian that he enjoys the time at home lambing his own sheep and teaching his children about life on the farm.

“It’s not ideal being away from home all the time, and only for herself being so good on the farm, it just wouldn’t work. You can’t burn the candle from both ends unfortunately.”

“When I am home, I like bringing the kids around the farm and giving them an appreciation of what work actually is and where money comes from.”

The belief that the future for sheep is bright is clear to see from his eagerness to teach his children about the ways of the land, but, for there to be a future, he believes that some farmers need to change their ways.

“Farmers need to go back to the basics and start making their farms more profitable. Especially on the hill farms, they need to start making their stock pay for themselves, rather than dig into their single farm payment to cover costs.”

“There’s a big issue of people farming just for the payments because it’s not fair on the people who want to farm and will put the time and effort into trying to improve their farming system.”