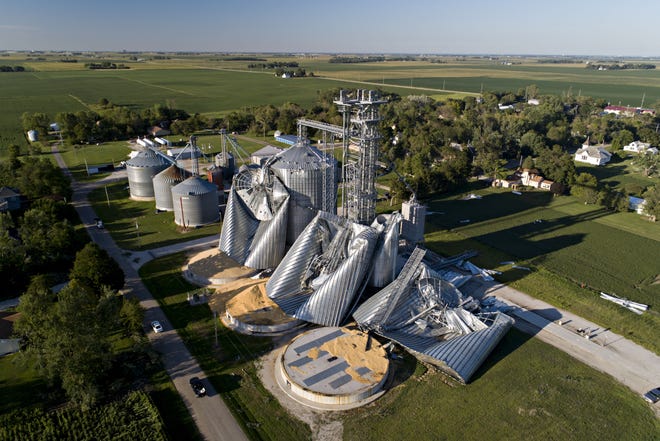 PHOTOS: Over 10 million-acres of farmland destroyed after storm in US

Over 10 million acres of soybeans and corn, along with millions of bushels of farm storage bins, have been damaged after a storm ripped through multiple states in the US last week.

A number of deaths have occurred following the storm which swept across Iowa, Illinois, Indiana, Wisconsin, Michigan and Nebraska.

Several GoFundMe pages have been created to support the mid-westerns who are reeling following the storm which occurred on Monday, August 10th.

In a post on social media, West Central Equipment, said: “Hundreds of thousands of residents are without power, countless homes and structures were destroyed, and millions of acres of farmland were flattened.”

“2020 has already been a rough year for our farmers and we hope that all who have been affected will be able to recover quickly.” the post added.

“Due to the tremendous outpouring of positive support and questions from some of you on how you can help, we are inserting a link to various gofundme.com charities that you may research and donate towards.”

“It is so encouraging to see the care and concern for not only the farmers, but all affected Mid-Westerners as well in their time of need. Thank you! https://www.gofundme.com/c/act/derecho.”

Amanda Jondle and Lindsey Parson are among those who have created a GoFundMe page, entitled Support the Family Farm. “Hi, friends and family. Internet and phone service are basically non-existent in Iowa so we haven’t been able to post updates as much as we would like.”

“Everyone is hanging in there. We have received so much love and support both in funds, food, and physical help from many neighbours, friends, and family.”

“All 4 kids arrived right away bringing generators, food, water, tools, construction supplies, and more. Within the first 24 hours, the house had running water (cold only) and some electricity. Thankfully, the weather has been bearable!”

“The office that was completely water damaged has been cleaned, the carpet torn out, and window boarded up.”

“Paths are being cleared for equipment to eventually come through, space for large dumpsters is cleared, the hay has been taken out of the barn, deceased animals are now buried, a burn pile was started for brush and destroyed barn wood, and tarps are being put up over hay and open roofs.”

“Mom was supposed to start school this week but was able to postpone until next week when things are hopefully under more control.”

“We are making progress in many ways! Thank you so much for your love and prayers!”