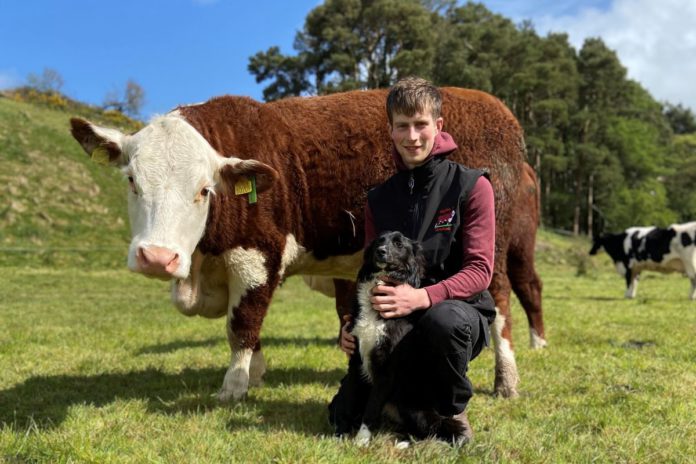 ‘I believe polled is the way forward’ – young breeder

In this week’s Suckler Focus, Neil Twomey speaks to That’s Farming about establishing his Ringfort 1 pedigree polled Hereford herd and the highs and lows of his experience so far.

The journey Neil Twomey, Banteer, County Cork, has undertaken in the last five years is proof that he is a resilient, determined, progressive cattle breeder.

At the age of 16, in 2016, he established his own Ringfort 1 pedigree polled Hereford herd with the purchase of a sole in-calf female.

Neil, a full-time electrical apprentice with Philip Walsh Refrigeration and Electrical, had a burning desire to establish his own herd on his father’s (Tim) dairy and suckler farm.

“I decided to go for homozygous polled Herefords as I believe polled is the way forward. Farmers need any small bit of relief to make their jobs easier, and no dehorning is a big help,” he told That’s Farming.

“My foundation female had a bull calf in August, but sadly, the calf was blind and died due to being underdeveloped internally.”

“Things did not get much better for the heifer with the difficult calving causing her to fail to go back in-calf for the following year, but that did not hold me back.”

“In 2017, I purchased an Apple cow, bred by John Appelbe, with a heifer calf at foot from William O’Brien’s Ballymartle herd. Also, I purchased an in-calf heifer from Liam Philpott’s Allowdale herd.” 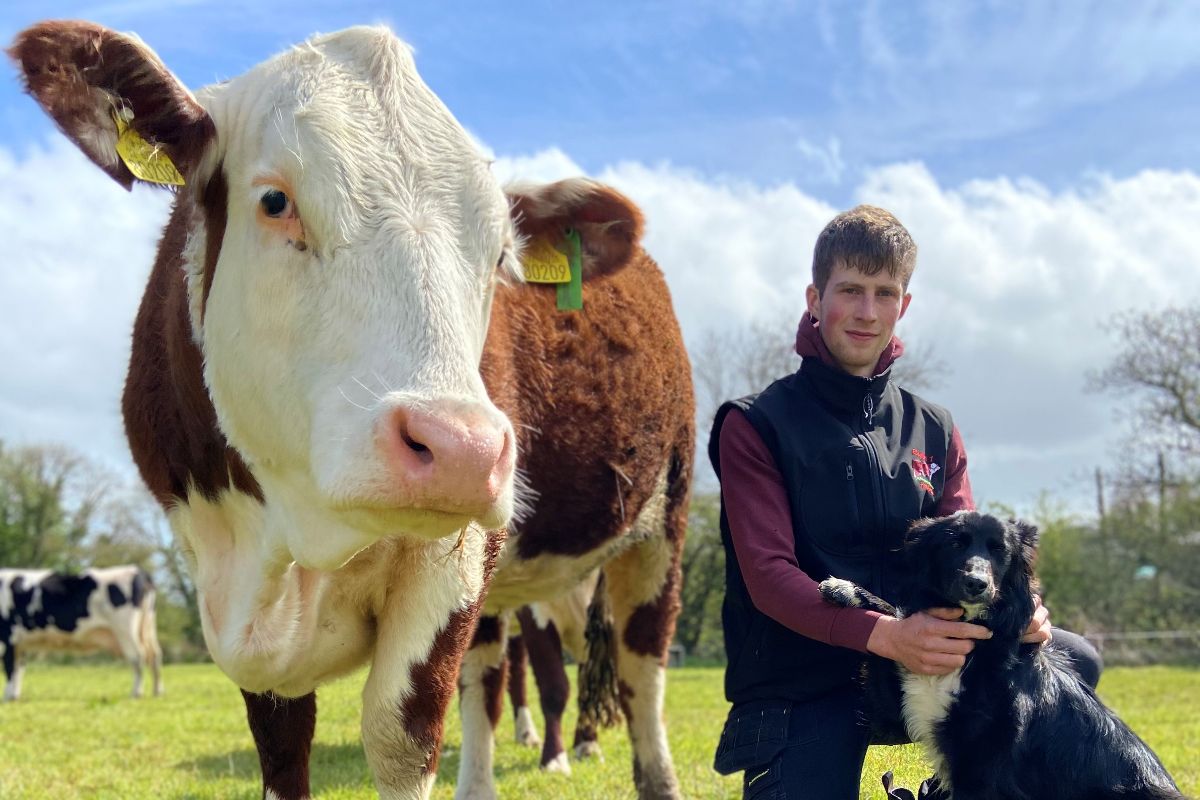 The loss of three females

These females set the groundwork for the new breeder, who later acquired stock at the Ballymartle dispersal sale in 2019.

Whilst the Cork native had some productive seasons, he has lost three foundation cows in recent years due to various reasons.

“One related to a failure to get one cow back in-calf. Another cow got a set on me after calving, while I had to cut one of the most promising cows due to an issue with her pedigree certificate.”

“All these issues have hit me financially hard, with the cert issue causing two bull calves she had to lose their pedigree status and value.” 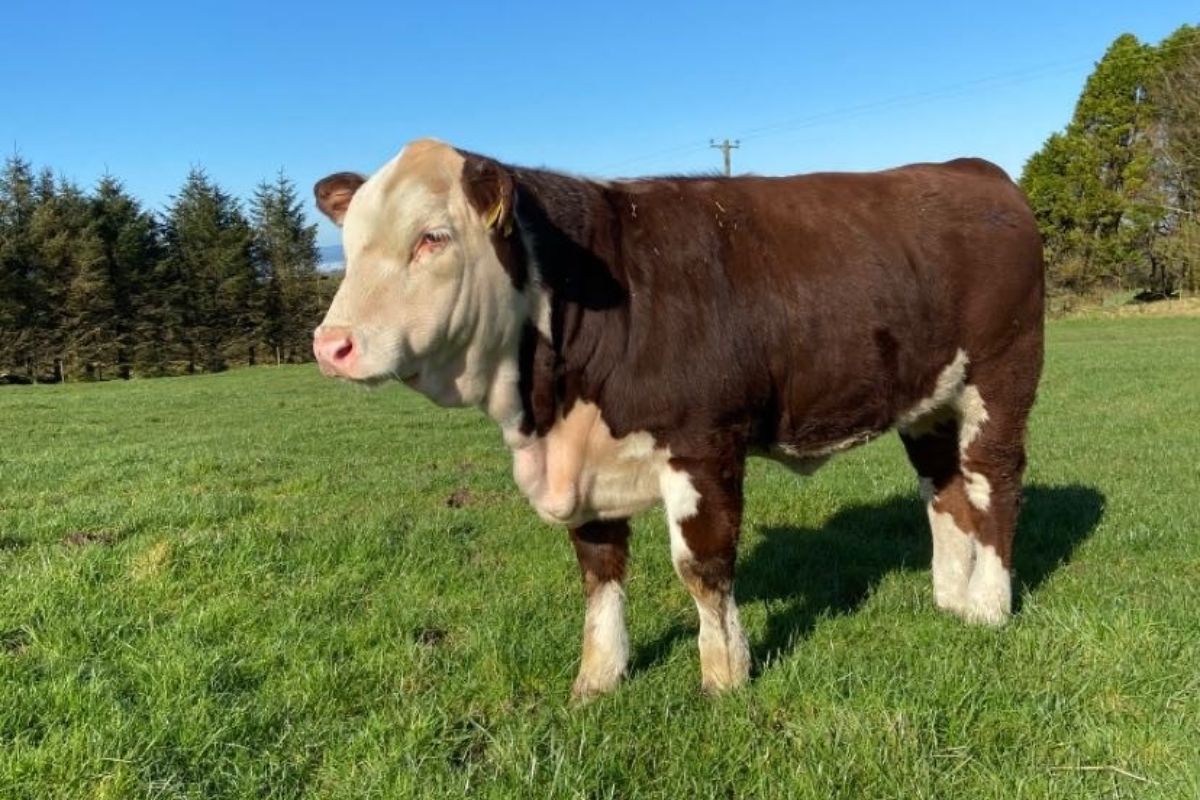 Neil now has a young herd of four, made up of a third-calver and three first-calvers. He bought one of his first-calvers from a herd in Wexford for her outcross breeding, coming from Udel bloodlines.

“We have two farms, 72-acres on the home farm where we milk cows, and 105 on an outside farm from three miles away in Lyre where we have the Friesian heifers, calves, Angus stock, and usually all the Herefords. This year, I started leasing 6-acres where the herd of 8 are and a few more drystock.”

“I feel like the breeding circle of the polled Herefords in Ireland is after getting small and is dominated by certain sires.”

“Therefore, my main breeding focus for the future is breeding something new. This has led me to consider importing genetics. I have one female calf coming through, and I will keep her on to expand the herd.”

He uses AI sires from Progressive Genetics and Eurogene as he believes the herd “is too small to justify a bull”. He noted the benefits of AI from a management perspective and its ability to steer his breeding programme “in the right direction”.

When selecting sires, ease of calving is top of his list, followed by milk and carcass weight. Bulls that the Cork native has utilised with satisfaction, to date, include Fabb 1 Northern Star, Moorside 1 Panda, and Fabb 1 Nutcracker. 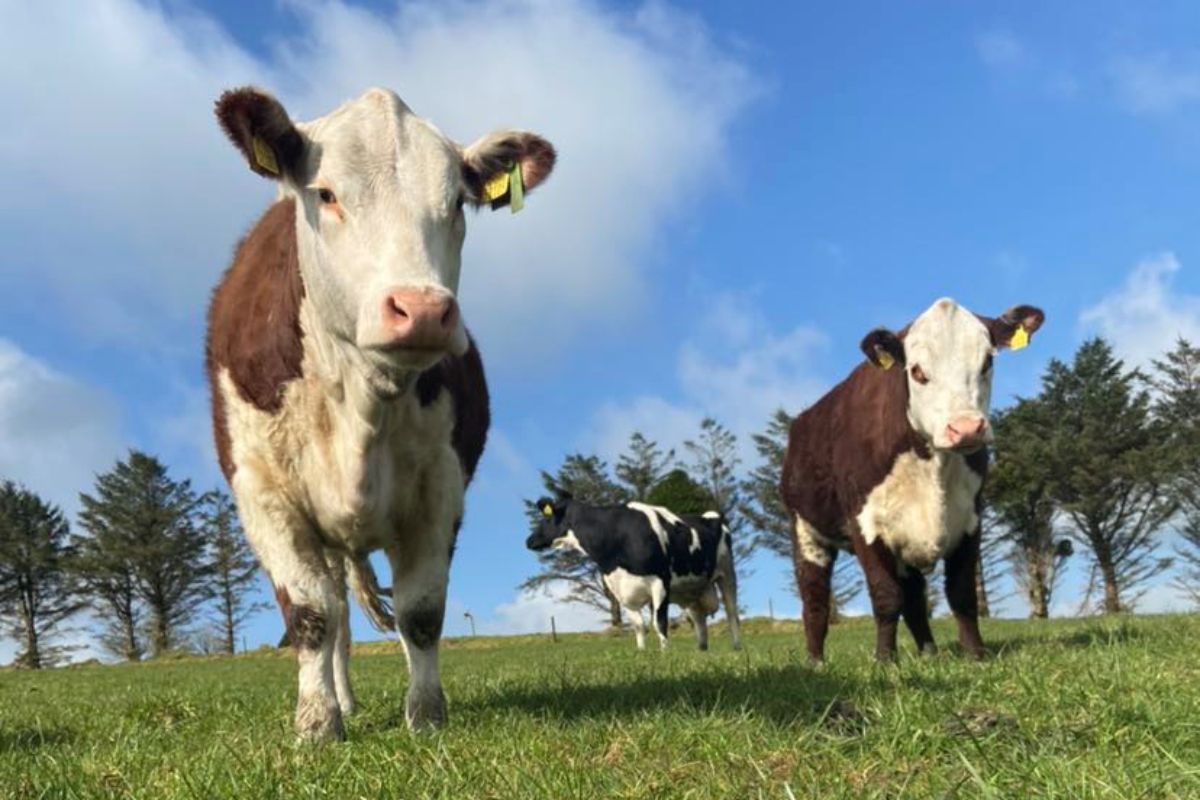 In Neil’s view, an ideal cow is “one with plenty of milk and can produce a calf that puts on weight with low input”.

“I like to see a good ‘milk mark’ in the animal because I believe it is a clear sign the milk will be there. The cow I have has bags of milk, and the bull she is rearing was 420kg at eight months. I am also trying to get more of a deep red colour back into the herd.” 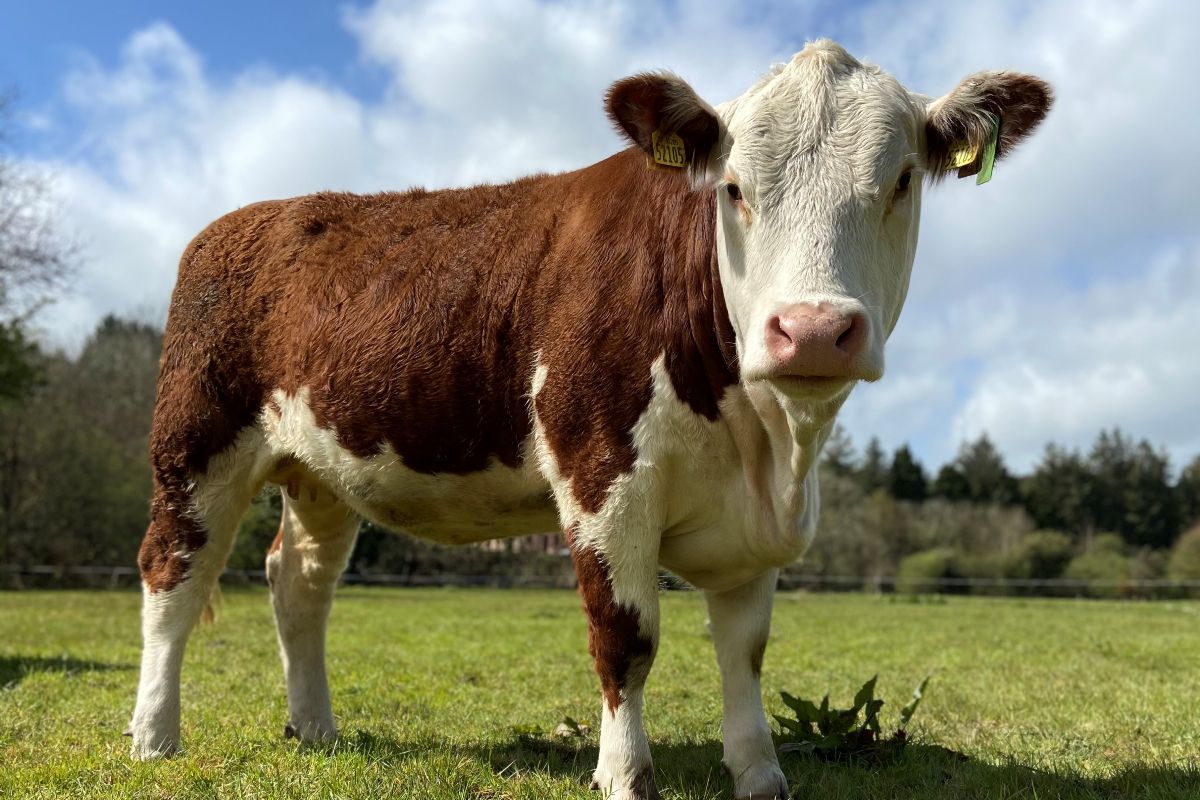 In terms of targets, he calves his herd in autumn as he strives to meet demand for Hereford breeding bulls. Besides, he aims to calve heifers down at two-years-old as he finds that “if they calf over that, it could lead to weight problems”.

“With autumn calving, the focus of the summer is to keep the weight down by strip grazing them hard and keeping their calves under them for longer. I use a creep gate to allow the calves grass and also give them some ration.” 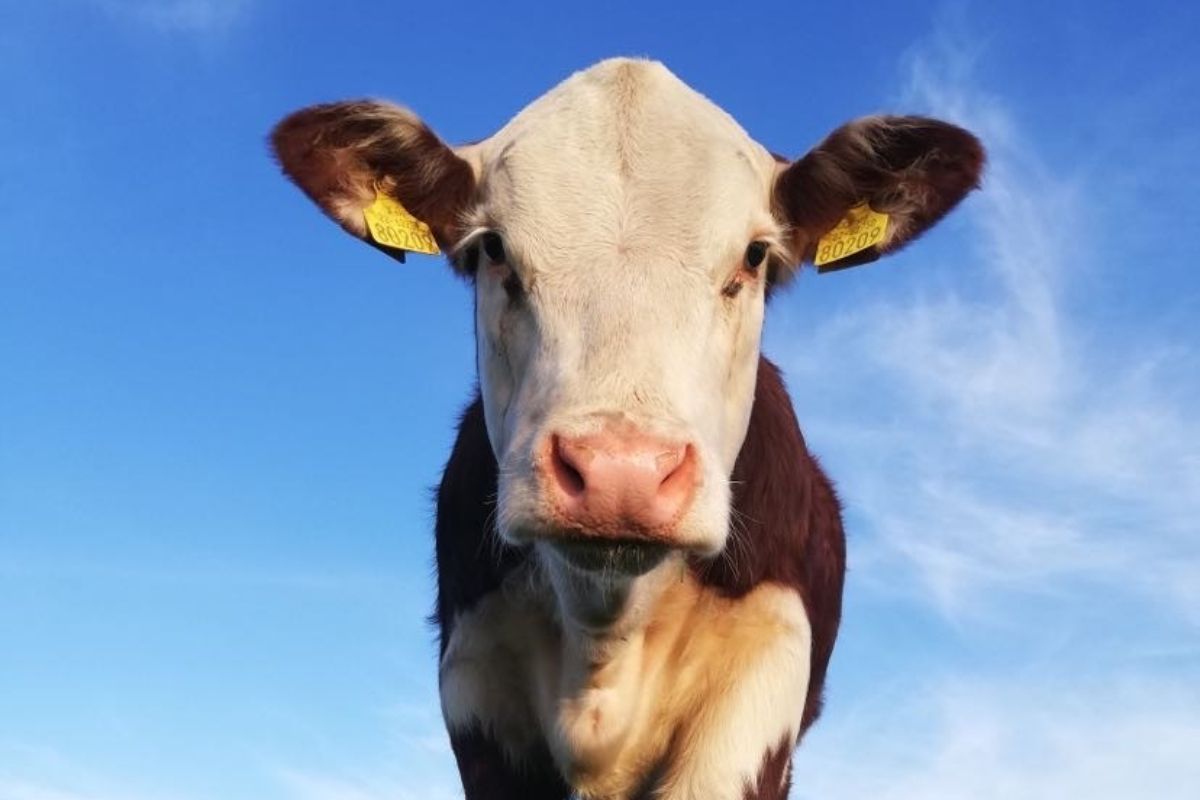 Hoping to make a mark

“The trade for Hereford bulls has been a bit of a rollercoaster with some sales getting good prices but low selling percentages and the next sale the other way around. In my view, the number of bulls on the market does not suit the situation. Nevertheless, I managed to sell both bulls I have this year out of the yard.”

“We believe to keep a successful suckler operation going, every cow has to produce a calf with a high weaning weight every year, or else you have to cut your loss.”

“Covid-19 has impacted how we sell and promote our breed and herd, with restricted sales and the cancellation of agricultural shows. I found that shows were really important for me, as a new breeder, to showcase my stock and try to build a name for myself to help sell cattle.”

“My Hereford breeding journey has been a bumpy one so far. However, I am determined to breed good quality stock and hopefully make an impact on the Hereford breed in Ireland,” the pedigree polled Hereford breeder concluded. 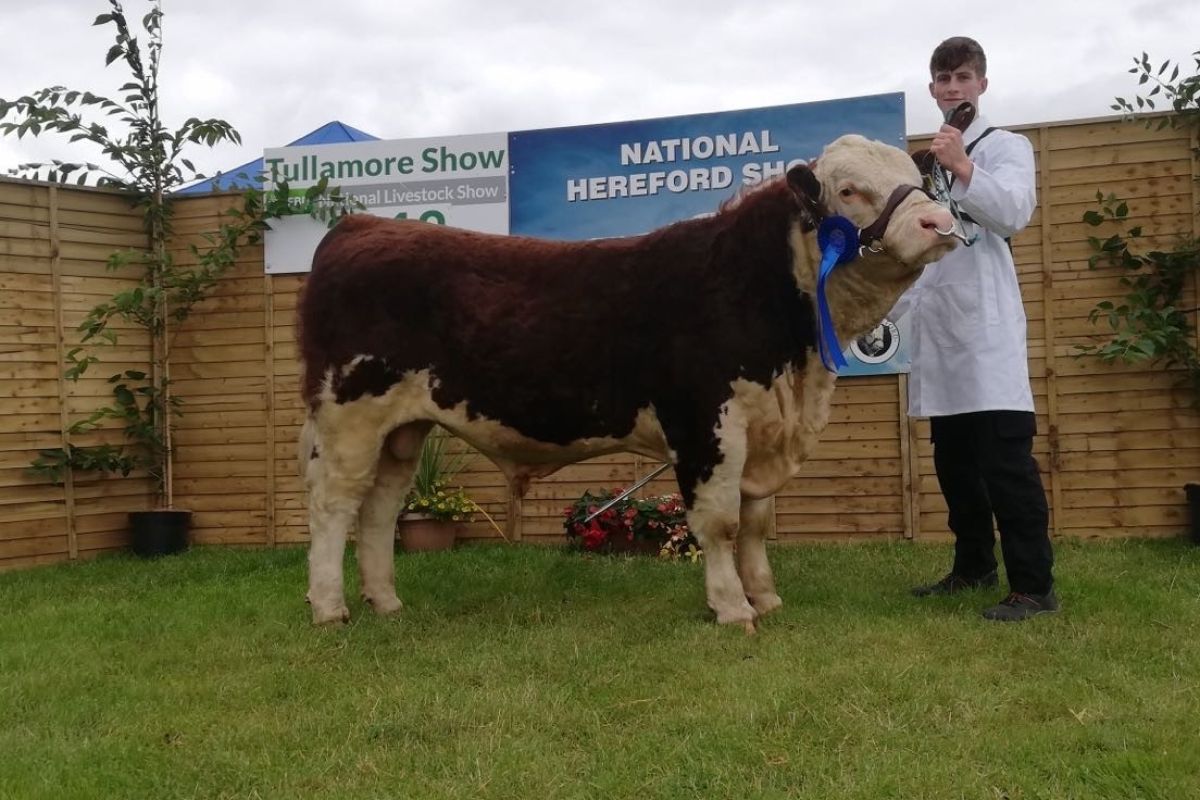