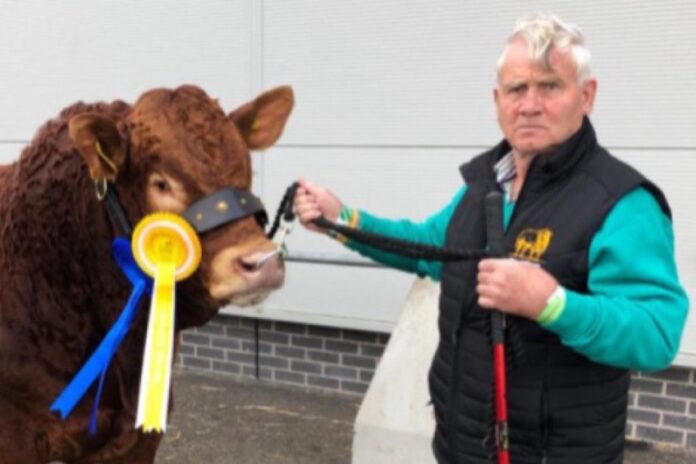 In this week’s Suckler Focus, That’s Farming, speaks to Newhillfarm Limousins. Ryan McPolin discusses how his family converted their suckler herd to 100% pedigree and calving in a three-month window.

The McPolin family from County Down have been breeding pedigree Limousin cattle all their lives. Michael McPolin and his sons, John, Mark and Ryan, operate the farm.

The family always operated a few pedigree Limousin cattle on their farm but fully transitioned to 100% pedigree in 2018.

All three brothers attended Greenmount Agricultural College, have off-farm jobs and run the farm on a part-time basis.

“We just had an interest in the pedigree cattle. In 2018, we got rid of the last commercial suckler cows,” Ryan McPolin told That’s Farming.

“So, instead, we are honing in on pedigree cows and trying to breed the animal type we want.”

The family continue to breed the same cow type as their father, with the 2000 era being their last years to acquire new bloodlines.

Their ideal cow will calf yearly within their tight calving block and “produce a sale-topping calf but not at the expense of her maternal characteristics”.

“The reason we chose Limousin is because they make fantastic suckler cows and suited our under 16-month bull system perfectly.”

“We did not need to crossbreed to get the ideal suckler for our system. So, we thought, why not just keep doing what we were doing with the pedigree cattle?

“The Limo project in Greenmount Agricultural College back in the 2000s displayed the utility of the breed.”

“That is what we were finding on-farm, an excellently balanced animal between maternal and terminal characteristics.”

“It is often quoted that there is as much variation within a breed as between breeds. We find this to be true with Limousin cattle.”

“You can get a Belgium blue-type by following myostatin profiles and picking a bull with two NT genes, or you can pick a large Charolais-type or a smaller, fleshier Angus-type. The breed’s scope is amazing.”

The County Down family begins the breeding season of the main herd in November and concludes in February.

Their stock bull, Lynderg Rembrant, which they purchased from breeder Jim Quale, serves the bulk of the cows. “Lynderg Rembrant was reserve junior male champion at Balmoral Show 2021. I had 60% of my cows served to him and I took semen from him.”

“We are very excited for his first calves to hit the ground. We really think he will propel the herd forward if he breeds anything like the way he looks.”

Some of the main AI sires the family uses include Foxhillfarm Jasper (LM4067) and Mereside Godolphin S1630).

“In my opinion, the genetic pool is pretty good. However, it could be better if we could get access to more bulls across the waters.”

“Every cow is matched with a bull that we think will breed the best possible replacement.”

“We keep a lot of records to bring as much information to the table as we can in order to make the most informed breeding decision possible.”

“This is necessary if we are to keep the functional regular breeding cows were aiming to produce, which may become a necessity in future.” 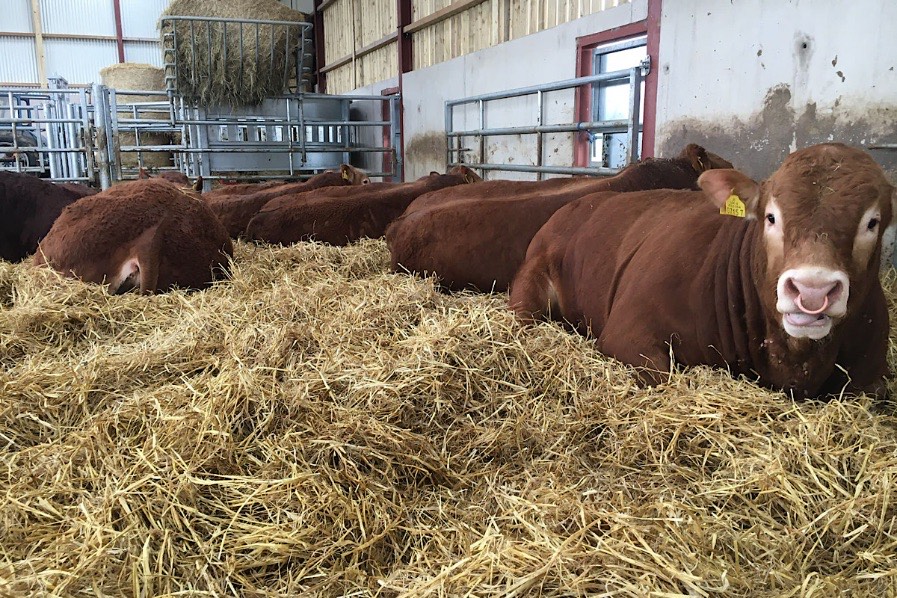 They aim to calf their heifers a few weeks before cows, with all the herd calved by mid-November.

They choose this period – due to its less labour, being able to calf them outdoors and having bulls at 16-18-months-old, for society sales.

“We calf outside because we find cows calf better, and are cleaner, healthier and fitter. With us all working, cows have to fend for themselves twelve hours a day, so they are better outside.”

The family aim for a compact calving period by focusing on genetics, herd management and nutrition.

“We feed cows a top-spec Devenish pre-calver mineral for at least eight weeks pre-calving and a minimum of 12 weeks for heifers.”

“Then, cows get hay when springing. We feel this has had a massive help with calving.”

According to Ryan, cows require very little intervention for the “most part” during calving, and the herd’s average calving interval stands at 368 days.

They breed heifers at the first season, between 12-15-months or over this age.

“We begin breeding heifers in November, and whatever age and weight they happen to be, they are bulled. If they are cycling, they get an AI straw.”

“We used to watch weights like a hawk but found it takes care of itself, really. Housing space historically is probably the main reason why we calf cows on their second season.”

“Going forward, there is talk of a payment for calving heifers down under 27-months, and you get a £150 payment for that age.”

“We want to have our system well geared up to catch that £150. It would be foolish of me not to catch it. I do not see why you would let a heifer run to two-years-old and miss out on a £150 payment.”

The Down-based family retains most of their heifers to-date and sells the rest off-farm.

However, Ryan noted that heifers are for sale at any stage- depending on customer requirements.

“This year, we will be selling eight heifers which we would not have normally done, but we have pretty much grown the herd to the desired size.”

“So, from now on, we will be selling a number every year as we will only need enough to replace the culls.”

“The aim is to keep as few heifers as possible each year. However, that will not happen until we are at a stable number in the herd.”

They sell the majority of bulls for breeding from 16-18- months-old at Northern Ireland Limousin Cattle Club sales in Dungannon and Ballymena Mart and sell the remainder off-farm.

Male progeny that develops problems will not go for breeding.

“Cattle are a ripping trade at the minute. Newhillfarm Paddy topped this at £5,000 at the May sale in Ballymena.”

The family advocate a strict culling policy on cows not suitable or due to age- grading U’s and Es with a 65% kill-out rate.

“We feed cows concentrates a month before killing them as it gives you a great return. A good continental cow will respond well to meal.”

“You would be a fool not to feed her a month before because feed price vs carcass gain is more than rewarding enough to do it.”

“You could kill them off grass too, and they will grade very well, but you are missing a trick excluding the bit of extra feeding.”

“It does not matter what feeds costs are; what matters is how much it is costing you to feed the animal and how much carcass value you get each day out of feeding her.”

“So, in my view, as long as carcass value is higher than inputs, that is all that matters.”

“The likes of a pedigree Limousin cow or any decent continental cow going for culling would make halfway between cull cow and heifer prices. So, there is fantastic value in them.”

The family manage grassland by applying fertiliser to soils to maximise grass yields and undertake lime spreading and grass reseeding.

“These are to reduce worm burdens, give the best grass to calves and restrict grass to dry cows to prevent over conditioning.”

Achievements and the future of suckler farming

Ryan is proud of the family’s achievements as he looks to the future, winning the best medium suckler herd in 2009 in the Northern Ireland Limousin club’s herd’s competition.

They plan to calf in a 10-week block and grow the herd to a 50-60 cow suckler herd in three years.

“The aims for the future are to breed a herd of show-winning/sale-topping cattle but not at the compromise of maternal qualities.”

“We are currently 90% the way there on the maternal front, and now it’s just a matter of improving the quality of the cattle year on year.”

“The policy we implement may seem contradictory to many, but it does not have to be.”

“It will, however, just make the journey tougher and slower, but we will get there. Genetics is like a seesaw, and blindly over selecting for one trait will lead to the compromise of another.”

“This was seen in the broiler and dairy industry in the past, placing too much emphasis on production at the expense of functional traits.”

“If you asked me last year whether there was a good future in suckler farming, I would have said yes, there is definitely a good enough future.”

“However, until after the climate change bill is passed, I cannot answer that question because I do not know what the future holds.”

“It will depend entirely on climate change policy. I cannot foresee a situation where there are no sucklers, but the status quo probably will not be the future.”

“Things will change in some way, but how they change, your guess is as good as mine,” the owner of Newhillfarm Limousins concluded.