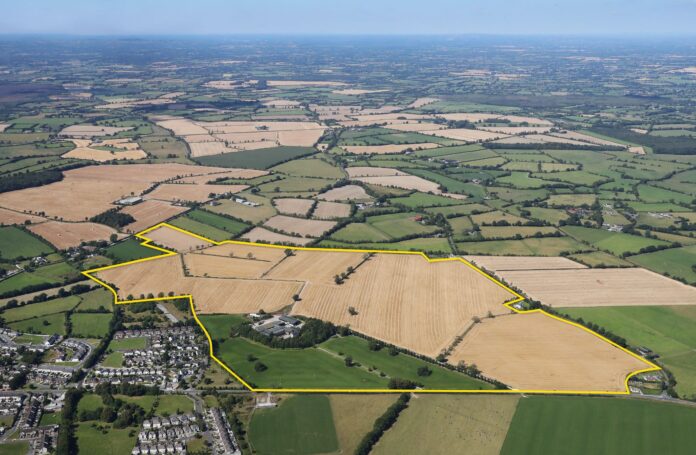 A prime County Meath tillage farm, extending to circa 182-acres, has sold for over its guide price of €3 million.

The farm, which Savills and Loman Dempsey Property Consultants, put under the hammer on Tuesday, October 11th, 2022, sits on the fringe of Ballivor.

As featured on That’s Farming previously, the property consists of a historic period house and extensive farm buildings with winter accommodation for about 550 head of cattle and 3,000 tonnes of grain storage.

The “productive” tillage land is a “key” feature, being suitable for growing a wide range of arable crops and lying in a ring-fenced block with “extensive” road frontage.

Ahead of the auction, the agents said: “The fields can produce high yields of the full range of cereals and root crops. They are of a good workable size and layout for modern agricultural techniques.”

“Access to the fields is excellent, with frontage onto three roads and a hardcore internal farm road.”

Three fields adjoining the house and yard are presently in grass and are fenced and watered for livestock.

In addition to tillage crops, the owners previously operated a beef-finishing enterprise in Parkstown

According to the joint selling agents, there was a “super” attendance on the day, with interest from the farming and business world making up the 40-person crowd.

Parkstown Farm attracted bids from parties living in Ireland and abroad before Trim auctioneer, Loman Dempsey, dropped the hammer at €3,150,000, with the buyer believed to be Irish-based with farming interests.

James Butler, head of Country Agency at Savills, commented that the sale of Parkstown Farm shows that large-scale equipped commercial farms continue to “attract demand” from international and local cash buyers who are attracted to farmland as a long-term investment, which serves as an “inflationary hedge” and offers conservation opportunities, in addition to food production.

Other properties for sale: