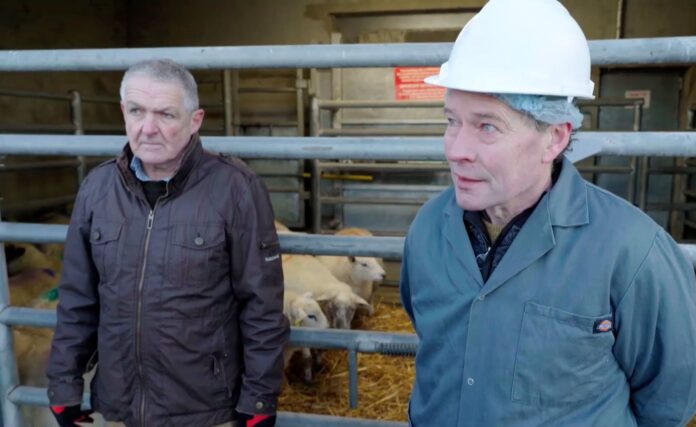 In Co Louth, second-generation butcher, Martin Commins, is bucking the trend by re-opening an abattoir on his family farm, which is close to his bustling butcher shop, to make his business more sustainable.

Like others in the industry, over the years, his family business has adapted and evolved to meet ever-changing consumer demands.

His father, Kevin, initially opened the abattoir in 1965, but when he retired eighteen years ago, escalating costs meant that Martin had to shut this arm of the business.

The Commins family featured on the most recent episode of RTÉ’s Ear to the Ground on Thursday, January 19th, 2023, during which they provided an insight into the past and current running of the business to presenter, Darragh McCullough.

Martin told McCullough about why it closed initially: “I had to come out from the shop to the abattoir, and it was not viable because I had to get people to replace.”

“Also, then insurance went up crazy. The shop and the abattoir used to be under the one umbrella, but we do it individually now.”

“It was not practical, as they were looking for something like €15,000 at the time. So I did the figures, and I did want to, but I had to close the abattoir.”

“In the early 1990s, we spent an awful amount of money. It was not an easy decision at all; there were tears because you put your life and soul into it,” he added.

“My dad started when he was a very young man, and he built it up, so it was not a decision that we took likely.”

The abattoir’s re-opening came about through the Covid-19 pandemic, as, like many businesses, Martin saw increased custom during lockdowns.

“We were very busy, and our business was up 70-80% at times, which was unbelievable. So, I just looked over at the abattoir one morning. My younger son said, ‘dad, will you just go for it,’ and that was the little push that I needed.”

Martin’s abattoir is one of only 75 such surviving facilities operated by butchers nationwide, processing beef and sheep.

“I am only killing heifers for myself, sometimes, two, three or four heifers every other week,” he added.

Regulations have been stricter in recent years, and the bar has risen regarding standards imposed by Ireland’s membership with the European Union since the 1970s.

As the presenter outlined, many of the 1,000 abattoirs dotted across the country closed in the wake of these new controls.

But, 80-year-old Kevin, who continues to assist in the shop when required, is optimistic that trade will continue at Commins’ Butchers into the future.

“My elder brothers were working on the farm. There was no room for three, but my parents saw an opening for a butcher shop for this end of the town.”

“They thought it was a good idea, so here we are today. Back then, there was no prepared food and meat was cut as required.”

“When I opened up, there were five butcher shops in Ardee, and now there are two. I can see us here for the immediate future anyway.”

“People want quality, and they do not mind paying for quality food. We base our business on having quality food.”

“If we are competitive enough and have the quality, I see no good reason as to why it will not carry on,” he concluded.

- Advertisement -
Previous article
‘The real potential value is in the fifth quarter, which farmers are giving away’
Next article
How smart farming may change our work and lives