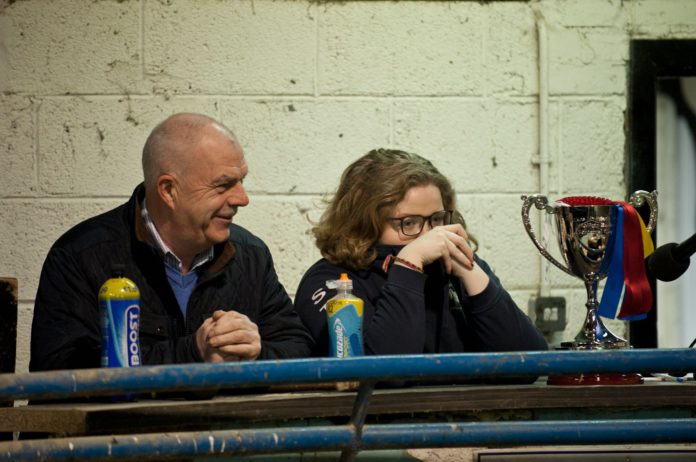 Behind the Hammer: ‘Auctioneering was always my party piece’

Once you hear filler expressions; ‘Put it over the bar’ and ‘The one in the ring, the one in the ring’, echo around a mart ring, you know Peter McDonagh is on the rostrum, writes Catherina Cunnane, editor of That’s Farming.

The Corofin, Tuam, Co. Galway native, who grew up on a 70-acre suckler and sheep enterprise, left school at the tender age of twelve, due to his father’s ill-health. The champion sheep shearer has been overseeing the running of the farm ever since and attended Mountbellew Agricultural College in the early 1980s.

Little did the Galwayman know that his involvement in the sheep shearing circles would pave the way for a successful, accidental career path as a livestock auctioneer.

“I have been involved in sheep shearing. I started doing some commentary at sheep shearing events, with George Graham,” he explained.

“In 2005, the shearing was held in Clonbur. I was involved with a local group who asked me to sell at their charity auction, following on from my commentary at that event, so I did that.”

Another opportunity came his way in 2008, when the late Eoin Burke took over Maam Cross Mart. “He was stuck for an auctioneer one Saturday and he rang me to ask me to help him out.”

“I had only ever sold pictures and paintings at local fundraisers – I was nervous, but I knew a lot of people there who were involved in shearing, so I agreed, and I have been auctioneering ever since.”

“When we were younger, we used to have craic in the local pubs where some would sing a song, others would dance; auctioneering was always my party piece.” Peter laughed.

Peter, who holds a category A licence, has been officiating as auctioneer at several cattle and sheep sales ever since; he can be found dominating the rostrum at Aurivo Ballinrobe Mart, Headford Mart, Maam Cross Mart and Tuam Mart.

“Up until this year, my work has been quite seasonal. Once the end of June comes, Maam Cross Mart has two sales per week – sheep on Saturdays, where I sell the ewes, and I sell cattle there on Mondays from June onwards.”

“I sell sheep at Ballinrobe on Wednesdays and when sales get bigger, weanlings are sold on a Monday morning.”

On Saturdays, when travelling home from Maam Cross, he ventures to Headford Mart’s weanling ring. “Lately, as it is the time of year where I am not in Maam Cross, I have started selling in Tuam on Monday nights and on Tuesday evenings, selling lambs.”

“You have to be able to mediate between both parties, the buyer and seller – You have to try to get enough for the seller, without robbing the buyer.”

“I always have a bit of adrenaline before I start selling and I am rearing to go. Once I have the first five cattle sold, I know my flow, I know the feel of the cattle and the price of them.”

“You need to be able to judge the price of cattle yourself when you’re selling As the animal climbs off the bridge into the ring, you nearly know who is going to buy the quality lots, and whose name you will be putting down for the lesser-types; this comes from years of experience.”

Peter admitted that livestock auctioneering is not for the faint-hearted and that it can be difficult to find your feet in the industry and secure employment.

He reiterated that experience is something that you cannot buy, especially in this tough game, but he provided some useful advice for young auctioneers.

“Don’t get caught with stock – it is very easy to do this when you’re young and inexperienced.

“You can be selling away at a hundred miles an hour selling, but you better have a name to put down for that beast when the hammer falls.”

“When I started out, a mart manager gave me some good advice: ‘Just before we start, remember we have no grass.’ I had twenty cattle sold before those words really struck me.”

He warned young aspiring auctioneers to be aware that there are only so many job opportunities and marts, so they should, therefore, make themselves as employable as possible by attaining all licence categories.

“As a young auctioneer, it is difficult to get going in marts. Some only run one day per week and that is no good to a young person.”

“I would encourage anyone who wants to be an auctioneer to go for it, as we all have to start somewhere, but be aware of the challenges.”

Peter is hopeful that his youngest son, Kieran, who is a student at Mountbellew Agricultural College and also commentates at sheep shearing events, will follow in his livestock auctioneering footsteps.

His eldest son, Shane, is also carrying on the family tradition; he runs a plant hire business alongside a sheep flock, while also assisting with the running of the family’s 40-strong suckler herd.

“You just have to have a love for auctioneering. When you get up in the morning, you have to look forward to going to work. If you are going to work against your will, you are not in the right line of work.”

“I have to compliment marts and their managers, who over the last number of weeks, made every effort to facilitate sales, while adhering to HSE public health guidelines and implementing safety protocols.”

“I hope that normal trading will resume at marts shortly and that everybody stays safe during the current Covid-19 outbreak. Without marts, especially here in the west of Ireland, we are lost.,” he concluded.

If you are a livestock auctioneer and you want to share your story, email – catherina@thatsfarming.com

- Advertisement -
Previous articleReports of some farmers not obeying social distancing
Next articleQUIZ: How well do you know Crimebusters?