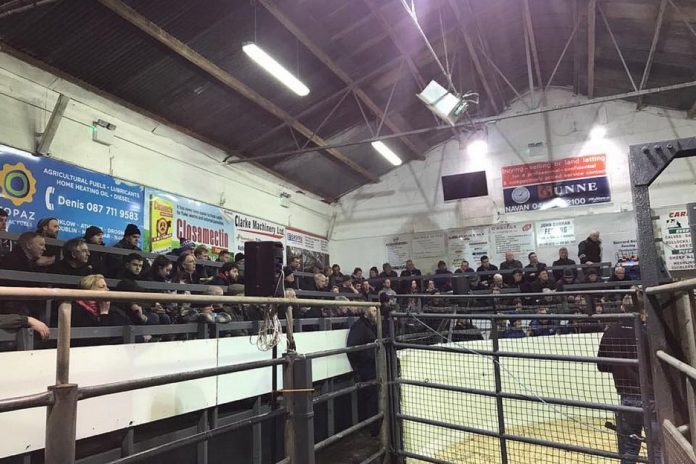 Ireland’s first virtual cattle mart – how will it work?

The mart, which opened its doors just outside Kells in Co. Meath in the 1960s, sees almost 2,000 cattle and sheep go under the hammer weekly.

It changed software provider to avail of new technology which Livestock Live was spear-heading to enable them to become more efficient.

In 2019, LSL approached the mart with the concept of adding live streaming and online bidding, to assist those who could not attend sale days. The system was installed in January 2018 which allowed the mart to use web-based technology.

Speaking to That’s Farming, Padraig McElroy, manager of Carnaross Mart said: “We were excited about the new module being added and worked with LSL as they installed cameras and tested its online bidding platform.”

“One key element for LSL was to be sure the animals could be seen as real to life as possible, and the streaming of online bidding was in real-time with no delay.”

The company finalised their testing during the mart’s cattle sale on March 24th, the afternoon before the Government announced the blanket closure of the marts.

On Monday (March 31st), the Department of Agriculture, Food and the Marine (DAFM) confirmed that it would allow livestock marts to reopen to provide limited services, as reported by us.

“As soon as the announcement was made on Monday, the Livestock Live team were on the case and uploading the latest software they had developed to bring the mart back online. They said they we could run a completely virtual mart.”

“I was not really sure what they were talking about but when they explained they would reconfigure the software so all bidding would be done from outside the mart using the LSL app or website for PCs.” the mart manager admitted.

The Irish agri software company has set up a virtual mart on their platform for Carnaross and a number of other marts across the county.

Carnaross has included a ‘Live Online Auction’ button on its website which brings its clients to a virtual sale.

All animals are checked into the mart and issued lot numbers and put in pens as normal. “We can let two people in to view the lots at a time when the animals are in the pens. This can be done for a number of hours before the sale starts.” the manager explained.

A catalogue list of all lots for the day will be available to view. As the animals are weighed and enter the ring, all the information is displayed on the virtual mart board which would normally be available/seen in the mart.

“Sellers issue the mart with a reserve price they want for the lots at check-in and it is entered in the system.”

Buyers and sellers can log into the auction at https://www.carnarossmart.com/, click ‘Live Online Auction’ and they can see the lots in the ring as if they were at the mart.

“We have our auctioneer as normal managing the ring, calling out the bids as they come in online but the bidders and seller can also see each bid.”

“The whole system is in real-time with almost zero delay. The successful buyers arrange to come to the mart to collect their animals.”

Gardaí stop sheep trailer with tyres ‘well past their prime’