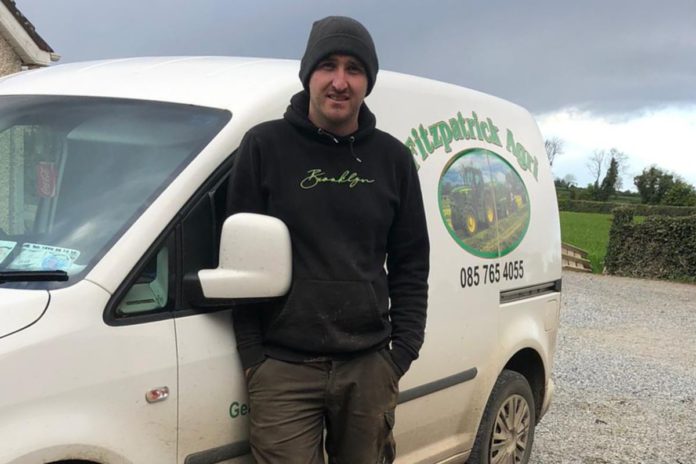 As part of our Agricultural Contractor of the Week segment, That’s Farming, speaks to Tom Fitzpatrick from Fitzpatrick Agri about celebrating eight years in the business, his passion for John Deere tractors and future investments.

Agricultural contractor, Tom Fitzpatrick, (28) from Geashill, Tullamore, County Offaly, is celebrating eight years in business and is supported in the venture by his mother, Fiona and his father, Martin.

Commenting on his background in agriculture, he told That’s Farming: “My grandfather,  James Conroy, would have had a big farm, and I spent all my time doing stuff with him until uncle Terence took it over in August 2007.”

“I would have been up there [in grandad’s] the whole time. We used to take in corn, and a lot of people came to us drawing corn. We would be on the weighbridge pushing corn into sheds and running around like madmen; someone had to do it.”

In 2012, Tom enrolled in Gurteen Agricultural College, where he completed a two-year programme. After the first year, he took a break from college, and utilised this time to lay the foundations for his business, Fitzpatrick Agri.

“They did not do the tillage course when I was there. The college did not have the numbers for it; that would have been a level 6. I just finished out the level-5 and-a-half course to get me my Green Cert.”

“I find it is beneficial if you get out and do the job yourself, chat to other farmers, and see what sprays they use, what corns, what fertiliser they are putting in seedbeds, and what they are top dressing. You nearly learn more by asking farmers, other contractors and good friends, who are farming and growing crops for a long-time.”

In 2014, Tom established Fitzpatrick Agri with the purchase of a John Deere 6630 and a John Deere baler. “We might have had three jobs the first year, and it went to seven or eight jobs the second year, and it just kept building and building.”

“The second year, we bought a mower, a wrapper and went down the line of baling and wrapping, which we still do today. The only difference is the baler, wrapper, and mower have been all changed.”

“I started mainly doing silage, straw, and hay. Then, I bought a plough and a one-pass [system], a sprayer, and a fertiliser spreader, as we got into the tillage end of things.”

Today, Tom has up to 25 customers based in the Offaly and Laois area and visits some clients up to five times annually to offer a wide range of agricultural contracting services.

“There is a lot of stuff around me. 80% of my work is a stone throw away from the yard, so it is not too bad. You do have a few where a half-an-hour would get you to them.”

“I can manage the spring work myself; it is more silage season. I do not have a regular person there, but I employ a few people if they were free on Saturday or in the middle of the week.”

“If I knew I was going to be busy on a Saturday and I needed someone to drive a rake or baler, I would give them plenty of notice. I try to do as much as I can myself to keep the costs down; you need help now and again.”

“Then, I went out and must have searched for eight or nine months and finally bought the John Deere 6630. Then, I said I would buy the second tractor. We kept it the same and bought the [John Deere] 6930.”

“They are a good tractor, I find, they are hardy, but if things go wrong, they can be expensive. If I can do it myself, I will do it, but if it needs computer software or if there is an engine problem or anything like that, I will bring it over to TFM [Templetuohy Farm Machinery Limited] in Portlaoise.”

“I would not have any knowledge of the software. The likes of ploughs or sprayers, I nearly look after them myself, to a reasonable extent.”

Machinery and evaluating their usage

“We are probably spraying 800 or 900-acres a year, between corn and grassland, [that includes 30-acres of corn I have myself].”

What it takes to succeed as an agricultural contractor

Tom outlined the essential ingredients he believes are needed to succeed in the agricultural contracting field.

“The key element of [agricultural] contracting is doing a good job, that you are back in the same person’s yard to do the same job again.”

“We can do a job for a person in the spring sowing 10-acres of corn, and we keep in touch with them throughout the year to see how the corn is coming on, the same with fertiliser. I like to keep an eye on crops I have sown to make sure they are establishing well. The main thing is that they come up.”

“If you keep doing a good job for the customers you have, there will be no bother that way, but when things start slipping, and you are doing a bad job, you will soon enough have no customers left, and you will be gone out of contracting. You will have a shed full of machinery and nowhere to go with it.”

Tom commented on the sheds and infrastructure Fitzpatrick Agri utilise to store large machinery and stated he acquired a loan to establish the company. “I have a shed on the uncle’s farm, five minutes down the road.”

“I do put the silage trailer in it over the winter, with the ring roller and old rake. Then, at the back of the house, we have a shed that will hold the majority of stuff.”

Furthermore, Tom commented on the fleet implementing TOPCON GPS technology to ensure accurate field measurements. “It is the greatest thing I have ever bought; it is shocking handy.”

“I can nearly manage the way I am going unless I gain big acreage sowing corn and spraying; maybe, then, I will buy autosteer. The GPS I have at the minute works 100%; I have no issues with it.”

Challenges in the sector

Furthermore, Tom commented on some challenges he faces including “not enough hours in the day to do work”, finance, and updating bookwork, which his mother completes.

Tom will continue to monitor Fitzpatrick Agri’s progress and hopes to expand his customer base, offer harvesting services, and update various pieces of tillage equipment.

- Advertisement -
Previous article
Have you considered switching to a multi-cut silage system?
Next article
How these beef farmers are achieving improved weight gains in cattle