That's FarmingThat\'s Farming Irelands Largest Farming News, Properties and Classifieds Network
HomeBeef'I’m thankful to have her as a boss and my sister' 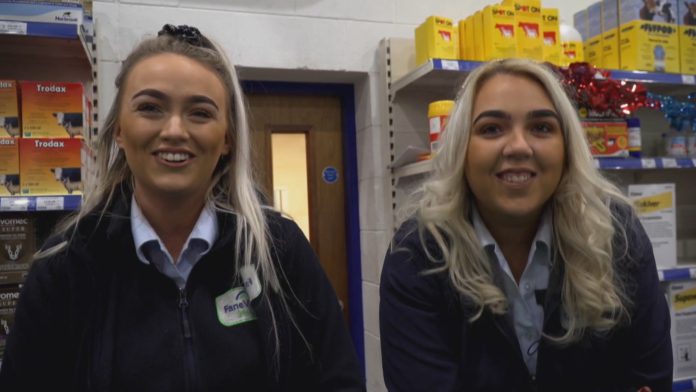 It’s November and that means the penultimate episode of this year’s Rare Breed – A Farming Year on UTV.

Tyrone’s Jack Smyth is showing two of his own animals, as well as helping other farmers at the Beef and Lamb Championships at the EIKON Exhibition Centre. “You do nothing for two hours and then everything has be done in 5 minutes! “Jack laughs, as he races round looking for black spray paint!

In Crossgar, Robbie Neill is just coming off a night shift at the fire station and before he even goes home, he calls in to feed his pigs housed at his grandfather’s old farm. They all tuck into their meal and raw vegetables, and Robbie explains the wisdom behind individual buckets for certain pigs!

Back in Newtownards, Valentine Hodges is in her kitchen working with the honey. She’s jarring up honey for sale at the various winter markets she will attend.

She pours very carefully commenting, “the bees worked very hard to make this,” and ensures that none goes to waste.  She explains the science behind why honey is so good at treating winter coughs and colds.

After jarring up 30 pots of lovely clear honey, Valentine sets to work using the beeswax to make hand lotions and moisturisers. She claims not to like cooking, but loves making up these recipes!

Mark McConnell is at his own farm outside Antrim this week, where vet, Cahir McAuley, is scanning his female llama herd for pregnancies.  Mark highlights how well-natured the llamas are and that they are very low maintenance when it comes to giving birth.

He also talks about selling single male llamas to sheep farmers as they are great at protecting a herd.  He says, “I’m looking forward to lambing and calving in February when the whole cycle starts again.”

In Tyrone, Eimear McGovern is in her farm shop in Omagh. It might be too early for some, but Santa is on her mind as the shop is open for a special evening toy sale. She talks about being a manager so young in the shop, but says she “can stand on my own two feet, and work with them the very best,” when talking about customers trying to get the better of her.

Her sister, Orlagh, also works part-time in the shop and both are enjoying the toy sale along with the other staff. Orla says, “I’m thankful to have her as a boss and my sister.”