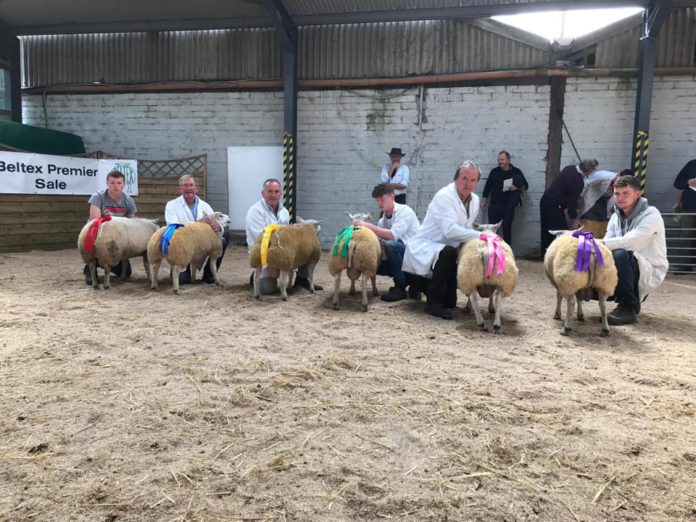 The sale topper at the Belgian Beltex Breeders’ premier sale was Fire Cracker, a ram lamb, exhibited by Stephanie and Hugh O’Connor, Cloneycavan, Ballivor, Co Meath, Cloneycavan, which sold for €1,200.

Buyers were also offered the option of online bidding, with a tightening in COVID restrictions meant there was no pre-sale show.

The O’Connors also received the second and third top prices on the day selling at €1,080 & €1,000 for their other two ram lambs from their pen.

Fifth was John and Dudley Maher’s January-born, Ballinakill Flanagan, from their flock at Ballinakill, Roscrea, Co Tipperary, which changed hands for €820.

The Roscrea-based breeder recorded the biggest individual flock sales of the day, selling 11 rams to new homes at an average price just shy of €500.

Parting ways at €800 was the embryo-bred Sheephaven Edwin from the Co. Donegal flock of Declan Robinson at Larganreagh, Downings, Letterkenny, who also received €680 for his shearling ram,  Sheephaven Eric.

“The overall trade maintained the recent strong demand for pedigree sheep, with a large attendance ringside supported by online bidding throughout the day with the strong demand reflected in the 70% clearance for the breed at an average of €562.”