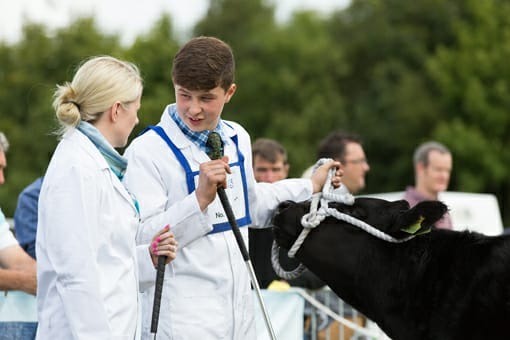 Conor Craig is from Co Longford, he divides his time between farming, playing rugby and studying Agricultural Science in UCD.

Conor always had an interest in farming from a very young age.,

“I started showing cattle when I was seven or eight years old by for other people around Longford and then throughout the country.”

The Granard native is a 3rd generation Angus farmer who started off showing his cattle when he exhibited two Angus calves at a show in Summer 2013.

The herd was established by his late Grandad which was originally a dairy and sheep herd that converted to a suckler herd breeding Angus, Limousin, Charolais, Belgian Blue and Hereford.

“Grandad got Parkinson’s disease about 20 years ago and he had to have a herd clearance sale of the pedigrees.” He told that’s farming.

“He used to rear calves and had some horses then and when I was about 13 years old, I use to go over to help him on the farm after school.”

Conor and his late grandfather John bought two in-calf Angus heifers, and they had a heifer and a bull reviving the Millbawn Angus prefix again.

“We showed Millbawn Katie and Millbawn Kurtis, we got first for Katie in Tullamore, Kurtis the bull calf came second that year.”

The pedigree herd is now run by Conor and his aunt Amanda Bogan.

On his home farm, his parents have mainly commercial sucklers, with breeds such as Limousin, Charolais and Belgian Blue cross and they also have a few pedigree Angus and Shorthorn.

“When it comes to choosing the genetics we would be trying to pick a bull that matches the cow and will breed as good an animal as you can get.”

Conor feels it is important that the animal has good figures and is going to be a saleable item at the end of the day.

“You would be matching up different animals with different bulls to try to get the best out of the animal.

“Good conformation and calving at ease to breed cows that will go back in calf.”

On the farm, they use artificial insemination and semen is used from Australia, Canada, Scotland etc.

“Irish, Canadian and Scottish are the three main sources”

“At the moment it is mostly spring calving but there are a few autumn calvers.”

It suits better for sales to have calving around January and February instead of March and April.

In the future, “we are hoping to have half spring and half autumn calving.”

On the farm, they also want to get as much out of the grass as they can and to avoid having the cows in the sheds too long.

“We are calving heifers down at two years old.”

Conor exhibits at agricultural shows and sales during the summer months.

“We have had very good success with the Angus in recent years.”

Three years ago, Conor had a heifer Millbawn Nancy, “She got junior overall champion at the show in Tullamore.”

“She then went back a year later as a junior cow and got reserve senior.”

Millbawn Aurora got the overall reserve Irish Aberdeen Angus All-Ireland in 2018 in Mohill.

He is happy with the current size of the herd. “In time we might expand but at the moment we are very happy.”

They are having success in getting the animals sold,” so far it is going very well.”

“In time we would be hoping to expand to bigger numbers in Angus or go into another breed as well.”