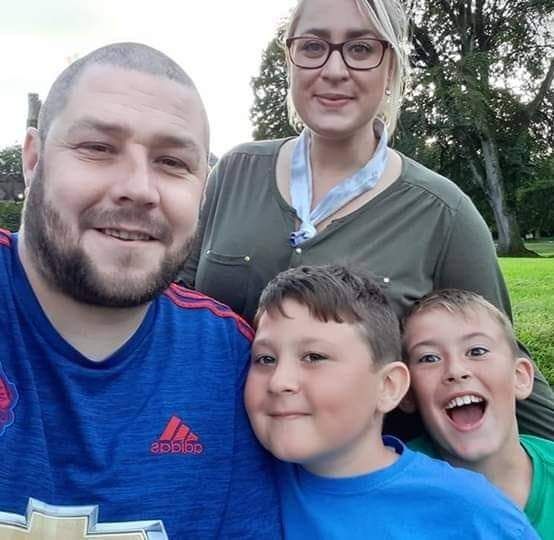 Childhood cancer: ‘He stopped eating, saying he felt something was stuck in his throat’

Cillian Condon, from Wexford, was diagnosed with T Cell Lymphoblastic Lymphoma in 2018 when he was just 7-years-old. In this article, his mother, Sinead Wood, opens up about their experience with childhood cancer.

He had lost weight, but we thought that was because he was more active and had been playing in the snow.

We blamed his cold on the snow too. A few weeks later, he stopped eating, saying he felt something was stuck in his throat and could not swallow. I also noticed he was not sleeping and was sitting up in bed every night.

Doctors said it was a chest infection, but he suddenly became very ill and was critical. He nearly passed out in the car on the way to the hospital and could not move, talk or walk.

The hospital thought it was pneumonia, and we still thought that when we were sent to Crumlin. He was admitted to the heart ward.

After lots of scans and tests, a doctor told us a mass pressed against Cillian’s heart and windpipe.

Being naive, I thought the ‘mass’ meant fluid from pneumonia. I had never felt as numb when the doctor said the mass was a tumour and that he had cancer – T cell lymphoblastic lymphoma.

He had to go to theatre to have a chest drain put in to drain the fluid off his lungs. Because his breathing was so bad, they could not put him asleep for the procedure. He could not lie down flat as the tumour was pressing against his heart and windpipe.

It was touch and go afterwards. His breathing and heart were so compromised. His team said it was up to Cillian if he was going to survive the trauma of having the chest drain put in with no anaesthetic.

I could not see through the tears; I could not breathe; it was all too much. I had stayed pretty strong up till this point, not thinking it was serious.

But Cillian began to defy the odds. In less than a week, a doctor came to us with a big smile on his face to tell us that the tumour had reduced by 50%! We were over the moon; everything was moving in the right direction.

When he moved down to St. John’s Ward, Cillian was the new boy on the ward.

It was the first time we had seen a child with cancer other than him, and he looked at me with fear in his eyes. Every family’s story is different, but we all shared the same pain – fear for our children’s lives.

We got to our room, and my teaching began. I had to learn all about his bloods – Neuts, HB, white cells, platelets. I also had to learn how to clean and flush his Hickman, how to bathe him properly.

We were not allowed house plants, to clean in the same room as Cillian, to be near building sites because of the dust, large crowds, spray deodorant, share food or drink, touch his vomit after being sick because his vomit is toxic after chemo. It is a lot to take in when your mind is already filled with so much.

When it was time for Cillian to get his Freddie, which gives access to veins for chemo and blood transfusions, he was well enough to lay down and be put to sleep.

He had spent the last month sitting up because he knew his body could not take the pressure of lying flat. I was so nervous, and so was Cillian. Even though they said everything was fine, it was so scary.

It was strange seeing a tube running under my child’s neck and sticking out of his chest.

I felt ashamed that I did not know all children with cancer have these freddies. I could not believe the first time I knew about what these kids go through was when it happened to my own child. It did not seem right. We all know what adults go through; why not our children?

Taking him home scared me the most. Cillian couldn’t walk; the steroids were so strong and affected him badly.

We had to help him into the car and up the steps of the house. We gave him his medicine before bed the first night home, and I could not figure out the dosage.

I panicked and broke down; But, I phoned the hospital and told them we need to go back. I cannot do this on my own.

I do not know what I am doing. Something so small, and I was panicking already. How will we do this for three and a half years?

With one month to go now until treatment ends and Cillian gets to ring the bell, my anxiety is worse than ever.

My life for 3.5 years has been about monitoring Cillian’s bloods, his temperature, keeping track of prescriptions and keeping on top of infections – constantly focusing on numbers. I do not know how to move on from that.

Cillian, on the other hand, is doing amazingly. He has just joined a hurling team and is fighting through the leg pain from his steroids, knowing that he only has five days left of them, and he will be just like everyone else.

Sinead will speak about her experience of the illness in a groundbreaking new podcast series.

Gold Ribbon Conversations Podcast, focusing on the lived experiences of people affected by childhood cancer, is being launched to coincide with the inaugural  CAYAS Childhood, Adolescent, Young Adult and Survivorship Conference in Ireland (September 11th).

Up to 400 children and young people are diagnosed with cancer in Ireland each year.

“Every family’s story is different, but we all shared the same pain – fear for our children’s lives,”

The CAYAS Conference takes place from 10 am to 4p m on Saturday, September 11th.

Register for free online. We will publish an article with further details this week.

- Advertisement -
Previous article
Farmer fined for transporting cow to factory that was unfit for the journey
Next article
Doga: Why is it the best fitness activity to keep you and your dog in shape?