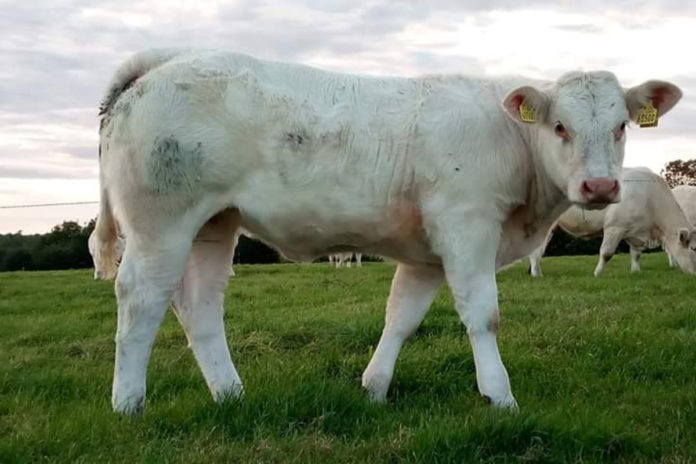 “Every cow in the herd dates back to that foundation female, which was a daughter of an old sire called Enfield Picador.”

The 18-year-old and his father, Thomas, are carrying on the tradition by breeding Charolais cattle under the ‘Carrowkeel’ prefix in Elphin, Co. Roscommon.

Their herd, which is a participant in the BDGP (Beef Data and Genomics Programme), now comprises of fifty suckler cows, which includes fifteen breeding females and mainly Charolais-cross-Limousin-types as part of a 50:50 split calving system.

The Gormelys also have a flock of up to eighty Belclare-cross ewes and Thomas also runs an agricultural contracting firm during the summer period.

“We strive to breed a golden-type weanling because they are obviously what is in demand. We aim to sell as many weanlings from €1,000 plus as possible.”

All males are sold as weanlings in Elphin Mart, while the majority of their heifers go under the hammer as weanlings, with the remainder retained and offered for sale as stores.

“Charolais cattle are the leaders in mart rings. The breed is dominant in Elphin Mart, if not every mart in the country.”

“Quality Charolais-cross weanlings are averaging €100-€150/head more than their competitors in the ring,” Cathal added.

Thomas, a certified DIY AI technician, inseminates 90% of the herd’s pedigree Charolais females to French, English and Irish sires, while a home-bred stockbull, Carrowkeel Jerome, dominates the pastures with the remaining females and the commercial cows.

“The aim is to breed the perfect animal, that is, an easy-calved, correct, long, well-structured-type with good muscular development, a high-growth rate and good conformation.”

“We like tall, long breeding females with good structure, a nice head, as close to perfect feet as possible, with proven maternal and fertility traits that can calf with ease and rear that calf.”

“We mix and match old and new bloodlines – we use proven sires and also experiment with new bulls that might help our herd reach new heights.” the 18-year-old added.

The father-and-son-duo aim to sell up to six high-end bulls for breeding purposes annually with a strict culling policy implemented.

These are sold privately from the farm and at society premier show and sales in Elphin and Tullamore to pedigree and commercial breeders.

A rigorous inspection process is a fundamental element of the society’s show and sales. All bulls are pre-selected, vet inspected, fertility tested, fertility insured, genotyped and export and myostatin-tested.

“Bulls have to be halter-trained for society sales, so, we break them in a couple of weeks before they go under the hammer.”

“We try to train as many as possible when they’re calves, but time doesn’t always allow for this.”

“They are also washed and groomed to ensure that they are presented in the best possible manner. I enjoy the thrill of getting up early in the morning to go to bull sales,” explained Cathal, a first-year agricultural science student at UCD.

“Coming up to the sales, it’s a case of clipping and combing them to ensure that they are ready to go under the hammer.”

[Carrowkeel Owen – for sale at Elphin Mart this Saturday]

Cathal, who is following in his father’s and late grandfather’s footsteps, made his debut on the show circuit over six years ago and now attends up to five agricultural shows annually.

Prestigious accolades that the family have scooped to date include the Midland and Western Charolais Club calf championship with their current stockbull, reserve calf champion with his half-brother, Jude and the All-Ireland baby calf championship in 2008 at Elphin Show.

“For me, shows are all about getting out there, meeting fellow breeders and having fun because, at the end of the day, it’s not all about winning, but it is nice to pick up a rosette for your effort.”

“I was over there for ten days and it is definitely the most enjoyable experience I have had with cattle.”

“Without a doubt, it has been my highlight with the youth development programme to date.” the third-generation Charolais cattle breeder added.

The Carrowkeel herd will continue to have a prominent presence in the Charolais cattle circles, with plans to maintain and improve quality, with a view to producing cattle to the highest possible standard.

The Gormelys will also turn their attention to achieving a 365-calving interval and improving their grazing infrastructure and handling facilities.

“I see a positive outlook for the suckler sector. The world population is growing and from my studies, I have learned that we need to produce more food.”

“Ireland, the home of the most naturally-reared beef on the planet, is the best country to produce food to meet this demand.”

Cathal believes that the Charolais breed has an important role to play in this. “Charolais has been the most dominant breed for the last forty years and it has made huge gains over the past number of years.”

“If we keep producing quality, then we will have no issues maintaining Charolais as the number-one beef breed in Ireland and Europe.”

“I have had a very enjoyable life to date as a Charolais breeder. Farming is a brilliant way of life and I hope I can carry on this long-standing tradition into the future.” Cathal concluded.