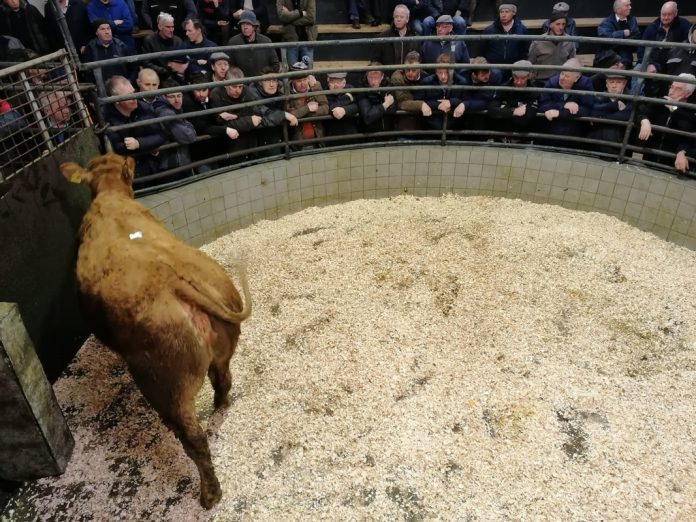 Are fatstock sales the way forward for Irish beef farmers?

The beef sector continues to be a turbulent market for Irish beef farmers as they see prices stagnate over recent months, but there is a new trend hitting the beef sector in the last while as fatstock sales become more popular?

In marts across the country, factory-fit cattle have become increasingly more visible as the beef farmer searches for an alternative market and by all accounts, these fatstock sales have given farmers some food for thought.

A year has passed since the large-scale beef protests swept around Ireland, which were headed by the Beef Plan Movement. A year on, prices remain low and there has been little sign of optimism for beef farmers.

So why have fatstock sales become an enticing prospect for beef farmers?

The obvious first point is the transparency involved in sending your cattle to the mart, when compared to sending cattle to the factories. The farmer can send their cattle into the ring knowing that they will receive the market price with no penalties or deductions tacked on by the processors.

By a farmer choosing to send their factory-fit cattle through the ring, they are cutting out the lack of transparency and allowing their cattle to be judged fairly.

Another crucial point that farmers will prefer is the ability to bring their cattle home if they are not happy with the price.

Once an animal is slaughtered, there isn’t any coming back. The farmer can also pick off the fittest cattle first, not being stuck in the position of having to send large numbers of stock at once, fit or not.

There has been a significant rise in demand from Northern buyers in Irish marts which has greatly improved the grounds for fatstock sales.

The rise in competition for forward-type cattle has resulted in an increase of price per head for heavier cattle not just in the marts but also in factories, with some plants quoting up to a 20-cent/kg increase in recent months.

Whether or not the demand for heavier cattle continues from the Northern buyers remains to be seen, but it seems set to continue in the short-term, and with the level of wet weather at the moment, farmers might be forced to move more summer fattening stock quicker than expected and many might choose the marts as an option.

There will be plenty of places to bring the factory-fit type cattle too, as there has been a rise in the number of fatstock sales around the country.

In recent weeks, marts like Tullamore and Kilkenny have held specific fatstock sales, while Elphin and Tralee have established strong sales for heavy stock.

So, are they a short-term fix or a long-term solution?

If we look at the UK, prime stock sales or fatstock sales are a big success, which could indicate that the trend could follow here, but the UK also has a greater number of small abattoirs who are the key players ringside.

The future of fatstock sales in Ireland depends on a number of factors but it will be inevitably decided by the farmer.

The IFA continues to tell farmers to shop around the factories for the best price and to hold out, but if the farmer can ultimately get a better return through the mart for his/her stock, then fatstock sales will continue to grow.