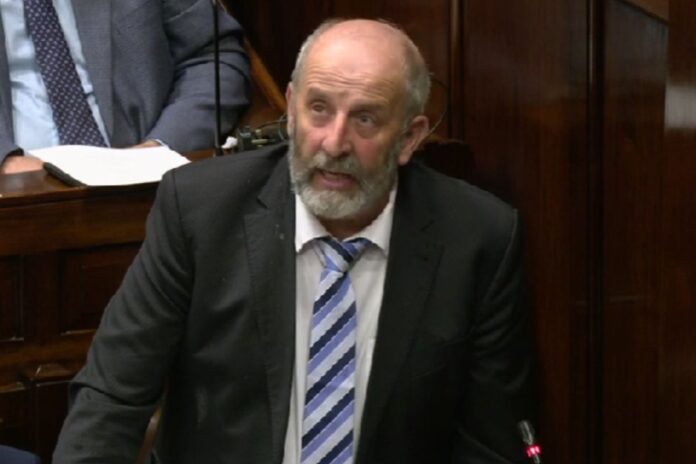 VIDEO: ‘The government has forgotten about farmers’

“There is hardly anything for farmers other than a grant for slurry tanks. Most farmers have already bought that kind of equipment. Farmers have built slatted tanks, which are as environmentally friendly as possible.”

Those were the words of Independent TD, Danny Healy-Rae, as he reacted furiously to yesterday’s Budget 2023 announcements.

During his address to the Dáil, he stressed that “the government has forgotten about farmers. It is doing nothing at all to help with the cost of fertiliser, diesel, electricity, or other materials, spare parts and repairs and is jeopardising food security”.

Reacting to this announcement, Healy-Rae said: “People on the road who are paying for petrol and diesel all year have been robbed to fund this budget.”

He said, “people looked up to the government and hoped it would do something for them, but it has done nothing”.

“They [motorists] have suffered. There is no answer in the world as to how green diesel went from 90c up to €1.50 in one jump – in one week. There has been no answer or explanation.”

“This is impacting farmers and people in industry. I have no problem telling the Ministers that a barrel of crude oil costs less today than it did four years ago. Look at the level of taxation. Is there any shame in the ministers at all?”

“It promised in June that excise would be reduced by 15c, with a 2c reduction on green diesel. The government left that in place until February 28th, 2023. Is it going to increase that again, then?”

The deputy then pointed to the government’s healthcare budgetary provision but warned that “it will not result in a proper health service”.

He told the Dáil: “If elderly people get sick now, they have to queue to get a GP. It is ridiculous. GP services have been extended to youngsters, but that will make the queues longer.”

“We are suffering immensely from the lack of a home help service. People are being allocated home help, but nobody turns up to give them any help. People are not coming.”

The deputy then turned his focus to electricity charges and vented his frustration that householders are facing price hikes at a time when energy companies’ profits continue to rise and have tripled in cases.

“They are hurting the people and driving them into the ground. I know of one old woman who is afraid to boil the kettle now because she got such a bill.”

“The government is profiting off the backs of these poor people because it is getting more VAT on it,” he concluded.

- Advertisement -
Previous article
‘ACRES will go up to 50,000 at full membership’
Next article
300th edition of ‘Ireland’s oldest and largest’ horse fair taking place this weekend