That's FarmingThat\'s Farming Irelands Largest Farming News, Properties and Classifieds Network
HomeBeef‘We would see a place for the suckling cow in Ireland; she... 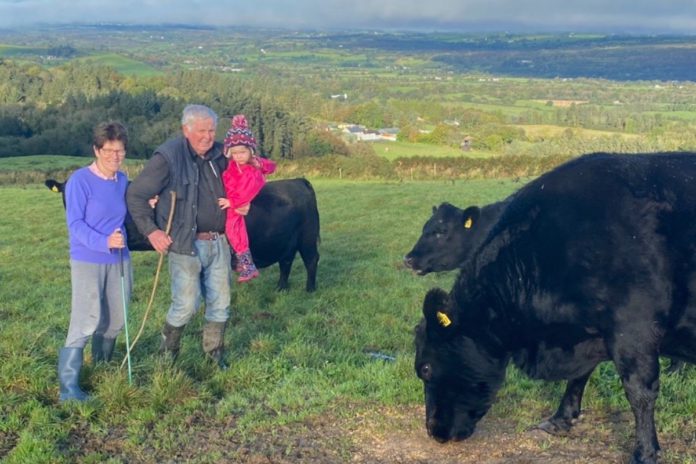 ‘We would see a place for the suckling cow in Ireland; she is still needed’

Michael grew up on a dairy farm and worked as an AI technician for twenty-five years with South Western Cattle Breeding.

“I remember milking cows in a stall in our younger days. So, we were always interested in farming,” Michael O’Riordan, a Pallaskenry Agricultural College graduate, told That’s Farming.

“In 1996, I was farming, and things got too busy. I went farming full-time with my wife, and we are pedigree breeding since. We had a pedigree herd before that point, but the herd has grown bigger.”

“We grew our herd from many of Con Hanlon’s females. Also, we picked up a few more heifers from our friend, John Vaughan, Ballybreen, Kilfenora, in Clare.”

“We bought his heifers and bulls from seven to eight-months-old around September when he has the Kilcarragh herd.”

“There is a big swing to Aberdeen Angus. We always thought a handy cow was the best cow when we had commercial females.”

The O’Riordan family owned Cooldaniel Charolais, which consisted of a range of CF51 daughters. In 2010, Michael decided to disperse his 10-cow Charolais herd to a Clare farmer.

The family began their herd with the acquisition of two Charolais cows from breeders in Clonakilty and Mallow.

“It was harder to sell Charolais bulls down the south, so we stuck with Aberdeen Angus. I think we made the right decision.”

“We loved Charolais cattle as they are beautiful. They are harder to calve than the Aberdeen Angus; there is no comparison.”

The current farm is 130-acres and comprises a 50-cow pedigree herd. Michael and his wife outlined why they chose Angus and the traits they look for in their females.

Their ideal breeding female is a “soft Angus with a nice small head”.

“Angus are good to calve, easy to keep and very fast to fatten. However, we find Aberdeen Angus are quiet.”

“There is not any badness in Angus because they are used to being handled and inside for wintertime.”

“The only time you have to be wary with an Angus cow is when she has just calved. She is very protective of her calf, but after a day or two, they are happy out.”

“We would not go for big Angus cows rather more traditional types of Angus cows as possible. The heaviest cow in the herd weighed 825kg this year, but she is an exception.”

“Many of our cows would be up to 700kgs which is big enough for any cow,” he added. 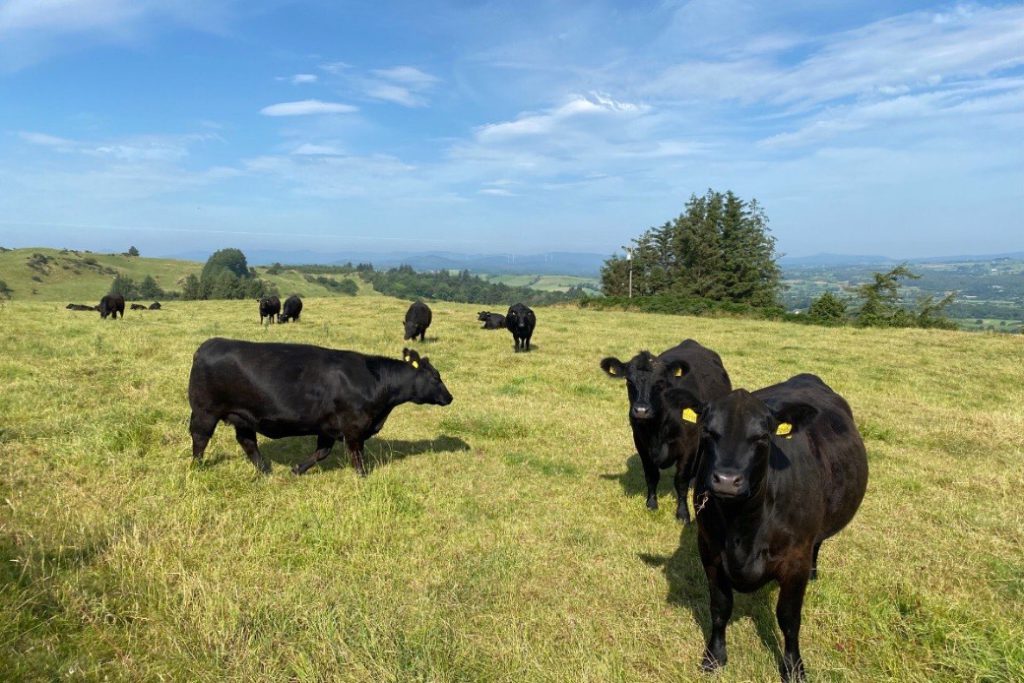 Michael, who is a DIY AI technician, deploys 1-2 rounds of conventional semen on 30 cows with another 20 served by his stock bull, Clooncolligan Robbie.

Their routine includes singling out females the day before they come into heat and AI’Ing her the following morning.

“We would use all AI, but it is easier to inseminate them when they are inside for the winter, whereas during the summer, it is more difficult to cop them.”

“We like to see different bulls and hate to have them off the one animal. It is nice to compare bulls and when you have them out to see which is the best.”

Some of these sires include Stouphill Bomber, Fergal, Calama, Kealkil Prime Lad, and ICBF trial bulls, which are all chosen for their ease of calving.

The family acquired their stock bull from Kevin Diffy, Leitrim, and has been on-farm for up to three seasons.

The bull serves spring-calving cows from the first week of April, with early calvers in a separate group.

“The bull would have 20 cows to serve every year. We let him run until August, and they would be all done by then. They would not be long enough after calving to be inseminated by AI.”

“Since we started pedigree breeding, we have never hardly slaughtered pedigree heifers unless it was a half-twin heifer.”

“There always seem to be a market there for the pedigree heifer just as well as the pedigree bull. Stars are important, and every farmer now in a suckling herd has to have five stars.” 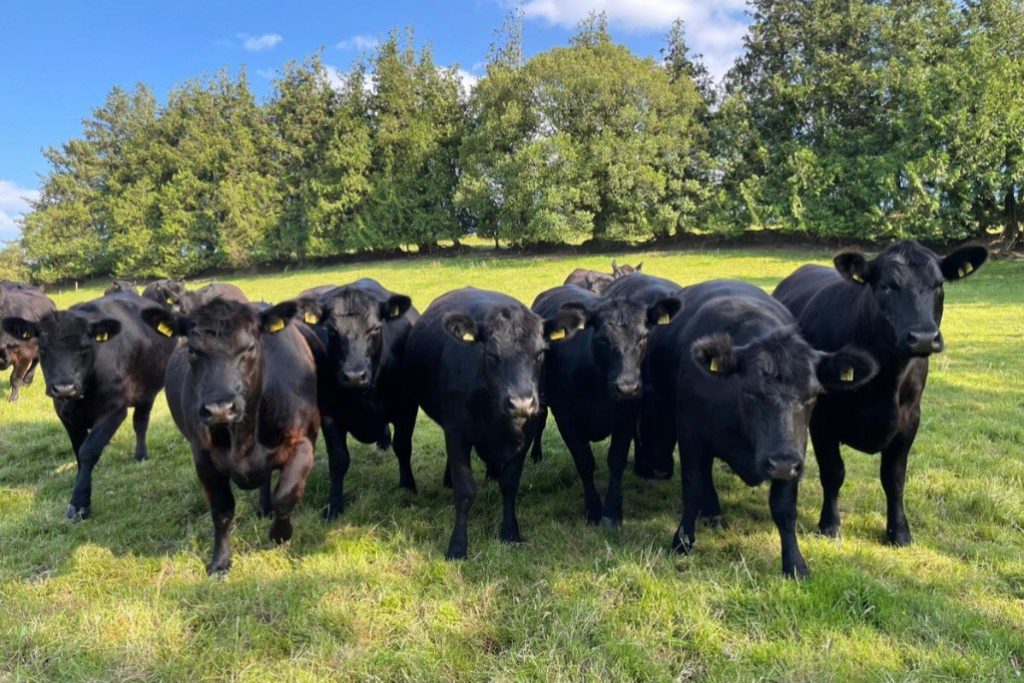 Calving commences on October 1st’ until March 16th’ on the farm with the herd’s calving interval sitting at 364 days.

They assess their cows morning and evening and have not installed calving cameras as they live close to the farm.

The husband and wife team calve approximately 30 cows between October and Christmas, with 20 from December to March.

“Many of my customers are dairy farmers, so they need a good strong bull to let off with their Friesian cows. When we started off, it was bulls for heifers, but now it is bulls for cows.”

“Irish Angus are top-level at the moment and, we would say it will continue because Angus are easy-calved and polled, which are two major selling points for dairy farmers.

“When we started out farming, we calved from December onwards, but it is handier now to have some calved before they go inside, as there are problems, (e.g. scour) with calving inside.”

The herd aims to compact calf as much as possible, culling any cow that goes past her calving date.

“A cow calving in April would not be much good to me; they are calving too late.”

“It would be alright if it was a heifer calf, but if it were a bull, we do not run it the following year. It is too long to be keeping a bull for the second year.”

“They are in pristine condition to calve at 24-26 months. If she calved later, she would put on too much weight, and you could have a problem then. They are fitter at that age.”

“They are nearly calving away on their own after their first calf at that age, and some of them can be even good and heavy but will still calve.” 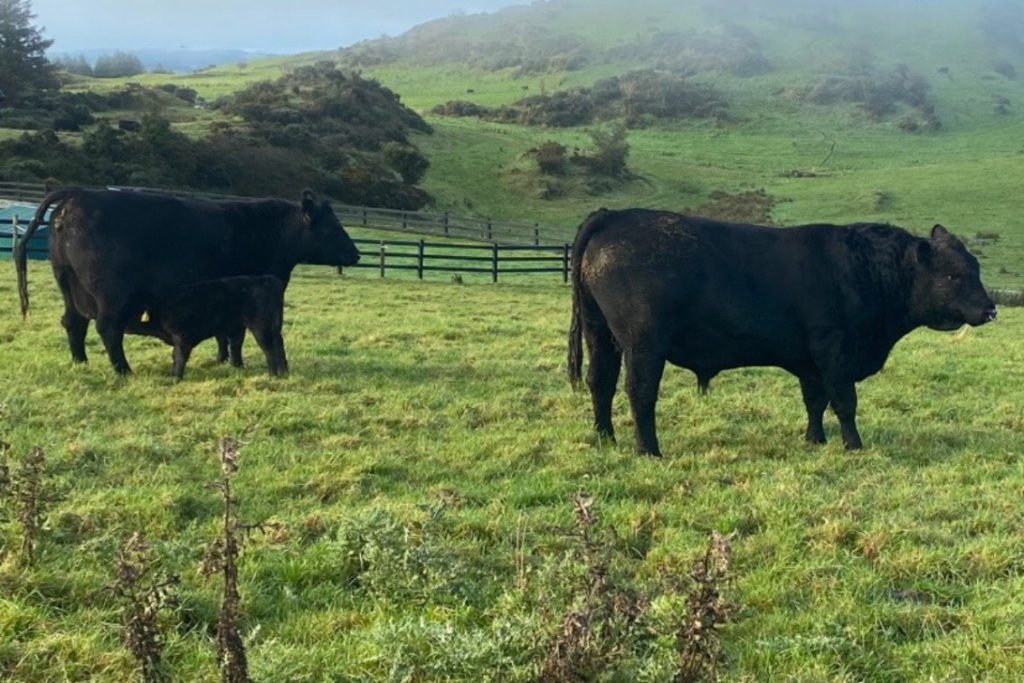 The pedigree Angus breeders retain up to 7 heifers as replacements and export 300kg heifer weanlings to Turkey. The family also has a history of sending progeny to Romania, Portugal, and Spain.

The suckler farmers send up to 6 cows per year to the factory, and aim for an R grade carcass, achieving approximately €1,400.

They cull cows with less milk or falling behind their expected calving date.

“We sell up to 20 bulls at 16-17 months for breeding, with the bulk going to dairy farmers. They are great customers.

“You have many of them coming back, so, it is nice to see them returning.”

“They are getting a fair price for the Aberdeen Angus calf. It is a pity not more Aberdeen Angus is not being used in the suckler herd as there would be a lot more suckler cows, especially, for people working as they would be calved when they come home and are no problem.”

“We have not sold a bull at the mart in the past year and sold most of them at home the year before. It is much easier with no haltering, washing, or anything.”

“There is a big day of work with the society sales. It might get you more money, but you have a bit more work to do.”

Although the husband and wife duo did not attend any society sales in recent years, they experienced success previously.

“We got 1st, 2nd, and 3rd places at agricultural shows: we used to go to Bandon, Bantry and Clonakilty.” 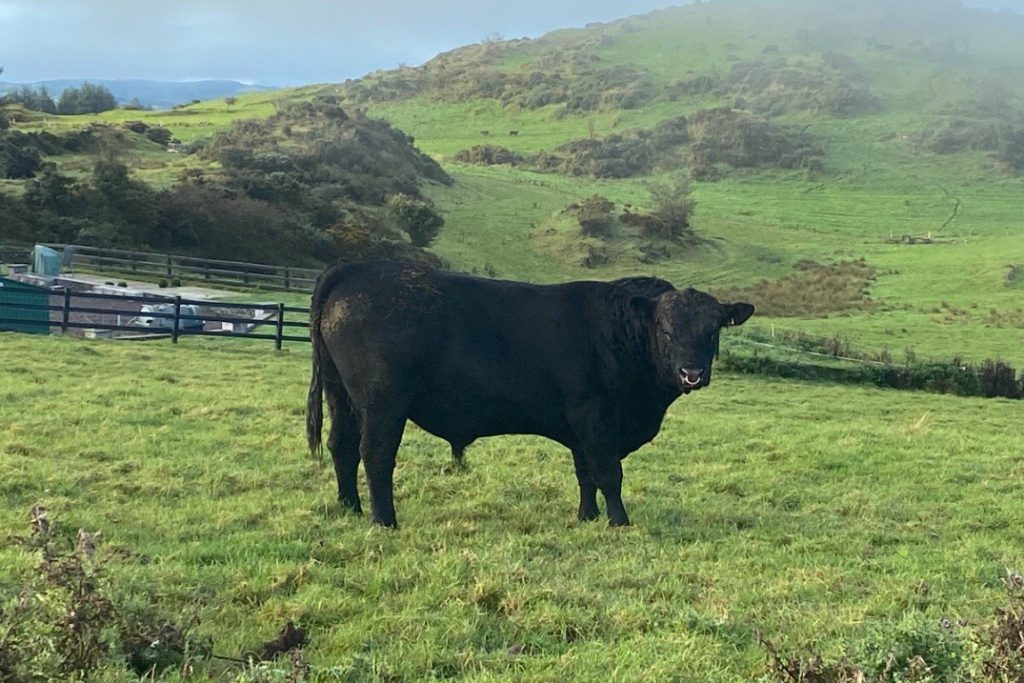 Michael outlined his view on the future of Irish suckler farming.

“The suckler farmer will have to stay because if you are buying beef, there is a big difference between the suckler cow and the dairy cow.”

“For the main product, you will have a better kill-out with a beef animal. Jersey was the ruination of the dairy herd; they should never have been pushed. But, even for the dairy farmer, if they have a dry cow, they are getting a good price too and a fair price for the calf.”

“Someone is getting caught with Jersey-cross calves buying them, and when they are at home, they see after 12-months they are no good; that is the problem.”

The pedigree Angus breeders shared their view on the proposed suckler cow cap as part of the Suckler Carbon Efficiency Programme.

“The number of suckler cows at the minute would be small. You have a large volume of part-time farmers, and the suckler cow is handy for many people because they do not have to go and buy anything.”

“They are used to the farm; the land is a bit rougher that suckler cows are on, and it might not be as good as the land the dairy farmer has.”

“We think it is a pity about the proposed capping of the suckler herd as it is already down too much.”

“Many suckler farmers have part-time jobs, and they are not as badly off as long as they are grazing the land, making a few pounds and happy.”

“We would see a place for the suckler cow in Ireland; she is still needed,” the O’Riordans concluded.