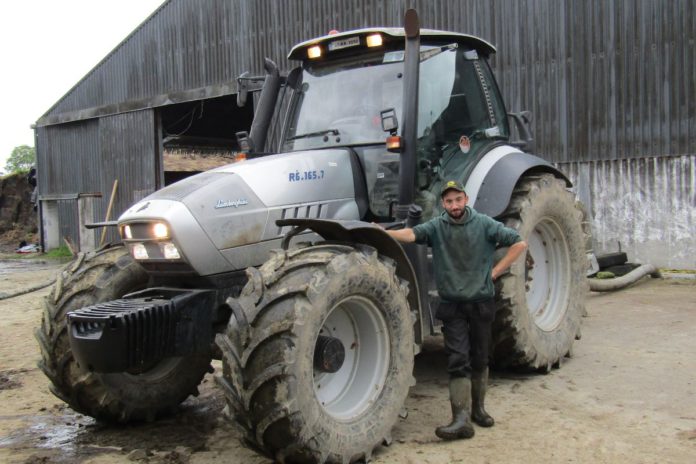 “My name is Patrick Lawry, and I am the farm manager here at Parknageragh Cattle Farm. The farm is about 2km outside Castleisland, Co. Kerry. Mike McAuliffe and his son, Shane, own the enterprise.

The farm is run by myself and Joe O’Connor with his son JJ. Joe has worked for the McAuliffes for over 30 years and ran this particular farm for the last 25+ years.

Mike purchased Parknageragh House and the surrounding farm in the late 90s and has kept cattle here since.

In addition to the suckler farm, Mike also has four piggeries where they produce around 50,000 pigs a year. In addition, he also runs a haulage company with his daughter Orla.

The McAuliffes have always had cows in some shape or form, leaving dairy cows for sucklers in the 1990s. Shane is now the third generation of the family to go into farming.

My primary responsibilities include calving cows, feeding stock, getting stock ready for the factory, choosing replacements, managing grass, and all the day-to-day running of a 300 head cattle farm.

I joined the farm in August 2020 after working on dairy farms and Farm Relief Services in Cork, Wexford, and my home county of Kilkenny.

On the farm, we have around 40 purebred Salers cows, approximately 50 purebred Aubrac cows and in the region of 20 Charolais cows.

We also have around 20 cross-bred cows, mainly Charolais-cross females, making up around 130 calving cows.

The home farm itself is around 200-acres. We also graze the cows in the land around the piggeries, and there is also some rented ground making up a total of approximately an additional 250-acres.

Salers first came on to the land here in Parknageragh in 1996, with the first cows coming in directly from France.

They were chosen due to their general ease of calving and ability to cope with harsh weather, which we are no stranger to here in the south-west.

Aubracs were brought here in 1998, again coming in from France. Aubracs are great cattle to finish, easy calving, make good mothers and are beautifully shaped animals. We are members of both the Saler Society of Ireland and the Irish Aubrac Cattle Society. 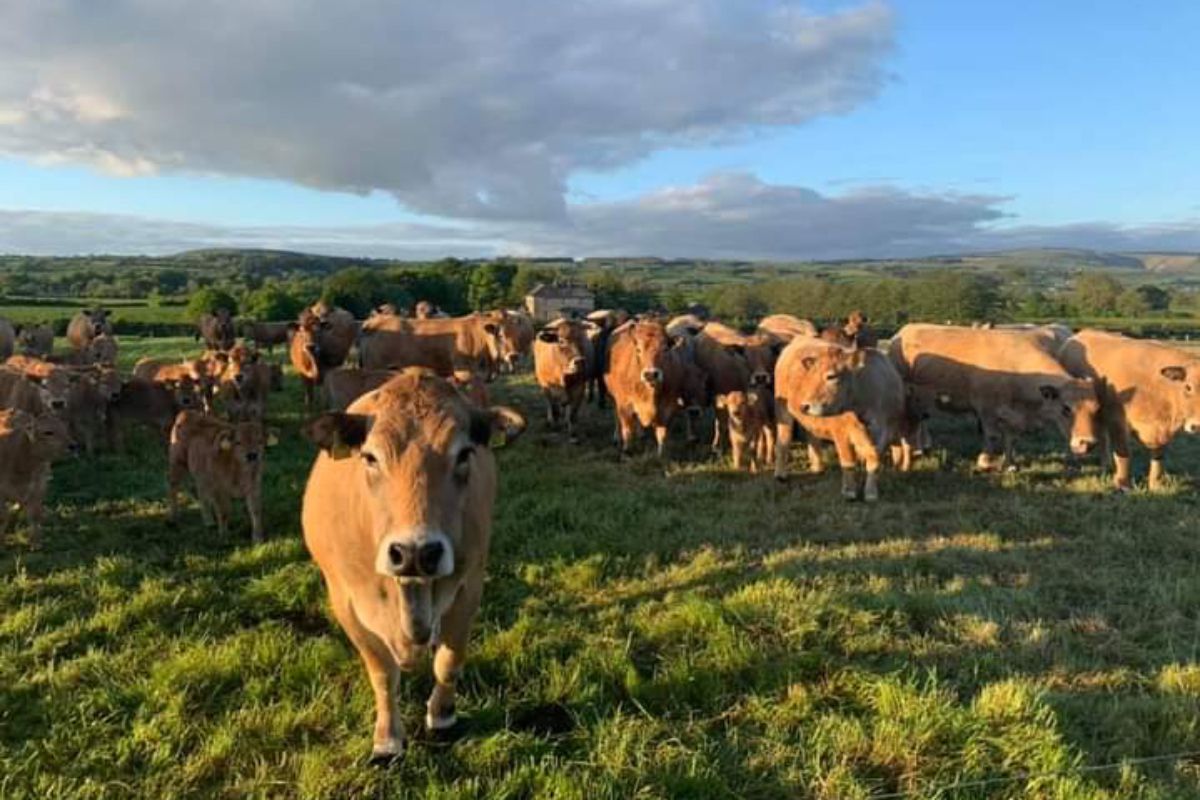 We run four stock bulls: usually, two Aubracs, a Saler and a Charolais. To note, we purchased two new Aubrac bulls for the breeding season ahead. We bought these in Ireland coming from fantastic bloodlines, with our latest purchase being a Heureux (French sire) son.

Our outgoing Aubrac bull, named Four Candles, is a French bull. He has sired numerous fantastic calves and proved to be a fantastic sire.

Our current Saler bull, Powerstown Niall, is going into his last breeding season here now, and despite his phenomenal size, he is a quiet bull who has thrown fantastic calves over the last number of years.

Our Charolais bull, Gullane Orson, is now in his second breeding season and has thrown exceptional calves after his first year. We also AI a small number of cows, usually keeping like breed with like, using straws from Munster Bovine.

We aim to calve down 30% of the herd in September and the rest from mid-March to the middle of May. This allows us to house the first-born calves when they are strong and hardy.

Our spring calves then will be born close to grass. Getting them out to grass early means they are less susceptible to viral pneumonia and other airborne respiratory diseases.

Aiming for a 10-week calving period

We have recently tagged some of our Aubrac cows with Sensehub ear tags to help with heat detection. While they do not make much difference to our cows running with bulls, they allow us to accurately AI the cows we want, inseminating on the most suitable day.

Other advantages from the tags allow us to monitor rumination, eating and daily activity. The alert feature also notifies us when an animal is in distress in the field, in the shed or during calving.

Over the next three years, we are working towards calving all our cows down between mid-March and late May. Aiming for a 10-week calving period will make life easier when vaccinating, dosing, and weaning calves.

After weaning, we keep all calves for some time. Then, we pick the best bred and most suitable heifers to keep and rear as replacements, aiming to calve down for the first time and a little under three years. 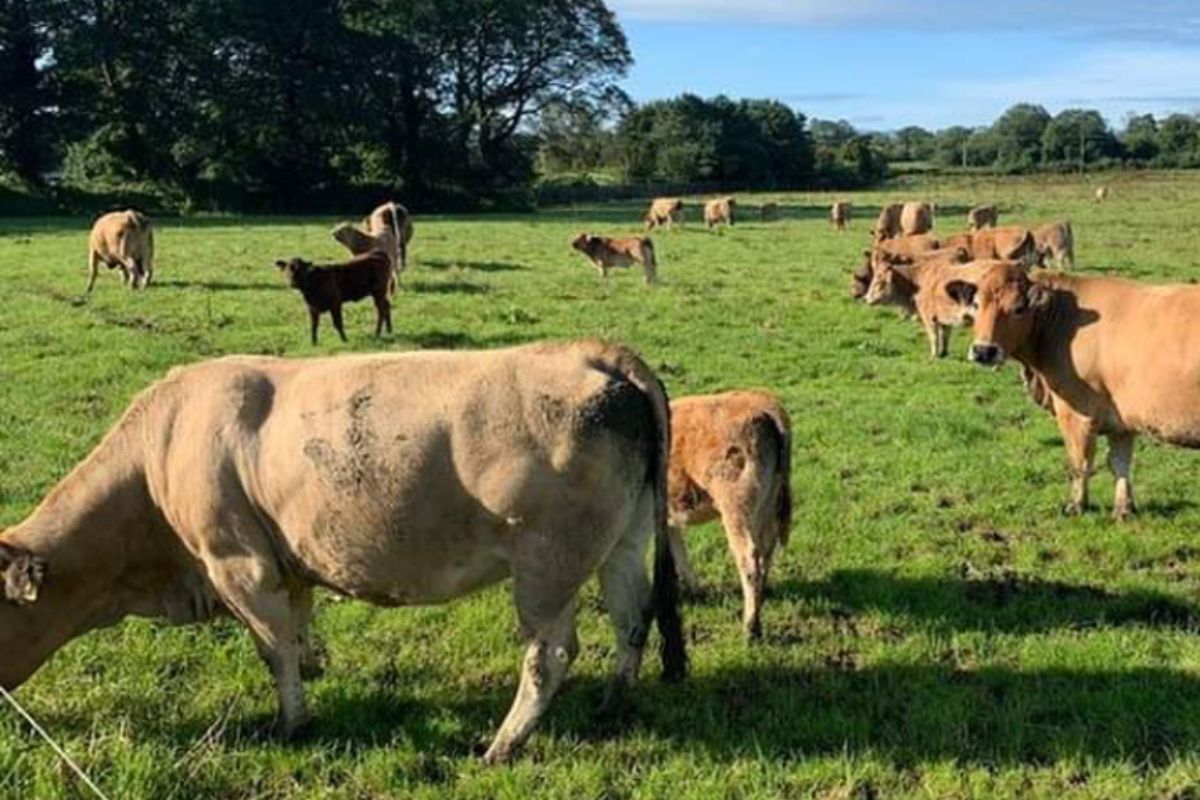 As our average age in the herd is relatively young, it allows us to make sure that the replacements we choose are developing in the most desirable way and get to a good size before the stress of calving down for the first time. This means that we keep only the very best stock on the farm and keep our standards high.

We would sell purebred registered heifers as breeding stock, selling young heifers from about 10-12 months onwards. We slaughter any heifers we do not keep or sell at approximately 26 months.

On the other hand, we sell pedigree bulls as stock bulls from 12 months onwards. We castrate the smallest of our cross-bred bulls before we fatten and sell these between 16 and 24 months.

We cull cows when they stop being productive. If we have a cow not rearing her calf as well this year as she did in the previous year or cows not in-calf after running with a bull or being artificially inseminated, they are fattened and sold.

In general, our average age in the herd is around 5.5 years, so keeping our average age young means our herd is primarily always made up of cows at their productive peak. 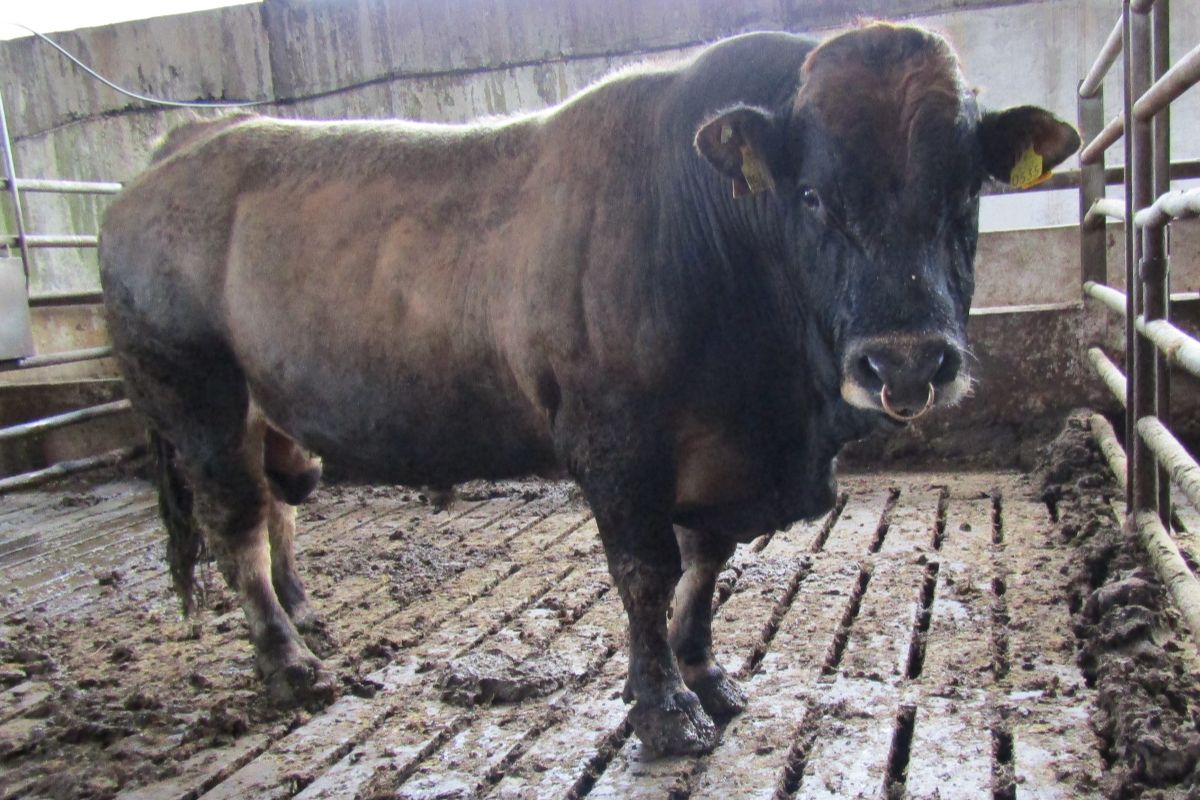 Grassland management is key to any farming enterprise. While we do not go big into grass measuring or anything like that, we do strip graze all our ground where the Salers and Aubracs graze, allowing us to control the rate at which they get through the grazing platform and minimising the amount of grass being trampled or flattened.

Due to the fact that we spread no artificial fertiliser, thanks to the never-ending supply of pig slurry from 4 piggeries, we like to ensure that fields arefully cleaned before we go in spreading slurry after grazing. 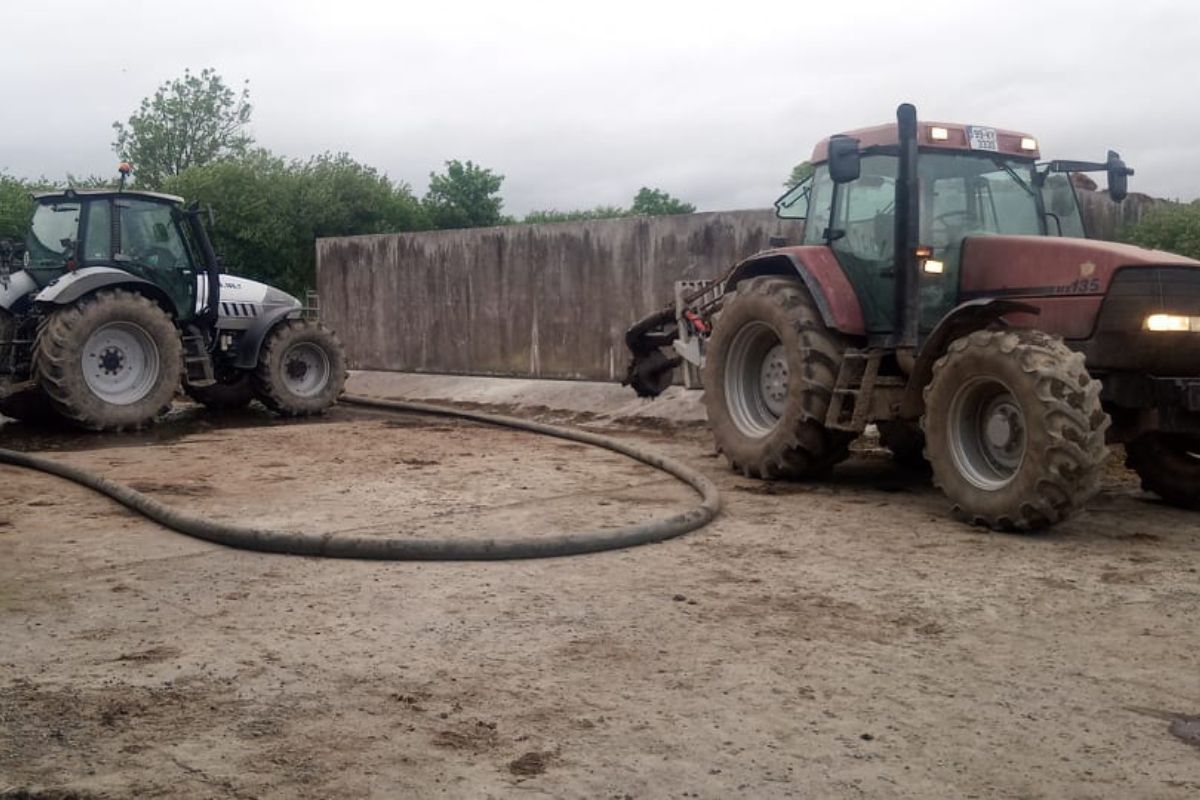 Time management, clear planning and patience are key to running a suckler herd. During calving season, especially if you dehorn your own calves, you have to pick a day to dehorn every week and stick to it.

With the amount of stock we have and the spread, they are over, managing the time you spend checking them and feeding ration is the most important thing to perfect.

Patience will be key because no matter how good your cows are, your breeding is, or your farm is, you will always have a calf that will not suck that you will have to sit with for hours.

Our silage is a joint effort between ourselves and the local contractors. We mow ourselves and also put up the silage ourselves. A combination of wagons and a harvester pick up silage.

We are currently reasonably satisfied with our herd. However, like every farm in the country, we want to squeeze that extra little bit out of our stock.

Tightening the calving period is our main aim for this coming year. In 5 years, I can visualise this farm having some of the best Aubracs in the country.

Our breeding is all very strong, and the conditioning of our cattle is second to none. With a few little bits of fine-tuning here and there and a few more trials and errors, I can see this being a world-class herd.

Our current plan at Parknageragh Cattle Farm is to introduce Culard Charolais semen to our Salers to breed strong stock ideal for fattening. 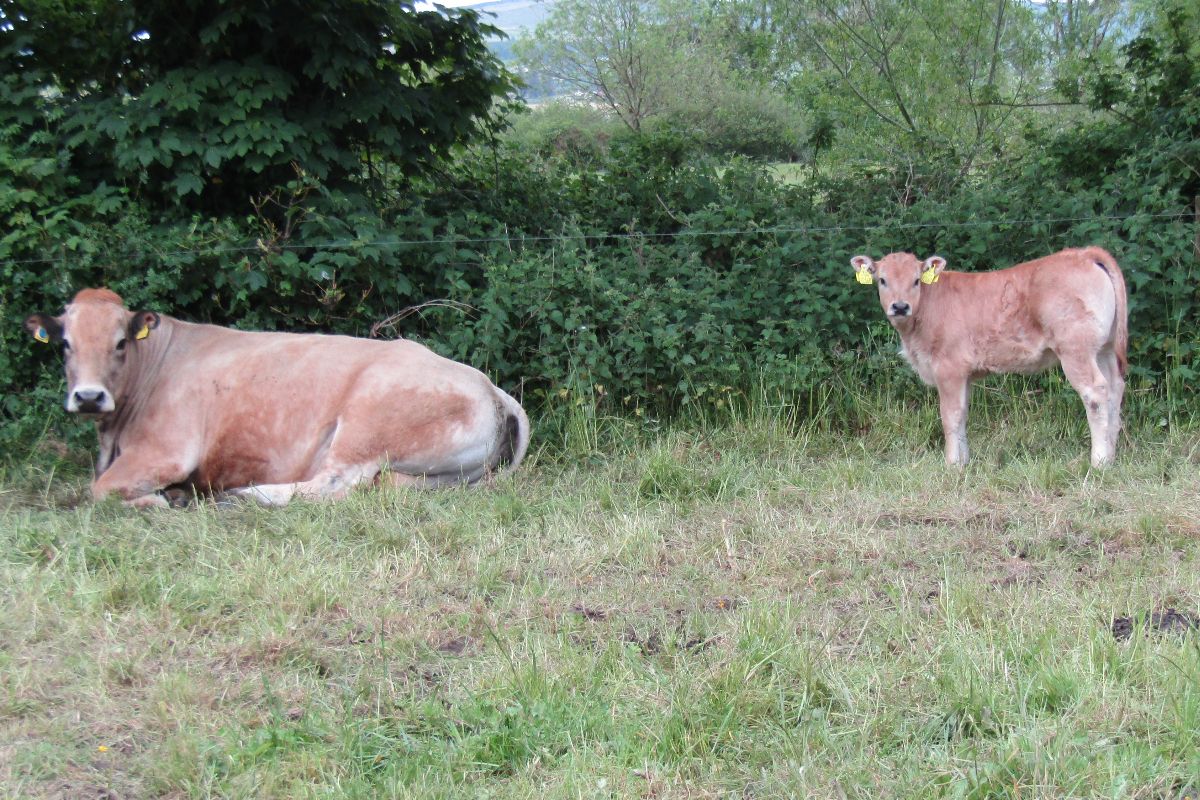 The future of suckling in Ireland

In my own opinion, Irish suckler farming is in a very difficult place at the moment, as is the entire beef sector.

We have no guarantee of prices, and the work that goes into feeding and raising an animal for two years just to have the animal go for slaughter and lose money makes it very hard to motivate yourself even to stay farming.

With small beef farms around the country disappearing, now is the time for a united front and support from the relevant associations and departments of government to try and get a fair price for our produce.

Irish beef is world-renowned for being excellent quality, but I do not think the beef sector will recover until that reputation is represented in payment to the producers. 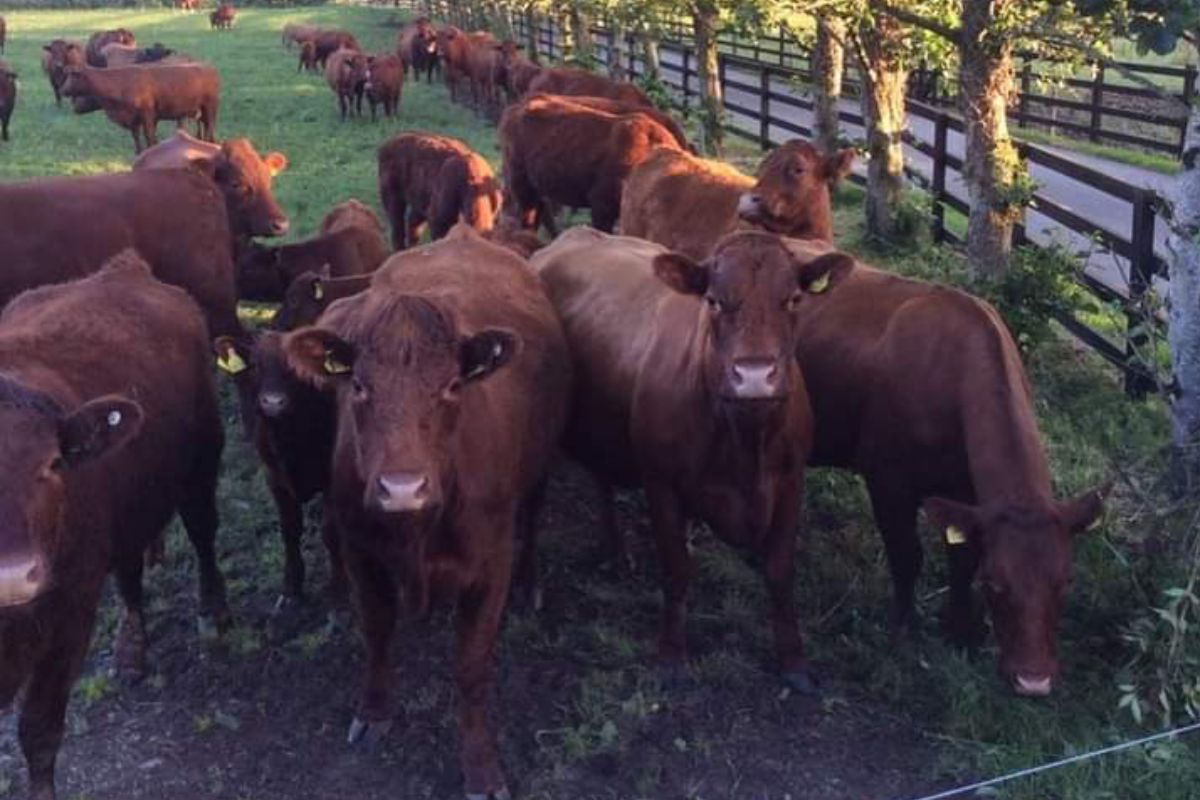 My journey thus far has been a great one. I love every second I spend on the farm.

It has been a steep learning curve at times. However, it has been an experience I would not change for the world.

I hope to be happy here for a long time to come. Also, I want to take this opportunity to thank Mike and Shane McAuliffe for the opportunity to run a farm such as this and for their trust in me to do this job to the best of my ability.

I would also like to thank Joe O’Connor for his time and patience and for making the transition from him to me very easy on both of us.”