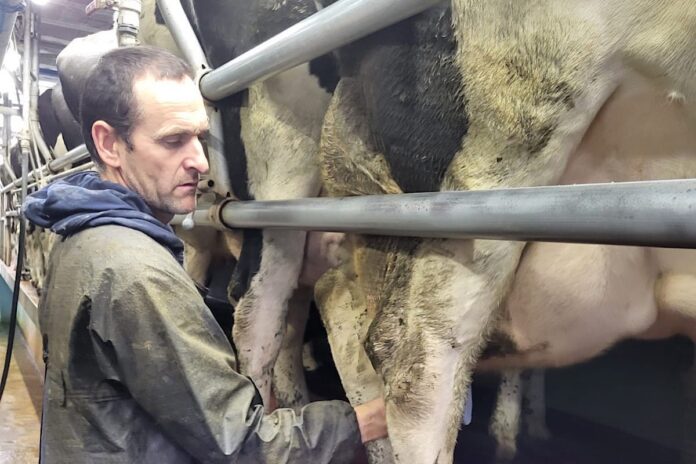 Two of the “best” decisions 46-year-old Meath man Joe Healy ever made were exiting dairy farming in 2007 and re-entering in 2020.

After getting out of cows, Joe continued to work in his brother Mick’s metal fabrication business and also established a suckler herd with his parents.

Mick died in a workplace accident in April 2018, and this event, Joe said, had a “huge” influence on the decision to re-enter dairying.

He worked in the steel fabrication business for nearly 20 years, but the “grá” for the industry was gone, and he no longer wanted to pursue it as a career.

Before this, they farmed an 80-cow suckler herd, finishing all bull progeny under 16 months, selling heifers as weanlings, and buying in an additional 30 bulls to finish under 16 months, over the summer when sheds were empty.

But he bit the bullet and invested in 10 Friesian in-calf heifers and 60 maiden heifers from five herds in Meath, from which four heifer calves were born in year one of the venture.

His ideal Holstein Friesian cow is “pleasing to the eye, has a good udder, feet, and legs, has a calf annually, preferably in the same month each year”, and can produce 8,000-9,000 litres as a mature cow.

“Looking back from when we got out of dairying, fertility levels have increased in the breed,” Joe, a 1993 Warrenstown Agricultural College graduate who did three months in Holland on a 70-cow dairy farm, told That’s Farming.

“I could not believe how easy cows went in calf for us; on the other hand, the gene pool is narrow in some areas. I believe that if farmers are not careful, there could be a problem with inbreeding down the road.”

Joe received a Lakeland Dairies CellCheck 500 award with an SCC of 70 in his first year of dairying.

Moreover, according to reports, the herd’s EBI for January-August 2022 stood at €151.

“I am happy if we can have a herd maintaining around 8,500 litres. But I would like to see butterfat and protein figures higher. We are heading for 3.5 protein and 4.1 butterfat. I will be able to select my bulls and hopefully push that in the right direction.”

According to Joe, last year, he fed around 1,600 kg of concentrates per cow, with this year’s quantity being closer to 1,800kg. 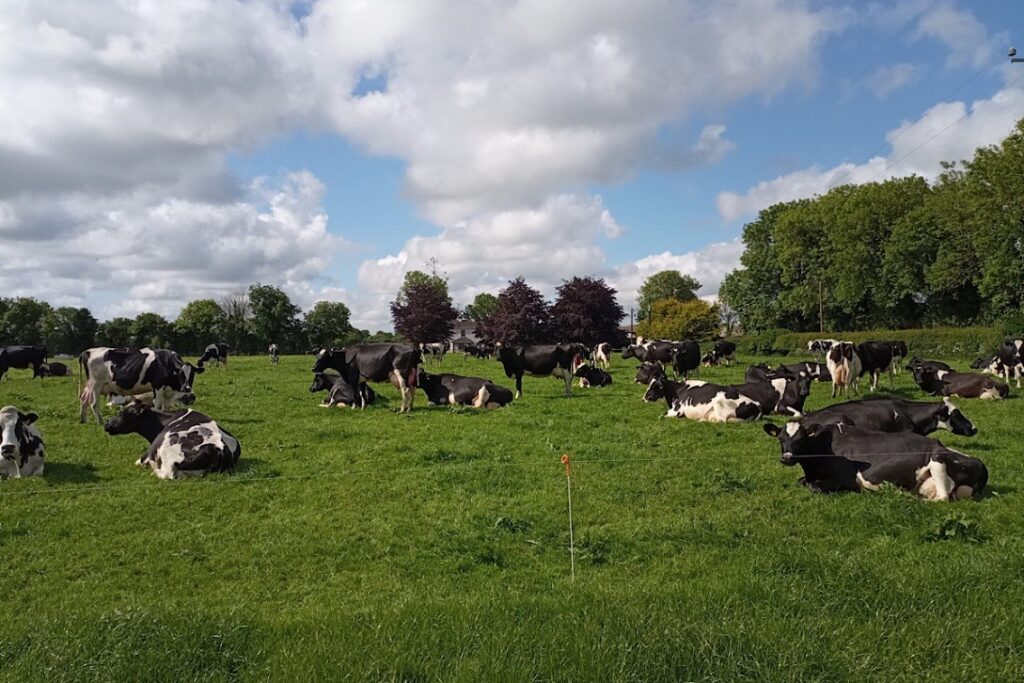 His cousin, a farm manager, David Healy, and relief milker, Robert Corroon, assists him when he needs time away from the farm.

In addition, his father, John, and mother, Rose, play an active role in the farm’s running.

The Meath dairy farmer uses 40% sexed semen and utilises conventional semen (with the aim of 100% next year) on the reminder and fixed-time AI on heifers.

He uses fresh semen on heifers which repeat to first service sexed semen. As a DIY AI technician, he AIs all cows, while another AI technician AIs heifers.

He selects sires based on a “good” classification behind their dams and good yields, fat, and protein.

Joe mops up with an Angus stock bull, serving up to 8 cows this year. The 2023 plan is to utilise ScratchE heat detectors or natural AI and introduce the stock bull as he inseminates them.

“We got better conception rates with sexed semen with cows than heifers; whether that was to do with fixed time AI, I do not know.”

“If you pick a lot of Irish bulls, the gene pool is narrow, but I would be inclined to go more international bulls. I pick an odd Irish bull, but I am choosey enough.”

He plans to buy around 50 straws of sexed semen next spring, aiming for 50% conception rates at 20 heifer calves and selecting Belgian Blue, Hereford, and Angus beef sires after this.

He plans to have health collars on cows next year.

Joe will calf 104 cows next year, 44 starting January 13th, and is planning to have 84/104 cows calved before March, following on from 82 cow calvings last spring.

He opts to calf heifers at two-year-old and registers all pedigree calves.

The Meath dairy farmer has a strict culling policy, with this year being the first of three years to remove cows from the herd due to SCC and lameness; he sold these at Carnaross Mart.

He aims to retain all heifers annually, selling beef calves at 42-days-old, and Friesian bull calves at 14-21-days-old to a Meath-based calf-to-beef enterprise.

Joe manages his grassland management by putting cows in 21 paddocks and removing strong paddocks for silage to feed cows during tighter months.

The Meath farmer explained that the BETTER Farm Beef Programme provided him with knowledge of grassland management during his time as a suckler farmer.

Joe aims for 21 kgs of DMD intake per cow through grass, meal, and silage, feeding a maximum of 4kgs at a time.

“To be honest, it has regulations, and if you do not stick within them, you will be in trouble, so you have to make sure you follow them.”

“I feel there are rules in the derogation that should apply to everyone.” 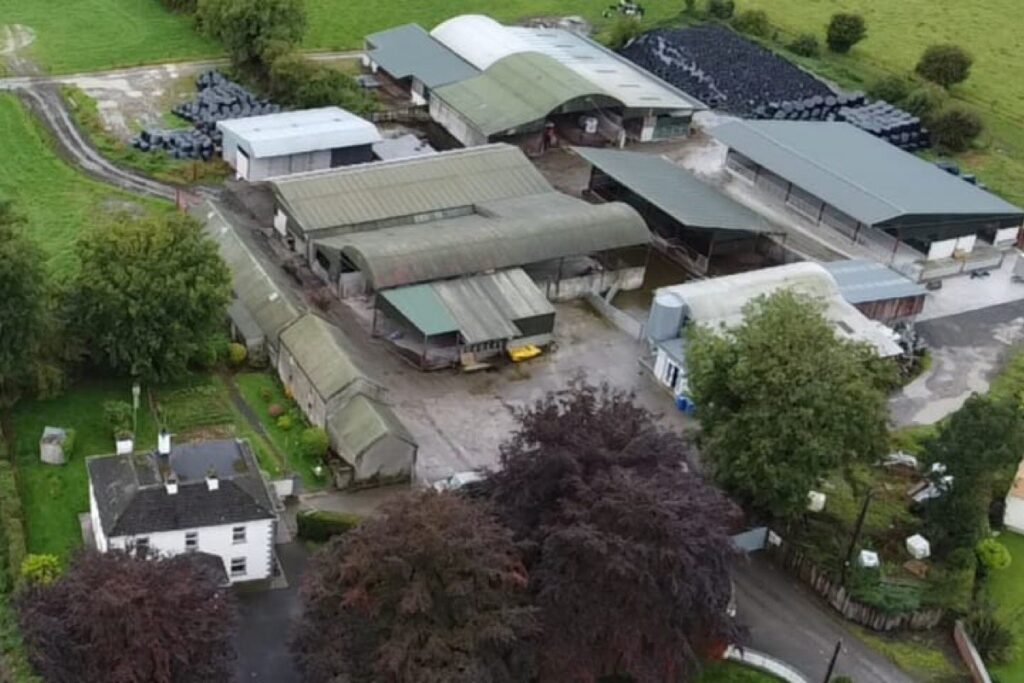 He milks in a 14-unit Dairymaster milking parlour (with a drafting unit, automatic cluster removers, and automatic washers) and earlier before exiting dairying in a 6-unit Fullwood parlour, converting this building to a meal shed.

Upon re-entering dairying, he installed a bigger parlour to facilitate growing cow numbers to 80 or 100 and allocate family time with his three small children,.

He now undertakes milkings in less than an hour in the morning and in an even shorter time frame in the evening.

“I feel it is hugely important if everyone else can finish their work at 6pm in the evening after a journey; there is no reason a farmer should not either.”

The farm infrastructure includes 112 cow cubicles and 32 heifer cubicles, a slatted shed with rubber mats for youngstock and sheds for calving and calves.

On the farm, he implements technology using the Dairymaster AutoID system and the Agrinet HerdApp and will install a JFC Evolution automatic calf feeder in the coming months.

He feels the sector’s challenges are manageable and said you have “to keep your eye on everything and stay within rules”.

“It is hard for me to complain about challenges when milk price is where it is. However, it would be challenging if milk prices were down at 40c/L with current input costs.”

With input costs spiralling, he is exploring solar panels to cut his electricity bills and “strongly” thinking of foliar urea to cut fertiliser usage.

The Meath farmer said, “there is no question” Ireland is producing milk and dairy products as “environmentally friendly as possible” and used the similarity of the quantity of grass we feed compared to other countries.

“We had cows grazing on January 12th, and after that, we missed 12 days when we did not have cows out for a few hours, which is a long grazing year.”

“If you look at America, Canada and lots of places in Europe, cows are in full-time. Even costs with the burning of diesel, hauling food in and slurry out, I think the future has to be positive for the Irish dairy industry,” the dairy farmer concluded.

- Advertisement -
Previous article
‘My aim is to be at 500 ewes’ – Styles on starting enterprise from scratch
Next article
Bullocks to €2,400 and dry cows to €2,200 at Dowra

Pics: 6 of the highest-priced females at McGee’s sale as heifers...