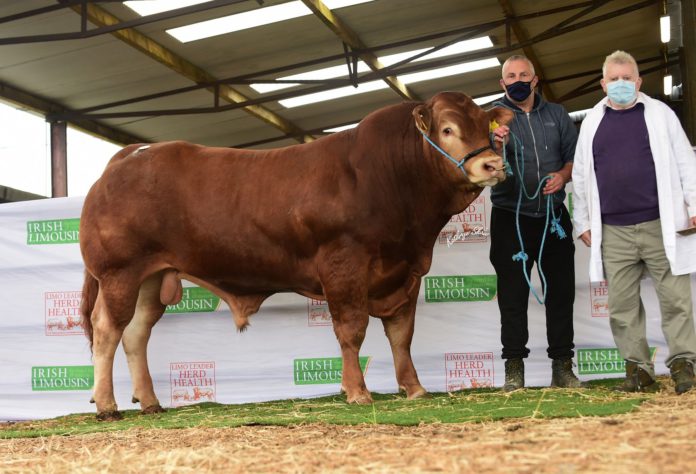 Following the sale, Irish Limousin CEO Ronan Murphy commented: “On behalf of the ILCS, we would like to wish all purchasers the very best with their new acquisitions from our sale here in Roscommon.”

“As has been the trend this year, home sales for Limousin bulls continue to be very strong, resulting in reduced numbers presented at sales compared to those catalogued, while average sale prices continue to be upon 2019 reflecting the strong demand for the Limousin breed.”

“Special thanks to Maura and all the team at Roscommon mart, our stewards, Michael, Philip and Ann), our auctioneer, George and the council and staff at the ILCS for coordinating the sale.”

“I would also like to acknowledge the additional efforts made by all purchasers and vendors who adapted to the Covid-19 restrictions and protocols throughout the spring sales season.”

“Despite these challenges, support for the Irish Limousin continues to be extremely strong, and we look forward to our next society sale in October,” he added.

An eye-catcher in the viewing pens, Septemeber-2019-born Panacea came to the sales ring with multiple five-star ratings, including a replacement index of €123 and terminal index of €159.

The 17-month-old Bavardage son, BUCKFIELD PUDGE, found a new home for €3,800. Pudge’s dam is the UK-born Annadale Icandy, a daughter of Haltcliffe Dancer.

Pudge, bred by John Moore, Westport, Mayo, has five-star ratings in many traits, including a replacement index of €119 and terminal value of €159. 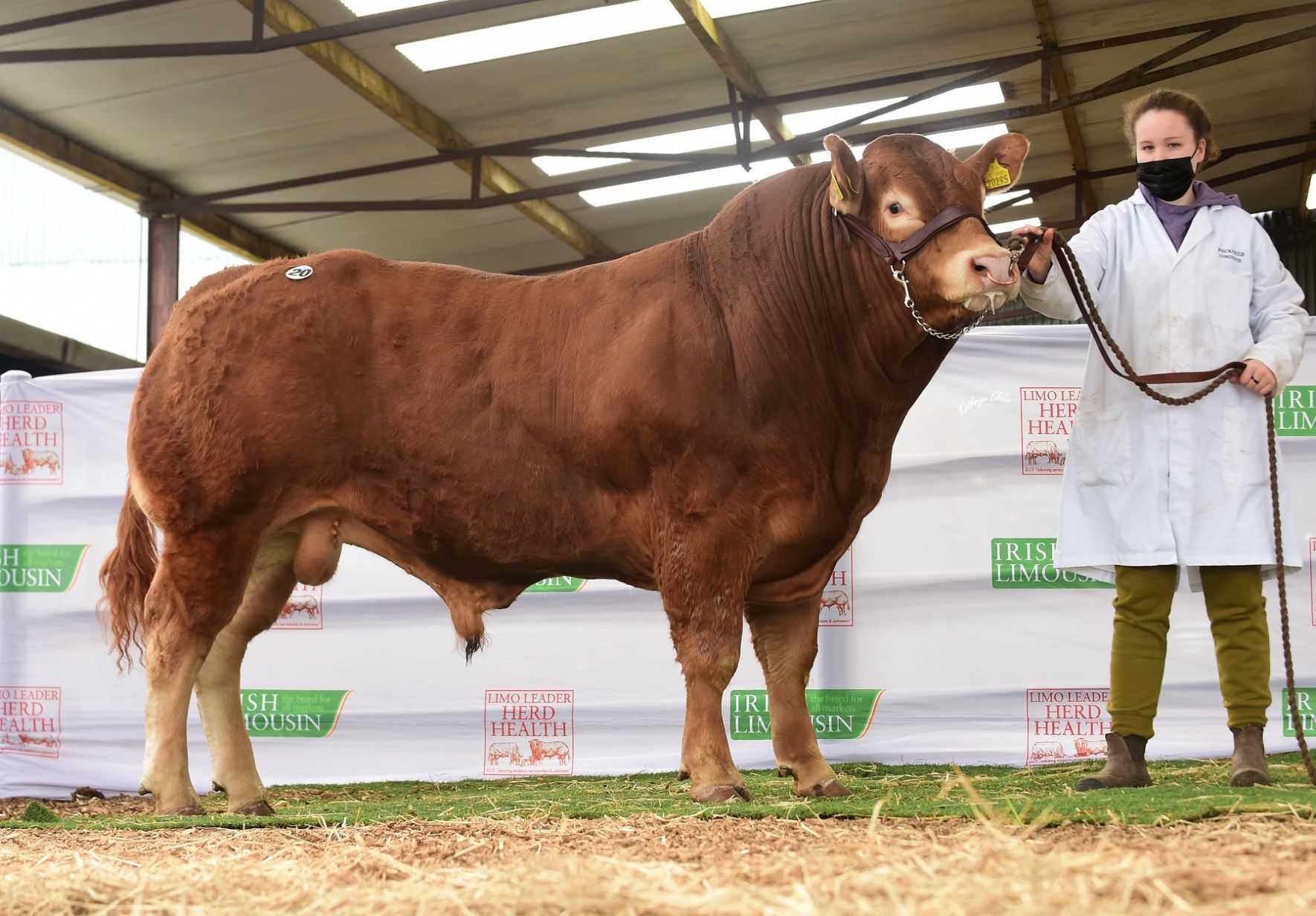 Heading to pastures new at €3,600 was 14-month-old FLASKAGH RUNO. This young bull is a son on Ampertaine Missouri and Flaskagh Jean, an Ampertaine Commander daughter. 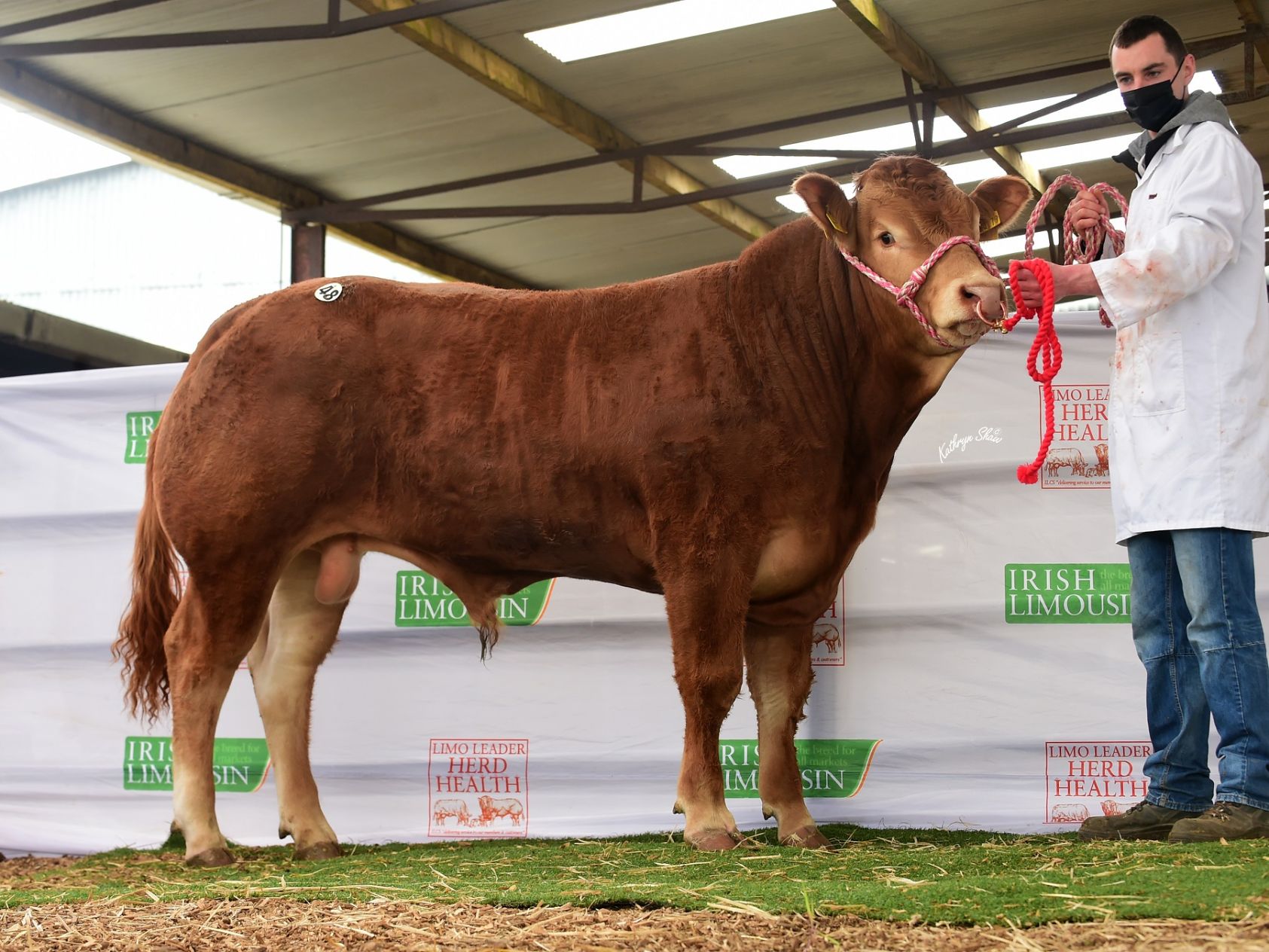 Next up at €3,400 was 18-month-old multi-starred KELTIC POLO, a son of OKH – Keltic Handsome and Keltic Ilinos (a Tomschoice Ironstone daughter). 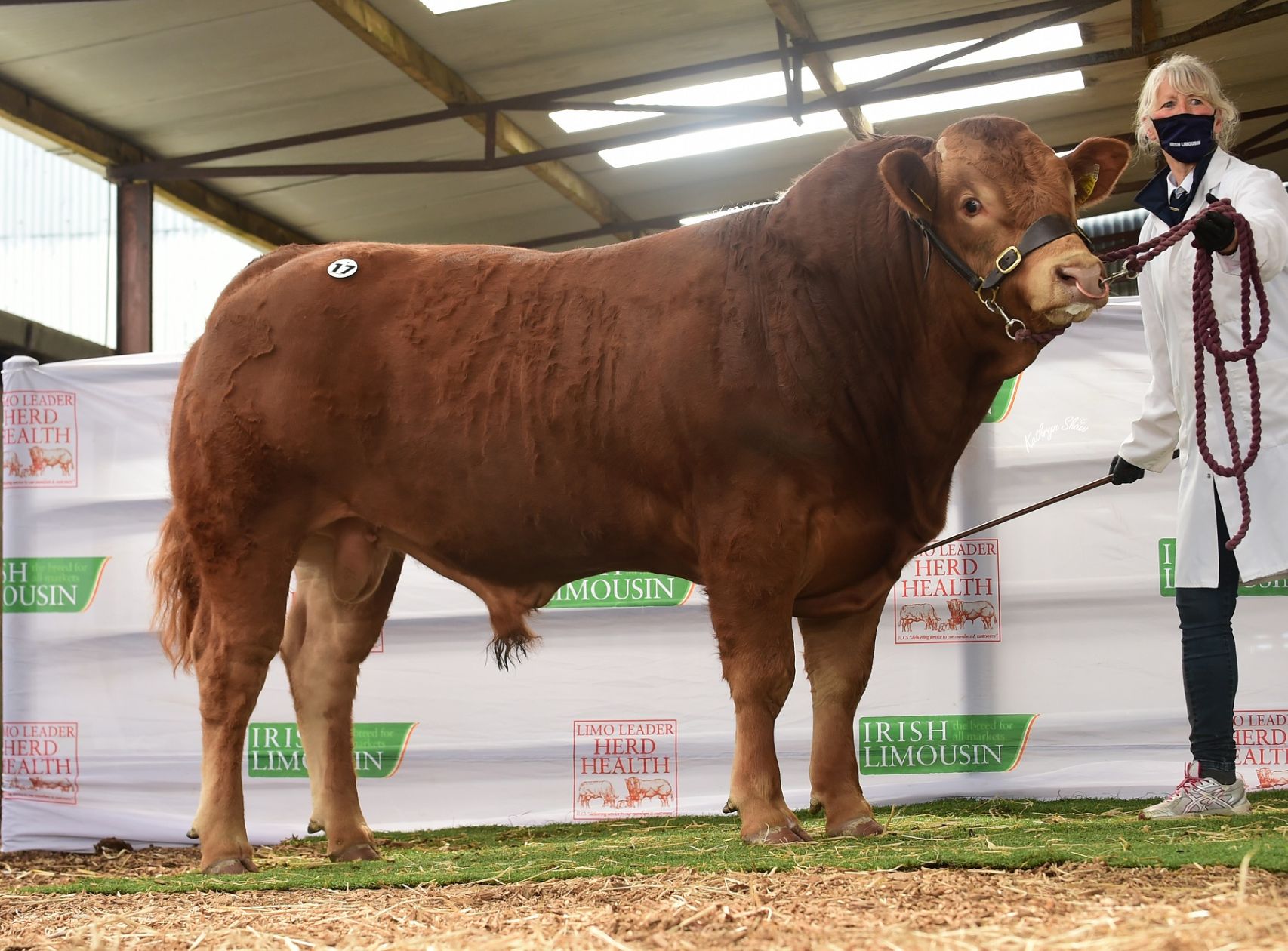 BOYANAGH ROCKY, a fifteen-month-old son of EBY – Elderberry Galahad was one of two bulls sold for €3,400.

The Tarpey family from Elphin bred Rocky; his dam, Boyanagh Kerrie, is a daughter of Castleview Gringo. 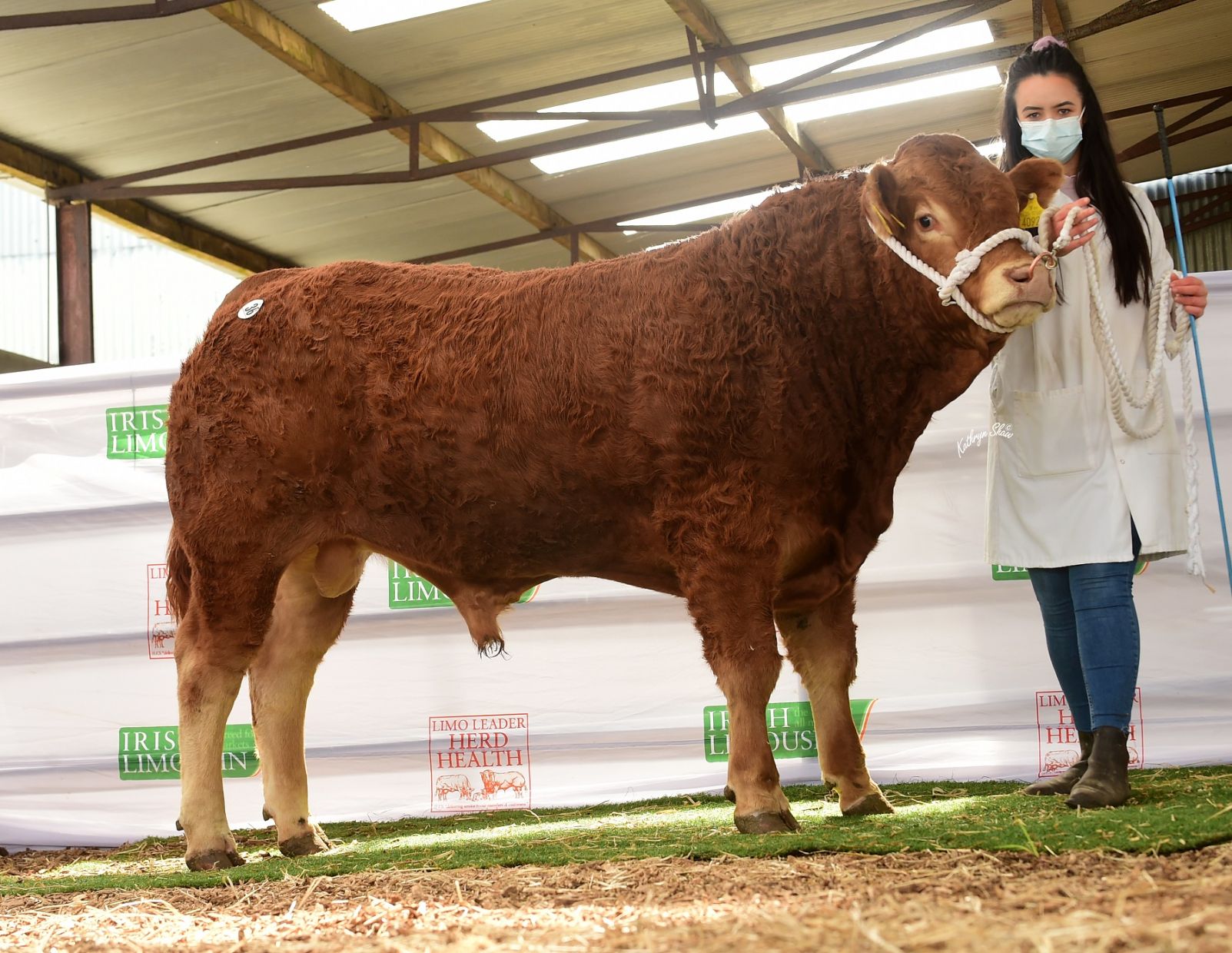 At the same price tag was BEAGHMORE ROY -454, the youngest bull on offer. Roy has Lodge Hamlet, Sympa and Joueur in his lineage.

Born in April-2020 and bred by Michael Reilly, Leitrim, he has an array of five-star ratings. 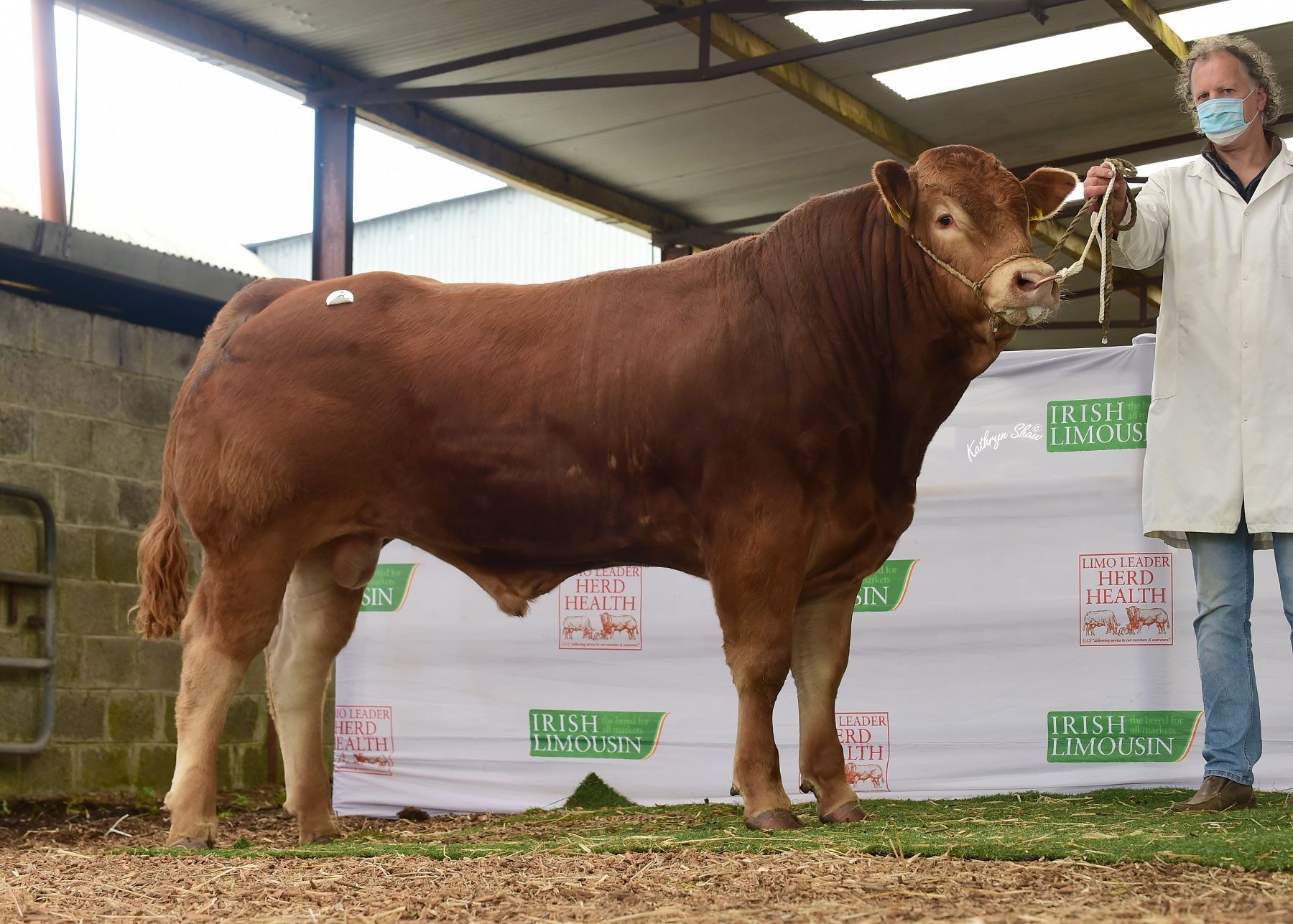 Born in August 2019, Pedro’s dam Ammaghmore Ivy has Wilodge Cerberus and Omer-Mn in her sire stack.

The Kennedy brothers, Gearoid and Padraic, presented July-2019-born, COOLRAIN PA 298, at the sale.

Pa is a son of stock sire, Drummin Goliath and grandson of previous stock sire, Moloskey C Hawk (both of whom were acquired at society sales). 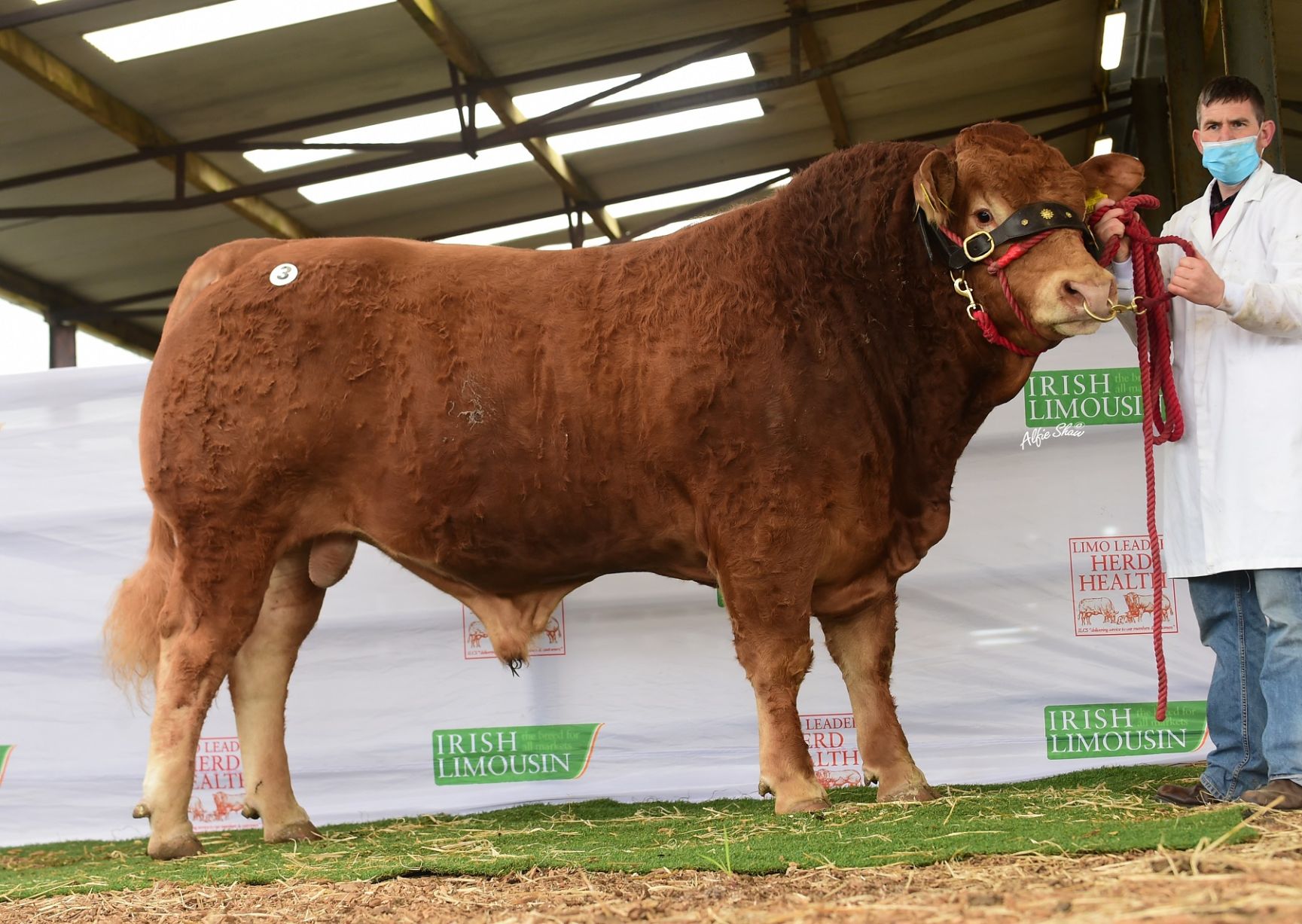 Ricardo is a son of ZGM – Gamin and Milan Lilymay (a Wilodge Tonka daughter). He has five-star ratings in many traits, including replacement, carcass conformation and daughter calving interval. 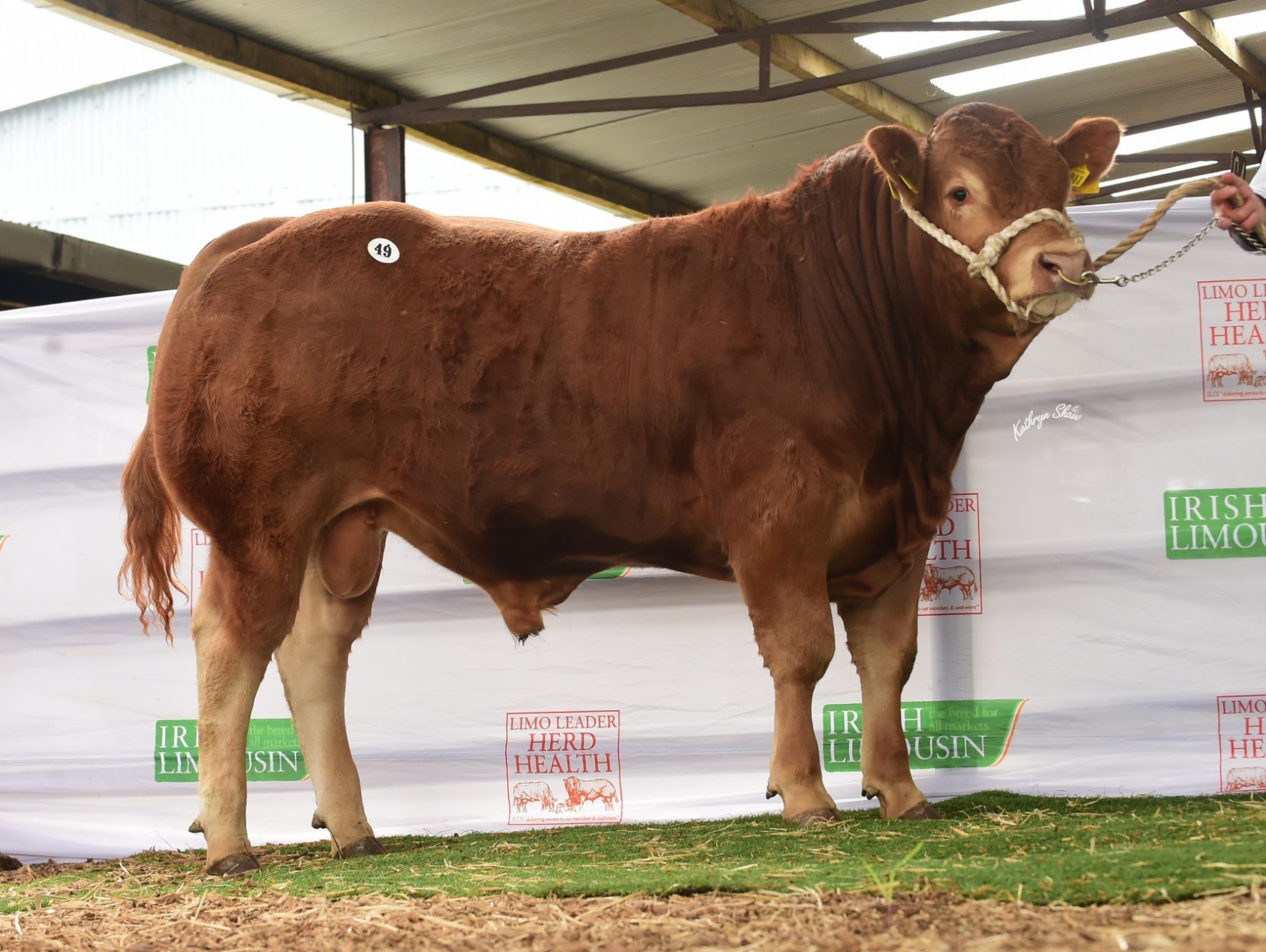 Pablo has Wilodge Drummer and Broomfield Regentcey in his back pedigree.

Romance has a five-star replacement index of €117 and a four-star terminal index of €130.

His home-bred dam, Creenagh Issy, has Procters Cavalier and Hortensia in her back pedigree.

Michael McKeown, Castlebar, Co. Mayo presented two bulls in Roscommon Mart, both of whom sold for €2,800. First up was CURRANE PADDINGTON, a November-2019-born son of Cloughhead Umpire. He also has Ampertaine Foreman and Malibu in his lineage.

Red Bull has five-star ratings in almost all traits, including replacement index of €130 and terminal index of €144.

€2,600 was the price of COOLFERN RENNE from Thomas O’Leary, Killorglin, Co. Kerry. Renne has Ewdenvale Ivor, Elderberry Galahad and Navarin in his sire stack.

Four heifers were offered at the sale with two selling for an average of €2,175.

Both heifers were from the Brookfield herd of Alan Borton, which is based in Newbridge, Co. Kildare.

Selling for €2,500 was BROOKFIELD PIPPA 2, a two-year-old in-calf (to EBY) daughter of Grangeford Jojo Et. Pippa’s dam has Ronick Iceman and Espoir in her sire stack. 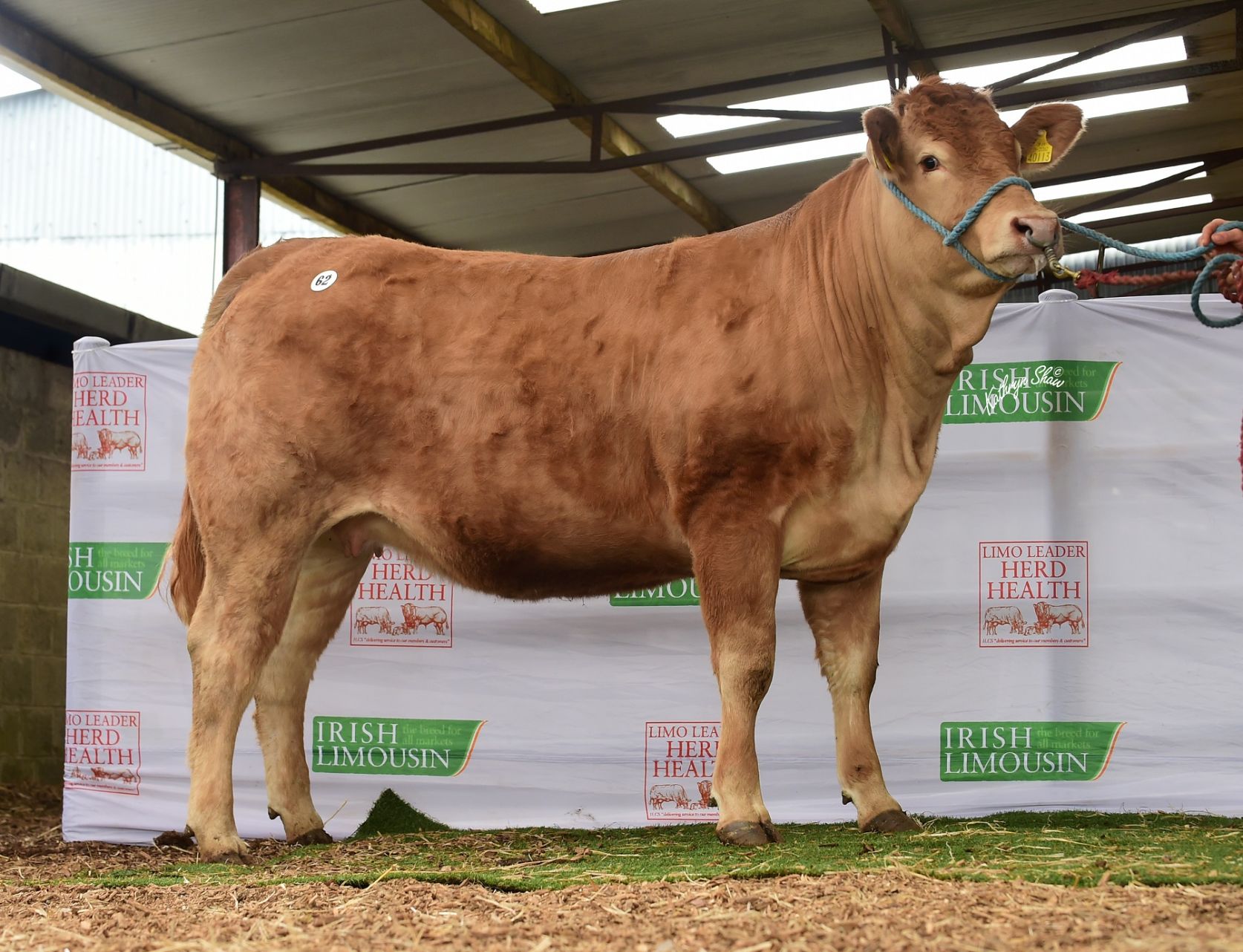 Pippa’s stablemate, Brookfield Roxie, climbed to €1,850. This heifer is a 15-mont- old and has Lodge Hamlet, Ampertaine Gigolo and Cloughhead Ernie in her lineage.

The society will host its next premier sale on Monday, October 25th, 2021.

- Advertisement -
Previous article
Suckler pairs to €2,820 at Ennis Mart
Next article
VIDEO: ‘They do not mind if they had 24 movements’