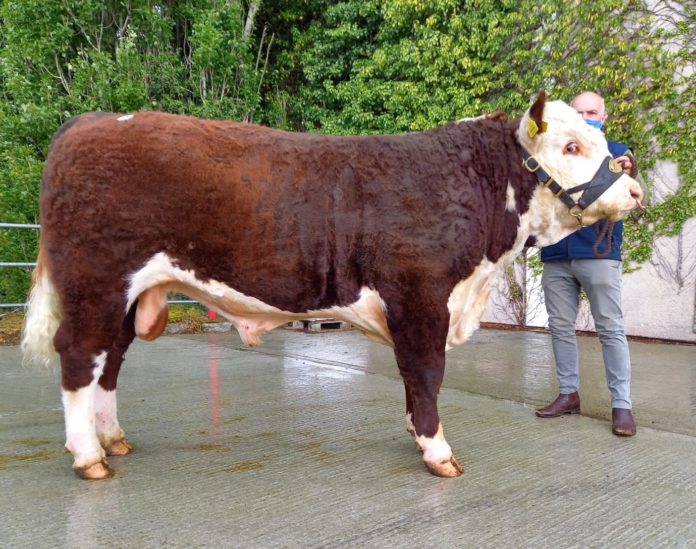 Report (with prices) from the Irish Hereford Breed Society’s bull sale held at Nenagh Mart on May 15th, 2021.

The Irish Hereford Breed Society held its final bull sale of spring 2021 on Saturday, May 15th at Nenagh Mart.

There were a large number of entries with 49 bulls catalogued.

However, the strong demand for Hereford bulls that has been seen consistently this spring, along with strong home sales, left many of the bulls being sold previous to the sale,”

Leading the ranks at €3,900 was Moyclare Seamus, bred by Michael Molloy of Moyclare Herefords, Offaly.

Furthermore, it was a successful day for new breeder; Michael Browne, of Gortacullin Herefords, Clare, who made his debut in the sales ring with Gortacullin Donald.

Born in October 2019 and bred from Gurteragh Maximus and Balleen Molly 1015, he has a 2.5% easy calving index and Four Star Replacement rate; he changed hands for €2,700.

Kieran Noonan of Double-Tree Herefords, Cork also put Double Tree Pete under the hammer for €2,700. October-2019-born Pete is a Trillick Best son and has a five-star terminal and replacement index.

There was a double success for West Cork breeder; John Cahalane of Droumgarriffe Herefords.

He went home with an empty trailer after selling both of his bulls entered for sale.

He has a five-star terminal and a four-star replacement index with five stars across the board for carcase weight and conformation. This fertility tested entries found a new home at €2,600, respectively.

On the other hand, fertility-tested €2,600 Garriffe 1 Miah, bred from Cill Cormaic Kasper and from a Kilsunny Goliath dam, presented for sale with a five-star replacement & a four-star terminal index.

You can read more reports from Hereford Society sales.

- Advertisement -
Previous articleFarmer’s Diary: I am not ready to write this lamb off just yet
Next article‘Do not use farmyard manure or any organic material to cover the silage pit’