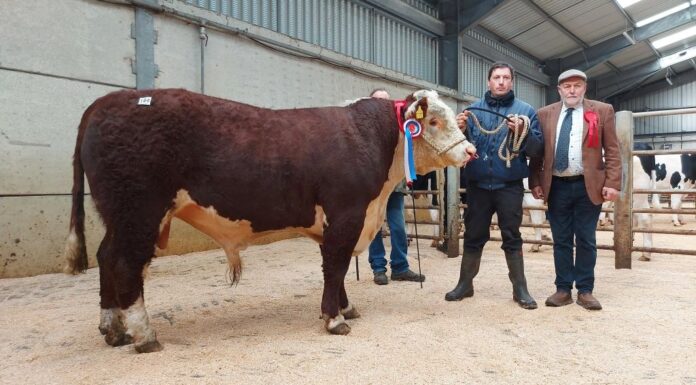 According to a spokesperson for the Irish Hereford Breed Society, 25 of the initial 36 bulls catalogued turned out for sale.

Of the 25 bulls, 21 changed hands, which gave rise to a clearance rate of 85%. Of those bulls that were sold, 65% made the average sale price or over.

Furthermore, the spokesperson noted that 25% of bulls fetched over the €4,000 mark.

Top of the price ranks at €4,000 was lot 175 – Ballinalick Braveheart from Willie Duff, Tipperary.

The September-2020-born “traditional-style bull” is by Ballinalick Galaxy and bred a Trillick Hotspur dam.

Albert De Cogen, who officiated as the pre-sale judge, tapped out lot 164, from Kilkenny man, Tom Brennan, as his champion.

Balleen Document, by Balleen Achiever, has five stars for the replacement index and milk along with four stars for terminal index. This May-2020-born bull found a new owner at €3,700.

The reserve champion on the day came in the form of lot 180 – Boveen Upton, from Joe O’Connor, Offaly.

This September-2020-born bull is by the same Cill Cormaic Kasper again – Ballyvlinngold Captain and a Corran Hill Classic dam and has a four-star replacement index and carcass figure.

Finn’s next lot into the ring at Kilkenny, Bawngarriff Douglas Eight, found a new owner at €3,400.

By Forestview Douglas also, a Cill Cormaic Kasper son, and a Kilsunny Goliath dam, he has a four-star terminal and replacement index.

Bred by Mairead Curtis and Michael Jones of Knockduff Herefords, Wexford, he is by Gageboro Morgan and from a Rathcor Ranger dam.

Meanwhile, they returned to the ring to sell their second lot, Knockduffpoll 1 Kevin, for €3,100.

Knockduffpoll 1 Kevin is by Gageboro Morgan and bred from a Glaslough Esquire dam.

- Advertisement -
Previous article
Cattle to €1,350 over and ewes to €246/hd at Blessington
Next article
3-bed farmhouse and 2-bed apartment on 6ac for rent