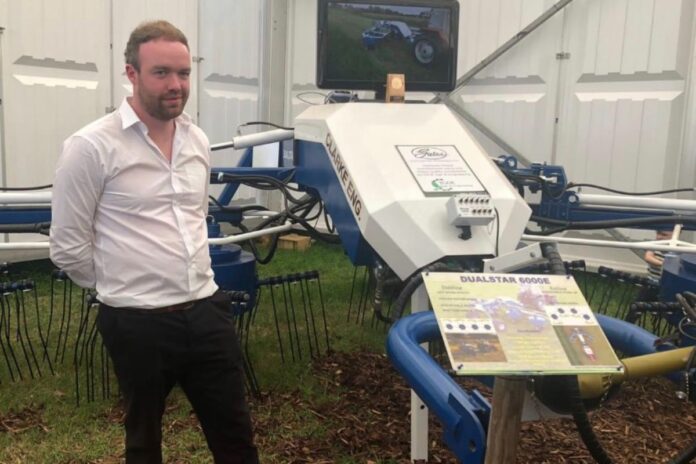 Michael Clarke, a Ballindine, Co Mayo native, has invented the novel dual-purpose machine, which has a steel chassis and steel rotors, that can both shake out and rake in grass.

“Clarke Agri Engineering is the name of my company. I founded it and am currently the only one employed.”

“Currently, I only work part-time at it at the moment until I get to the stage where I can work in my own business on a full-time basis.”

“I started the company as it has always been a goal of mine to become self-employed, and the Dualstar 6000E is my first product,” explained Clarke, who works full-time for Malone Farm Machinery as an engineer.

The Dualstar 6000E is a hydraulically operated dual-purpose machine with four rotors with a working width of 20ft.

It has its own independent hydraulic system (tank and pump) and has a minimum power requirement of 80hp.

Moreover, all controls and changeover operations can be performed from the comfort of an operator’s tractor cab “with the flick of a switch”.

Clarke continued: “When tedding, the axle folds up out of the way. The four rotors run perpendicular to the tractor with the rotors running against each other and at a high speed.”

“The angle of the tines and rotors can be adjusted, depending on the crop. When raking, they form a V behind the tractor, delivering a swath in the centre of the machine,” added Clarke, who was awarded the Young Innovation of the Year Award at this year’s Enterprise Ireland Innovation Arena Awards at the 2022 National Ploughing Championships.

“The rotors run with each other at a slower speed. All settings, except wheel height adjustment, are carried out in the cab of the tractor.”

He explained that the machine also has a designated safe/danger zone; proximity works when an operator comes within 10m of another, and anchoring works when a user moves more than 10m away. 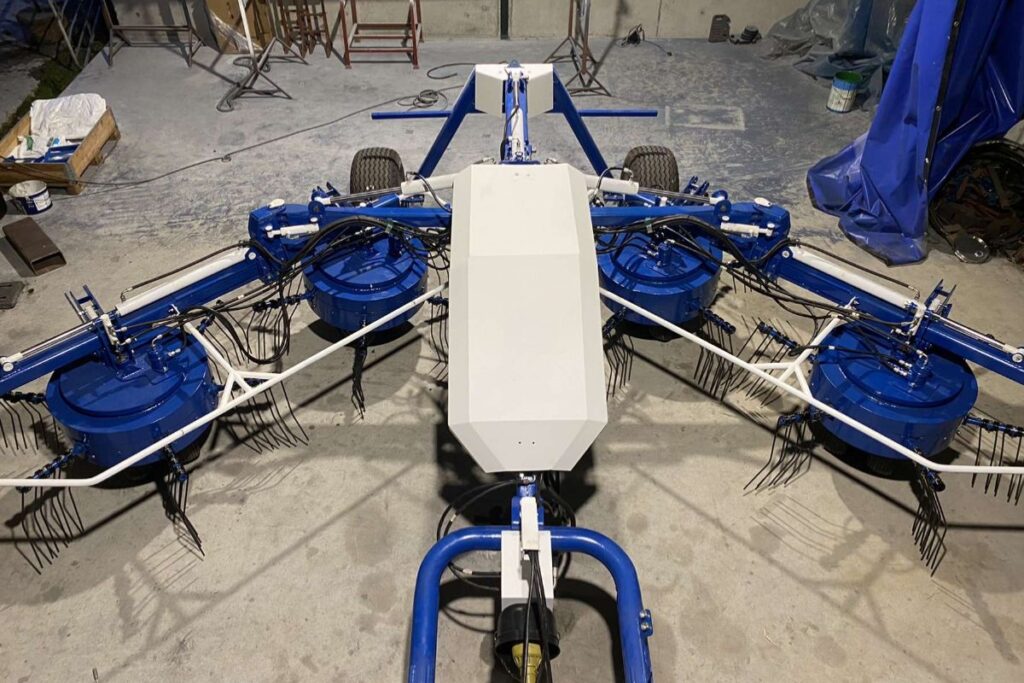 According to Clarke, his machine increases efficiency and reduces downtime in a short window for saving silage, hay, and haylage.

He continued: “With this invention, you only have to purchase one machine to do the two jobs. This will save money at the time of purchase.”

“There is also one less machine to maintain. Downtime is reduced as there is no need for swapping between machines.”

“For a farmer, by buying this machine, they can now carry out all the silage saving process themselves whereas before they would have had to buy two machines which would not have been feasible, in many cases.”

“This machine is unique as it is the only machine capable of carrying out both tasks at this size.” 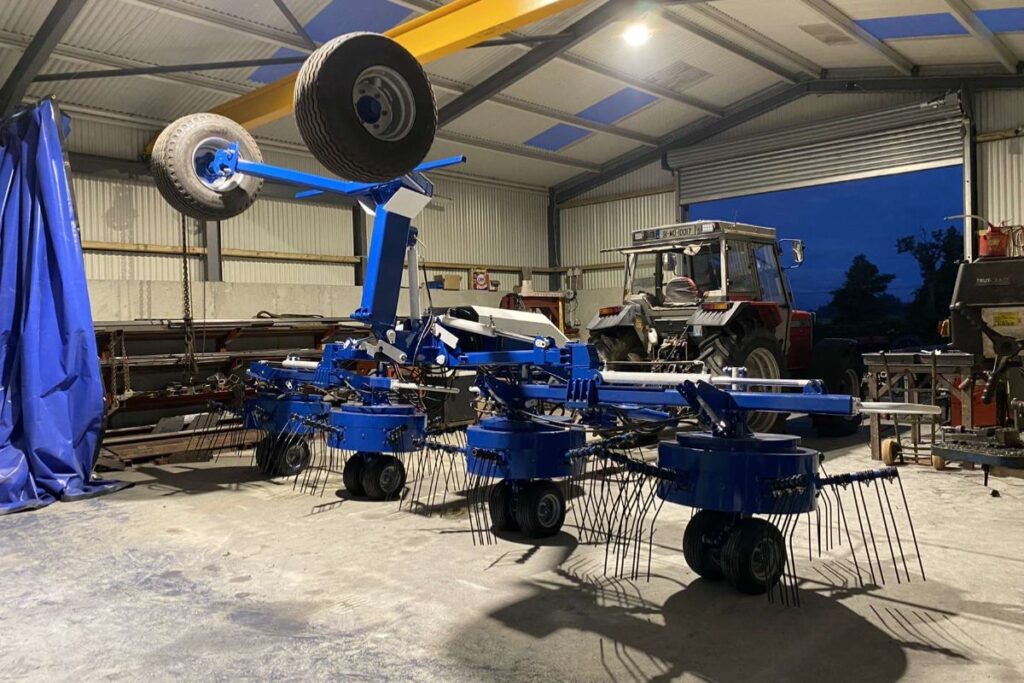 Feedback from contractors and farmers – his primary target market – has fed into plans to fine-tune his machine before its official launch to the Irish marketplace.

Modifications include adding a larger machine to its range, including the possibility of a 30ft model, which, he says, would be “more appealing” to contractors.

“When it is on the market, people will be able to purchase it locally and through dealers once a network is established.”

“I also make 3-meter tine harrows and carry out design and fabrication work. I intend to increase the range of harrows by adding a 6-meter harrow and a front harrow,” he concluded. 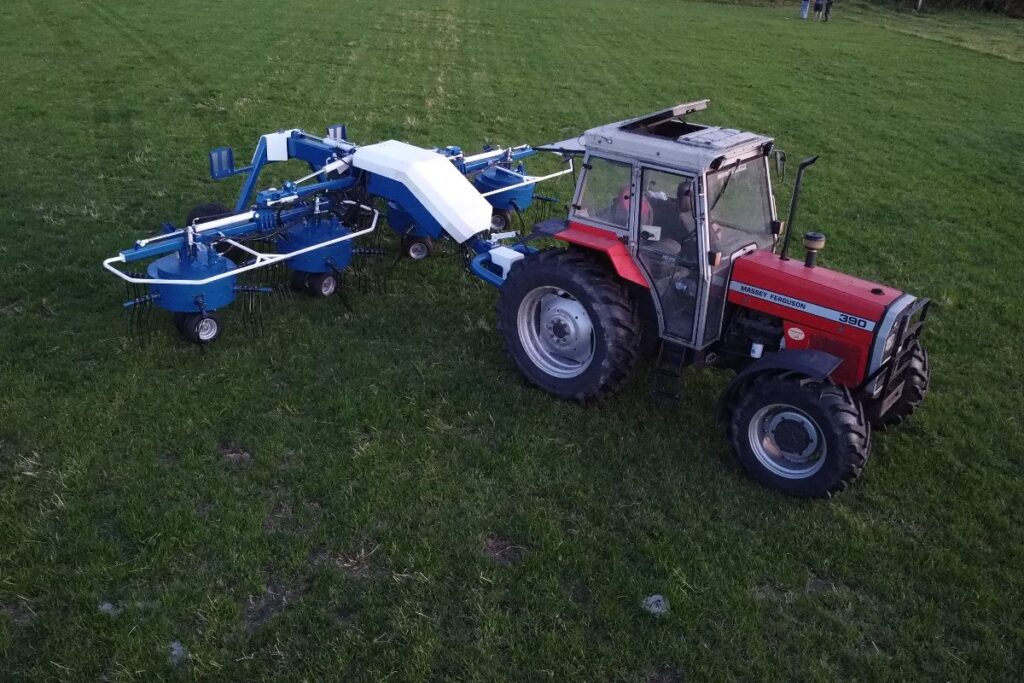 - Advertisement -
Previous article
‘Farming is not so much of a job as it is a calling’
Next article
43ac block of land makes just under €11,000/ac at auction