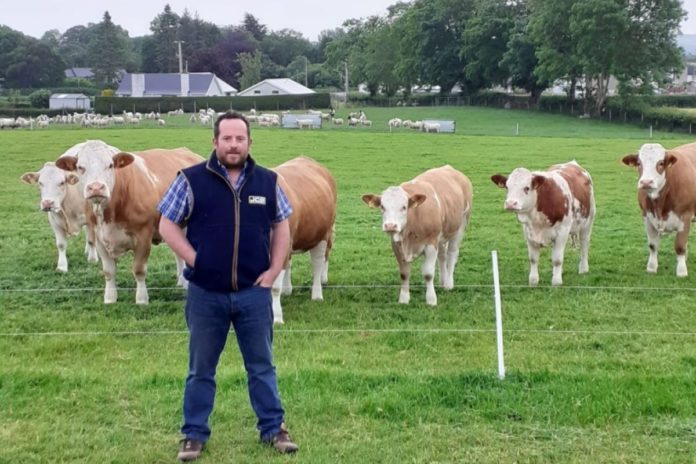 Steven Campbell on why he selects West of Ireland-bred cattle, using sexed semen, pelvic measuring heifers, and investing in technology to improve health and safety and efficiency.

West of Ireland-bred suckler breeding females are to the fore of Steven Campbell’s 100-cow farm, who has changed his cow-type to move towards compact calving for ease of management.

His enterprise, just outside Bellaghy, is home to 80 West of Ireland Simmental and Limousin-crosses and 20 pedigree Belted Galloways.

Why west of Ireland-bred cattle?

He introduced West of Ireland Simmental and Limousin-cross animals to breed his own replacements and weanling sales from the herd. The target mature cow weight of these animals is 650-700 kg.

He made the move following a Farm Innovation Visit (FIV) in September 2019 run by CAFRE and part-funded by the EU Rural Development Programme to a farm in England operating Genus RMS (Reproductive Management System).

They ran a 12-week programme with Steven’s herd, which involved walking and chalking cows daily during the breeding season. In addition, they used sexed semen from bulls with high milk traits and maternal figures, which would produce suitable replacement heifers.

Going forward, he will use sexed semen on heifers and conventional semen on mature cows within the herd.

The calving season is typically 12 weeks and runs from October to December.

Calving cows in the autumn time suits Steven’s workload as he has other enterprises to manage.

He will wean offspring each July-August at target weights of 400-450kgs.

Then, he will pelvic measure heifers for selection as suitable replacements. The suckler farmer will sell male calves to a beef finisher as bulls again with a target weight of 400-450kgs for a 90-120 day finishing period.

Scanning results have shown that over 90% of the heifers were in-calf to AI.  He is satisifed with these results and counts the implementation of the technology on his farm as “good value for money”.

There had been an issue picking up cows with silent heats, and Steven would consider investing in collars to aid heat detection in future.

He has invested in 360° cameras for the cattle houses, which he stated was a super investment as they assist with heat detection and calving.

Steven has also updated his handling facilities and invested in a Clipex Squeeze crush. He finds it invaluable for the health and safety of the operator and animal now that cows are handled more frequently.

Steven, like many others, has experienced the impacts of COVID.

In particular, the impact it has had on BDG group meetings.  Steven commented:

“I enjoy the group meetings and seeing the different farming techniques used by other group members.”

“This sometimes leads to those lightbulb moments for improving your own farm practices.”

“Let’s hope we will be enjoying the benefits of on-farm meetings again very soon.”

The Department of Agriculture, Environment and Rural Affairs and the European Agricultural Fund for Rural Development funds the BDGs Scheme.

We recently featured an article on compact calving.