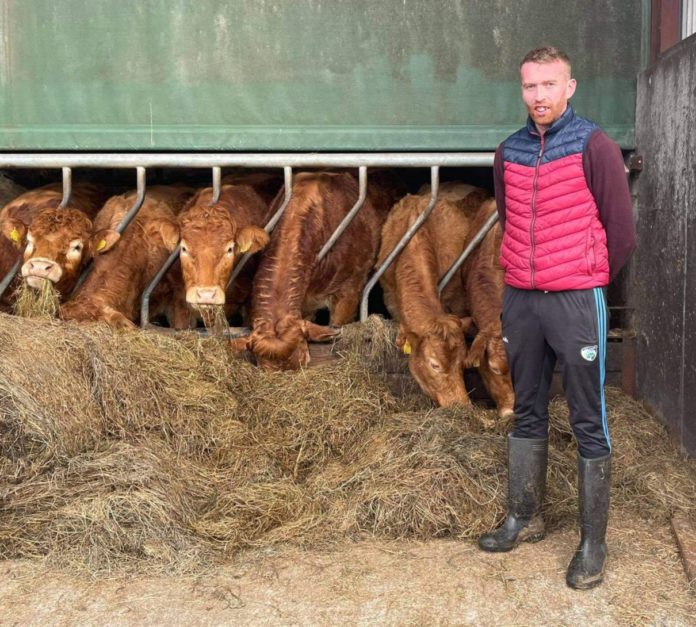 In this week’s Suckler Focus, That’s Farming, speaks to Damien Ryan of Cappanarrow Limousins and Belgian Blues about selective breeding, producing quality progeny for export and AI and ET work.

Executing a selective breeding policy, utilising superior genetics, and producing one calf per cow per year are the key elements of a successful suckler operation.

That is the view of Damien Ryan, a 50-cow suckler farmer, who claims that cattle sales are “better this year than ever before”.

He farms 15 pedigree Limousins, 2 pedigree Belgian Blues under the Cappanarrow prefix and over 30 commercial breeding females with his father, Liam, at the foot of the Slieve Bloom Mountains in Co. Laois.

The fourth-generation full-time farmer has a land base of 75-acres of grassland and 63-acres of commonage.

The 27-year-old’s pedigree Limousin cattle breeding venture began in 2012 with the purchase of Rodeen Elaine, a heifer by Teddy, and out of a Ferry dam, in-calf to Limo Tanat.

“My dad first introduced me to Limousin cattle. He started with 12 Hereford cows, but farmers were swinging more towards continental breeds at the time. My dad decided to purchase a Dauphin bull, Clonard Paul, in 2000.”

“He turned out to be the best purchase ever. Paul bred some of the best females in our herd. I just really fell in love with them from that moment on. My father’s Hereford cows are the basis of most of the commercial side of the herd.”

In 2014, he purchased his second heifer, Keeltown Heidi, by Procter Cavalier and out of a Litron dam. She has since bred females by On-Dit and Zag, which he also has retained.

“I can pick the best genetics available as I do my own AI. This year, I have used sires such as Ampertain Majestic, Wilodge Cerberus, Mereside Favori, Whiskey Infinity, Keltic Handsome, Tomschoice Lexicon and Tomschoice Ironstone,” he told That’s Farming.

“I am using a lot of UK bulls on my pedigree Limousin herd. These include Wilodge Cerberus, Whinfellpark Lomu, Procter Cavalier Sympa, Rahoney Isaac, Tomschoice Lexicon, Ampertain Gigolo and Whiskey Infinity. I carry out AI for six weeks, and after that, our Wilodge Cerberus X Ronick Hawk stock bull serves repeats and late-calvers.”

“I selected Limousins because they are perfect, in my opinion. They have muscle, length, size, fertility, and ease of calving, which is the biggest thing.”

On the other hand, in 2018, he acquired his first Belgian Blue, Clonincurragh Jasmine, an Empire daughter, who has since had two Attribute female replacements.

He believes the breed’s docility and conformation are “second to none”, and given this, he intends to increase to five females in the coming years.

Furthermore, the commercial herd consists of all Limousin females bred by the family’s own stock bulls. “These Dauphin X Gamin cows produce top-quality E grade Belgian Blue calves. They have no issue calving, which is the real bonus of a Limousin dam.”

“I chose Belgian Blues for crossing on our Limousin commercial herd as part of our calf-to-weanling system. We began using Belgian Blue genetics on our suckler herd for the export market.”

“We aim to achieve an average price of €3.00/kg/calf and find they are the best way to do just that,” added Ryan, who runs a Boherard Hurricane, son to mop-up repeats.

“To note, we sell most of our progeny privately at home. This year so far, we have sold 10 weanlings to an average price of €4.00/kg. I sell most of my pedigree Limousin bulls at 13 months and have secured €3,000, on average, for them.”

Cow-type and age of first calving

Overall, Damien’s ideal cow is docile, long and muscley with strong maternal abilities. He culls cows when they reach ten years of age and sells these in his local mart.

“I only retain pedigree females and do not put heifers in-calf until they are about 600kg. From experience, I find they turn into big strong cows and have more age come calving time, but everyone is different.”

“I normally calve them down at 3-years-old; the reason behind this is to allow the females to mature to their full potential, and I find this is a massive help when they go to calf down.”

“I do a small bit of ET work, mainly on my pedigree Belgian Blues. I recently purchased Limousin embryos by Sympa X Samy and implanted them in two heifers.”

“It is my first time to do it. It is probably costly enough, but as I can do my own AI, I save some of the cost. I find if ET is lucky for you, it is not dear, but if you get no return, it is.”

Optimistic for the future, the young farmer intends to increase his pedigree cattle numbers to 25 cows and reduce crossbred cow numbers to facilitate this.

He has a desire to improve his pedigree cattle’s quality, with his “main ambition in life” being to secure a Cappanarrow-bred Limousin bull into Irish AI.

And, in saying that, what is his outlook for the sector’s future?

“I think the future is bright as the number of quality sucklers in Ireland has dropped due to dairy, which means that good cattle are getting scarcer by the year. This means anyone that wants good cattle will pay top price for good cattle.”

“Farmers are not rewarded enough for the quality progeny they are producing. It has always been the case and probably always will be.” Ryan concluded.

- Advertisement -
Previous article
€390,000 tax bill for farmer
Next article
‘No excuses for price not to increase significantly above €4/kg’