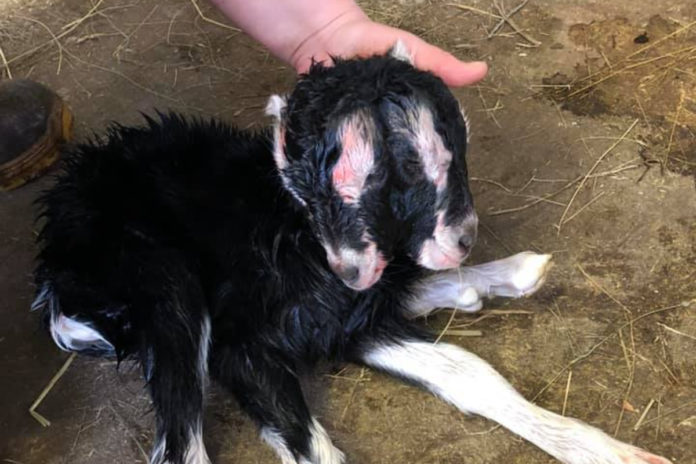 A two-headed kid was born on a farm in the US earlier this month. Nueske Farms in Wittenberg welcomed the rare arrival on April 5th.

He has been called Janus after the Greek god of beginnings, transition, time, duality and endings, according to the farm owners.

In a post on social media on April 5th, they said: “Had our first two-headed baby boy today! He needed some help coming out after his brother that was perfectly normal.”

“The mom is doing good, we brought him home to give him some extra attention and care – hope he lives!” the post added.

In a further update on April 13th, they explained that Janus was examined by a vet at a local clinic.

“Dr. Chadwick listened to his heart and lungs, to which both sounded good. There were no crackles/wheezes; his lungs sounded clear.”

“No limb/leg abnormalities are present. Other than his apparent “two heads”, Janus checks out as a normal baby goat.”

“His right mouth has a cleft palate, and his left mouth was difficult to see into, but may also have some degree of cleft palate.”

Future surgery to correct the cleft palate is an option, according to the post. “Janus’ outer eyes seem to have sight and it’s uncertain at this time if his inner eyes are able to see.”

“Janus’ x-rays revealed that he has 2-fully formed craniums/frontal bones of his skull that are fused at the lateral (sides) occipital/parietal and temporal bones of each skull.”

“So basically, it is thought that he has 2 brains in the front that connect together in the back of his skull.”

Each head appears to have its own spinal cord/canal that fuses with the spine; he seems to have one stomach and singular major organs.

“Janus was a bit wiggly during his x-rays, so the images aren’t super clear. He was not sedated for the x-rays.”

“Baby Janus continues to amaze us, and we are happy to have Wisconsin Valley Veterinary Service on board to help us look after his well-being.” the update added.