That's FarmingThat\'s Farming Irelands Largest Farming News, Properties and Classifieds Network
HomeFarming NewsVIDEO: How do TB tests work and how effective are they? 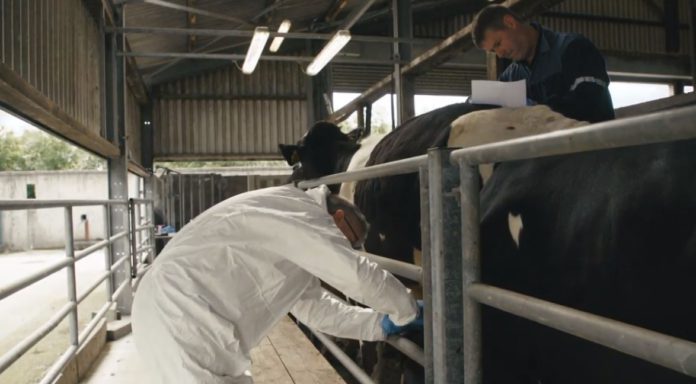 VIDEO: How do TB tests work and how effective are they?

In this video, the Department of Agriculture, Food and the Marine explained how TB in cattle can be diagnosed by a variety of tests, including a skin test and a Gamma-Interferon blood test.

How does the skin test work?

“The TB skin test is very well established, has been examined many times and has been used in many successful national eradication schemes.” explained the DAFM spokesperson who outlined the procedure involved.

“On average, if you had a pen of 10 cattle, each that is known to have TB, the skin test will identify eight out of ten of those animals.”

The test is 80% sensitive and with further testing, it is then likely that all ten will be identified and removed.

The test, the spokesperson outlined, has its limitations as it cannot detect recently infected animals. “About six weeks must have passed after infection before the test will work.”

“If an animal is very badly infected and the disease has progressed, the animal is known to be anergic and the skin test is compromised and becomes less likely to work.”

The spokesperson highlighted the importance of having adequate handling facilities for TB testing. “Poor testing will fail to correctly identify TB.”

The DAFM explained that the chance of an uninfected animal reacting to this test is about 1 to 5,000.

“It will detect an infected animal earlier than the skin test at 14-21 days – it is better at detecting new infections.”

A limitation of this test is that it is not as specific as the skin test. The DAFM explained that the chance of an uninfected animal reacting to this test is about 4 to 100 – this is why it is not used as a general screening test.

Image source: Department of Agriculture, Food and the Marine Youtube