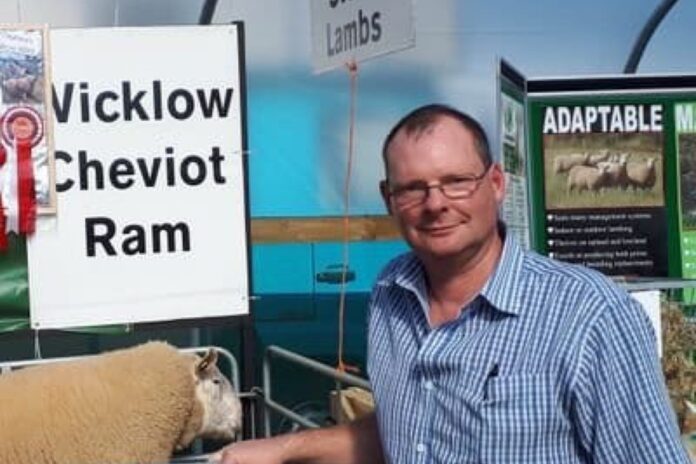 ‘The future is good for the sheep sector, but costs are crippling’– part-time 320-ewe farmer

It is no surprise John Malone is following in the footsteps of his father and grandfather by choosing Wicklow Cheviot sheep for his farm’s marginal land.

The second-generation farmer has over 320 Wicklow Cheviot ewes on 60 hectares, which he mainly owns near Roundwood, County Wicklow.

He works part-time in the pharmaceutical industry, holding a BSc in general science from Queens University Belfast and a MSc in Food Science from UCD (University College Dublin).

He finds his off-farm position and farming commitment to be a “good” mix as it enables him to work outside the enterprise and take time off during busy periods.

“I was always going to be involved in farming in some way. I have two brothers, James, and Thomas, who help when required,” John Malone told That’s Farming.

“My father, Sean, who is in his 80s, looks after livestock when I work and has farmed all his life. We used to keep suckler cows, but when I started working full-time, I got out of the cows because I could not manage to do everything.

“So, I ventured into sheep and have worked part-time the last couple of years,” he explained.

John is involved in promoting the breed as PRO of Wicklow Cheviot Sheep Owners’ Association and has served as chairman for five years previously.

He believes they are a “well-sought after” breed, with people flocking from all counties of Ireland to autumn sales “to purchase an ideal sheep to cross with Suffolks”.

John selects the breed because of its hardiness to lamb outdoors and mothering abilities.

He puts ewes out to graze on the commonage after weaning for the summer.

“If you get the speckled ewe lamb and Suffolk lamb, they can go with terminal sires and produce a great lamb for kill-out percentage.”

He crosses half his ewes to Wicklow Cheviot rams and the remainder to Suffolk-cross rams enabling him to have around 70 Suffolk-cross hoggets for the breeding hogget sales.

John introduces 80 ewes each to these two mature Wicklow Cheviot rams and runs around 30 ewes with a hogget ram.

He initially keeps them in smaller bunches and then groups them in a few weeks before swapping rams if required.

His stock rams include two Wicklow Cheviots and a Suffolk from Mick Kelly.

He lambs most ewes in April, one batch in late March, because of weather conditions, and hopes for grass growth into April and milder weather.

A student from UCD carries out their placement each year on the farm and assists with lambing.

In John’s eyes, outdoor lambing is “healthier”, harbours fewer diseases and costs less because of its reliance on a grass-based system; however, ewes scanned in-lamb with twins lamb indoors.

Generally, he fattens all his Wicklow Cheviot lambs for Kildare Chilling until Christmas, receiving a quality assurance bonus.

However, he is selling them when they reach 40kgs in Carnew Mart – due to rising input costs.

The Wicklow sheep farmer keeps his own Wicklow Cheviot replacements eligible for breeding and sells Suffolk hoggets at breeding sales in Blessington and Aughrim Sheep Breeders’ Show and Sale in Carnew Mart and culls inferior types.

He has a strict culling policy that removes ewes from the flock with prolapses, C-sections and other complications.

“All costs have spiralled out of control, and it has been a difficult year for the sheep farming sector.”

“It is a low-income sector at the best of times, and one that is going to need a lot of support going forward because we cannot keep pace with the cost of fertiliser and feed at present.”

He mentioned that many sheep farmers have cut back on their fertiliser usage with his focus on improving the farm’s soil fertility, lime spreading, and creating a farm reseeding programme involving multi-species and fodder crops.

In addition, he plans to measure grass in the future with rising input costs and has availed of TAMS grants for fencing in the past.

John intends to maintain ewe numbers to allocate family time and other interests, including an involvement in local community groups and judging at agricultural shows and sheep shearing competitions.

He also outlined that he hopes his two young daughters will take an interest in the farm in the future.

“I believe there is a good future in sheep farming and a decrease in worldwide production and demand for sheep meat. Europe has always been our big market, and I think it will continue to be.”

“China seems to be taking a lot of the New Zealand and Australian lamb, but with shipping costs the way they are, hopefully, there will not be an influx from those countries into the European market.”

“In my opinion, the future is good for the sheep sector, but costs are crippling it at the moment.”

He also shared his thoughts on the €12/ewe measure as part of the Sheep Improvement Scheme announced recently, as reported by That’s Farming.

“We would have been hoping for more support from the government, but it went from €10 to €12/ewe, which was disappointing.”

“I feel the sheep sector is not being supported well enough.”

“We met with the Minister for Agriculture, Food and the Maine and raised concerns about low incomes in the sheep sector. We highlighted how it is a sector that needs support and the important role that we play there – especially upland farmers maintaining the biodiversity of the hills.”

“I believe it is very important, and that is where the Wicklow Cheviot breed comes into its own.”

“They do well on the mountain, and without sheep farming on the hills, you certainly would not have the hills in the good environmental condition required.”

“I also want to note we also had a good discussion with him on the ACRES scheme. We want as many farmers to apply, to be allowed into the scheme and that there is a good payment for everyone that applies,” he concluded/