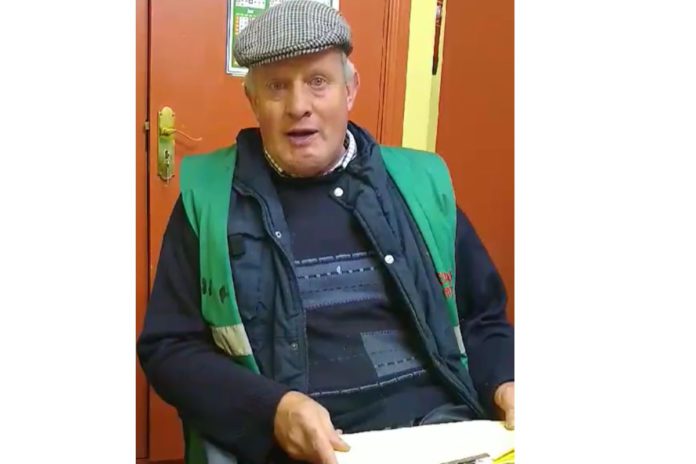 VIDEO: ‘This online thing is a complete and utter joke’ – mart manager

Dan McCarthy, manager of Kenmare Co-op Mart, has described its first sale held under level 5 Covid-19 restrictions as “a disaster”.

The esteemed mart manager told That’s Farming that “today has been one of the toughest days that I have ever put down, as manager of Kenmare Mart”.

Under level 5 restrictions, sales are held online with no buyers or sellers allowed into the sales ring, therefore, business must be conducted remotely.

The Kerry native made an emotional appeal in a video on social media, which has gone viral.

“I came here on March 4th in 2004 as manager. What the Department [of Agriculture, Food and the Marine] is doing to us in marts is a total fiasco.”

“It is not right and fair to think that, we, as farmers, have to put up with this with no internet and having to bid online. I was looking at a box on the front of the stage all day long trying to get people to buy cattle.”

“The internet kept going down when one man would bid and another one then.”

He said that the mart successfully held sales when the country was placed under level 3 restrictions for several months. “There was social distancing, 2 metres apart, and there was no worry that Covid-19 would come into a mart if they ran sales like we did.”

‘We are front line workers with the farmers’

He has appealed to members of the farming community to contact NPHET, TDs, and the Department of Agriculture to “please listen to the people on the front line”.

He said that farmers are under pressure and stress, which, he added, will have an impact on their mental health, if the issue is not resolved within the next fortnight.

“What is happening cannot continue. We have to be allowed to let 20-25 people into the ring to buy cattle. This online thing is a complete and utter joke – it can’t work, and it won’t work.”

‘This is a total and utter disaster’

“Please listen to me and take note of what I am saying tonight. This is a total and utter disaster for the people that are trying to sell their cattle.”

“I am asking you to help me and help the people that are trying to get the country moving again. We are trying to make money for a few farmers.”

“I know the frontline workers are under pressure, but after today, we are under severe pressure and I think every mart that was on today, I can safely say, if it was anything like we had, it was a disaster,” he concluded.