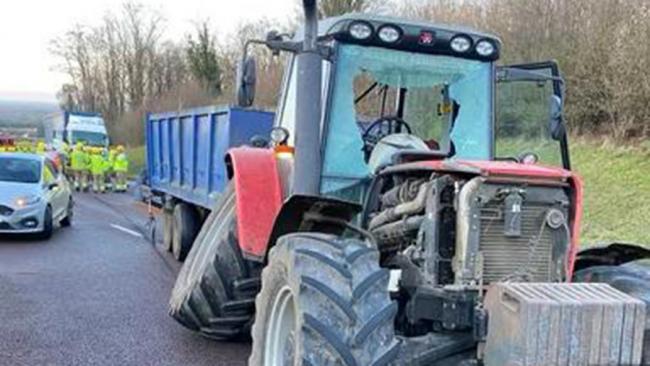 Tractor driver ‘lucky to be alive’ after collision with lorry

A farmworker says he is “lucky to be alive” after his tractor collided with a lorry in recent weeks.

Spencer Saveall and his dog, Flo, were involved in the crash between Cricklade and Blunsdon on Saturday, December 5th, 2020.

He was travelling home when his Massey Ferguson was struck from behind by a lorry.

Speaking to BBC about the incident, the 22-year-old said:

He was taken to Great Western Hospital in Swindon for treatment and was later released. Meanwhile, the lorry driver, a female in her 30s, was hospitalised with minor injuries.

Saveall sustained non-life-threatening injuries including a bruised and grazed neck and a cut to his finger.

He was involved in another tractor-related incident four years ago. A truck hit him while he drove the tractor along the same stretch of road.

Leb Webster, farm owner, told Swindon Advertiser: “He’s unlucky to have had two of these crashes in his young life but lucky to have walked away from them.”

“I think lorry drivers go into cruise control in the slow lane thinking there won’t be any vehicles going slower than they are.”

“They don’t consider that they might have to slow down and pull out into another lane because there’s a tractor up ahead.”

“There are a lot of farms off the A419 and we have to use it to do what we need to do, there’s no other option.”