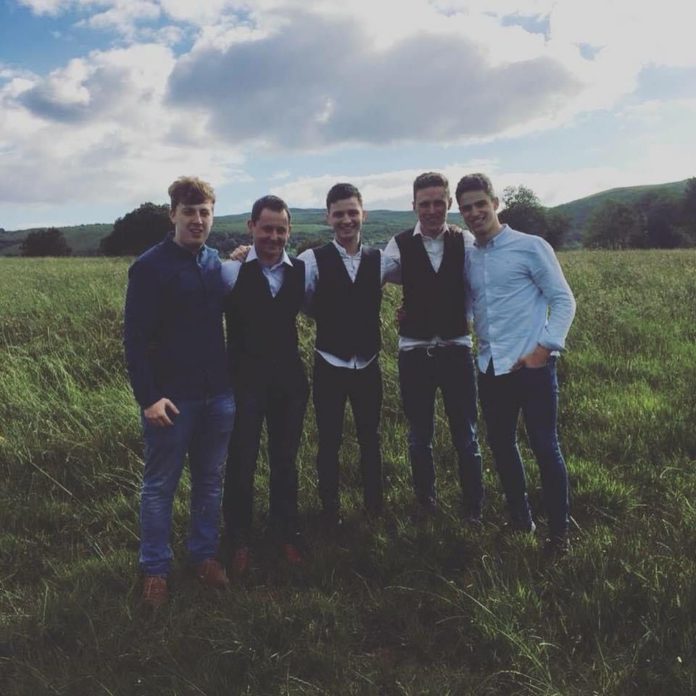 The Tumbling Paddies taking the music scene by storm

The Tumbling Paddies is country-folk and pop group from Co. Fermanagh consisting of six males, aged from eighteen to twenty-two-years-old.

The manager of the band, Andy Cox, tells Conor Halpin, journalism intern, about their musical career.

Who are The Tumbling Paddies?

Gareth Maguire role’s in the band is as the lead singer, and he also plays the tin whistle and flute. Our guitar player is Lee Jones, and then John Mc Cann is our drummer. On the banjo and guitar is Ciaran Owens while Martin Treacy plays the accordion, and our keyboard player is Oisin McManus.

Have they always been passionate about music?

Music was always an interest highly regarded by the band. I recall a time in conversation with Garth’s mam. She told me that he would attend sean nós dancing at the age of four or five-years of old.

John McCann is an all-Ireland champion on five instruments, and each band member has won a medal for being All-Ireland Fleadh champion.

How did you meet the band?

I heard them one night in a pub and approached them to see if the band would like a manager, and they said that they would. Also, I said that we would need to get some good original songs recorded and we went to the recording studio to do just that.

What are some of the singles that the band has recorded so far?

The first song we completed was a song entitled, I Guess. I co-wrote this song with Sebastian Kalki from Poland. The band recorded the track in Newtown Studios in Bundoran, Co. Donegal.

Furthermore, the second song was a song called Pretty Girl. We went to Jonathan Owens in Spout Studios for the recording in Granard, Co. Longford.

We have recorded eight original songs, and we also had the opportunity to do a duet with Derek Ryan called On the Sesh.

Our song, Superstars and Heroes, which was co-written with the lads, came second in a worldwide search and we were the only Irish band for the song of the year.

Do you have upcoming albums or singles planned for the band?

Hopefully, we will have the album out by the end of 2021, and we will be able to have an album launch. I co-wrote ten tracks and five of these have been recorded, and the other five are to be recorded soon.

Has the band gained traction overseas?

We did a couple of gigs in Germany where there was over 10,000-15,000 at the gigs. They seemed to love them as they like the trad and folk-country music.

Do you write all the songs for The Tumbling Paddies?

I write most of the song lyrics for the band and sometimes they are co-written with other writers and the band put the music to the lyrics. I have written over fifty songs for other singers, such as Paul Kelly, and Cliona Hagan.

What audience does the band mainly attract?

They seem to attract all ages from seventeen to eighty-years-old. At the concerts, it may be slightly older and then the dances, it may be the younger audience, but it really can depend.

How did you feel the drive-in country music shows has gone for the band?

We have done a few drive-in gigs. One was in Enniskillen, and it was very good. It attracted a huge crowd on the day, and thankfully, the weather stayed good.

What would the band’s summer and winter schedule usually consist of?

During the summer, we would play at the Clonmany Festival and events such as the Cowboys and Heroes Festival and the ‘Ploughing’. Our summer schedule would make up around five nights a week.

During the winter, we were out three to four nights a week gigging. They all got cancelled, but the diary is full if we can get to do them next year.

What challenges has the pandemic presented?

We had a full diary of dates in Ireland and England, and we had planned to do a small tour of America as we were getting a lot of airplay over there. Several people had been in contact to see if we would be interested in coming over.

The band had planned to film with a camera crew which was going to run for a few days with a television company, and it was cancelled days beforehand due to Covid-19.

We had intended to purchase new lorry and had a new sound system ordered just before global pandemic struck. The band were taking off and getting very well established, and we have been having a lot of emphasis from record companies lately.

What was the last gig the band played before the pandemic?

They played the Sunday before the first lockdown at The Allingham Arms Hotel in Bundoran, Co. Donegal and it was sold-out. Hopefully, we will get back gigging again.