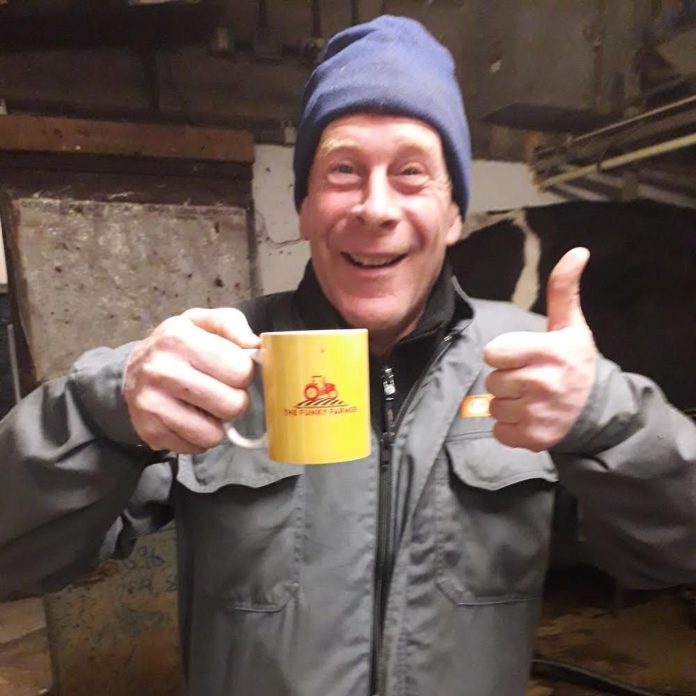 The Funky Farmer: Dairy farming, Youtube and publishing a book

The Tytherington native provides Conor Halpin, journalism intern, with an insight into his family, farming, and his growing YouTube channel.

What type of farm do you run?

My brother Tom and I run a 145-acre dairy farming enterprise in the beautiful English countryside. The farm consists of eighty British Friesian cows and they are milked through an old abreast milking parlour unit.

Do you exhibit livestock at agricultural shows?

My son Harry has mentioned he would like to show some animals when he is older and the young farmer clubs (YFC) is a good way for that to happen.

Did you pursue agriculture in college?

I attended Hartpury Agricultural College in Gloucestershire and completed an O.N.D in agriculture. I made lifelong friends there and I would highly recommend anyone interested in agriculture to study a course.

I had the idea of producing a DVD of the farm, so I set about filming the farm for a year on video. When the filming was done, I realised that there was too much footage for a DVD. I then put some of the footage on YouTube as that was a convenient way for my kids to watch what I did at work.

I had no plans to set up a channel or make it a regular thing in 2011 and vlogging was not a big thing then like it is now. The videos started to attract views and I enjoyed interacting with people doing it, so I decided to carry on.

You have published a book entitled: A Year on a Dairy Farm?

In 2009, I carried a camera on our farm for a year and recorded my daily life in pictures. This I had printed into a one-off book for my parent’s Christmas present and everyone was very impressed with it.

I decided to approach a publisher, Amberley Publishing. A year on a Dairy Farm, consisting of two hundred colour photographs showing life on the farm through the seasons, was published in 2010.

What advice would you give aspiring YouTubers?

Do not worry about buying expensive video equipment and just concentrate on making your content interesting. Nobody cares if you have the latest camera, they just want to be entertained.

Do you find it is difficult to capture farming activities when you are working on-farm?

It can be tricky and sometimes I do not film what I am doing as I am better off concentrating on the job. You do not want to be trying to film while in the middle of a prolapse on a cow, for example.  I do use a tripod that allows me to film myself while working and I then edit it into what I’m doing at a later stage.

What challenges has the pandemic brought to your daily life?

There were a few challenges at the start when our milk buyer told us to cut back production. They were not sure if they could sell the milk, but that was quickly resolved.

I enjoyed having the kids home during the first lockdown as they were able to come out with me on the farm and see things that would normally happen while they were at school.

What are your plans for the future?

The next few years will guide us to how we can adapt to the Brexit trade deal and I think for many farms it will be a question of whether they can survive these changes.

Also, am hoping we will be able to get involved with some of the new schemes that are wildlife focused as that is what I am interested in, but I will have to see how that can blend into our farming.

In terms of YouTube, I will continue to record farm life and I would like to involve the kids more with it as they get older.

They bring a different dimension to the videos. I will find ways to improve what I do to involve them such as operating a drone for the videos.