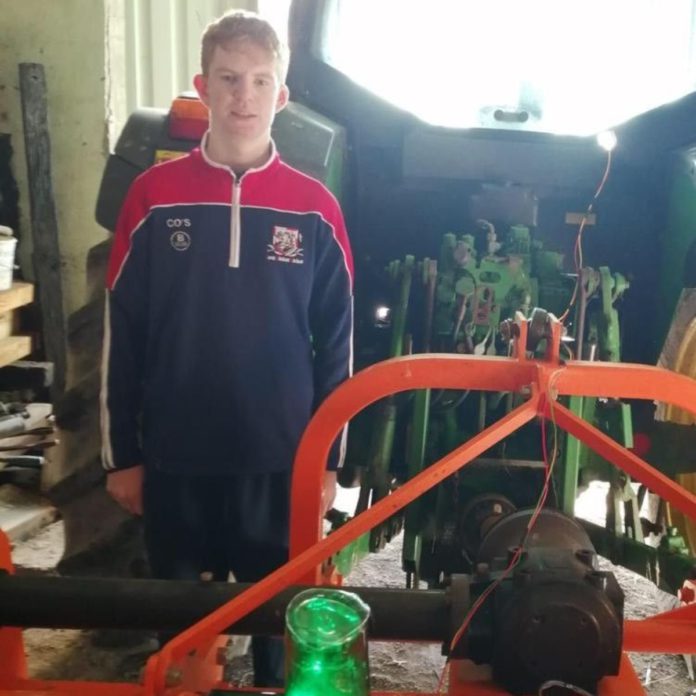 Cathal O’Sullivan from Cork has been named the overall winner of the ABP Farm Safety Award at the 2021 BT Young Scientist and Technology Exhibition (BTYSTE) for his farms safety device.

He was recognised for his innovative project, titled ‘Preventing machine accidents with warning systems’.

Cathal impressed the judges with his innovative and forward-thinking project that is designed to prevent accidental injuries and deaths from farm machinery.

The student from Beara Community School in Castletown-Bearhaven designed a device that alerts users when they are too close in proximity to spinning machine parts, preventing them from accidentally coming into contact with them.

In a video, the student said: “I live in a rural area in the west of Ireland. As I was brought up on a farm, I know all too well, the dangers farmers face every day.”

“I noticed machinery is particularly dangerous. In 2019, there were two people killed from becoming entangled in farm machinery in Ireland. About ten more were severely injured.”

“Most accidents are caused by becoming too complacent around machinery or thinking the machine is not spinning when it actually is.”

He said his project aims to prevent accidents and help people feel safe around machinery by alerting them when it is dangerous or safe.

In a video, O’Sullivan outlined how his prototype operates. He explained that the prototype works universally on all machines and can be easily transferred from one machine to another.

“It is also possible to adapt it to lawn mowers, factory machinery and even kitchen blenders.”

The area of farm safety is a priority for ABP, the company stated, and it is an issue that is still prevalent in Ireland today.

The Department of Agriculture, Food, and the Marine reports that there were 19 fatal incidents on farms in 2020. Three of these were children under the age of 18, and nine were farmers aged 65 or more.

Annie Graham, Livestock Strategy Manager, ABP, said: “On behalf of everyone in ABP, I would like to congratulate Cathal O’Sullivan on his successful award submission.”

“His innovative project embodies the spirit of this award, finding new solutions to make our farms safer.”

“We would also like to thank all of the entrants for their submissions, and for their role in helping to increase awareness around this very important issue.” Graham concluded.

Meanwhile, Cian Walsh has been announced as the Teagasc award winner at the BT Young Scientist and Technology Exhibition 2021 (BTYSTE) for his project on growing hemp.

- Advertisement -
Previous articleDog attacks: ‘In one instance, an animal was decapitated by a dog’
Next articleBDGP 2021: Deadline looming with text messages to issue