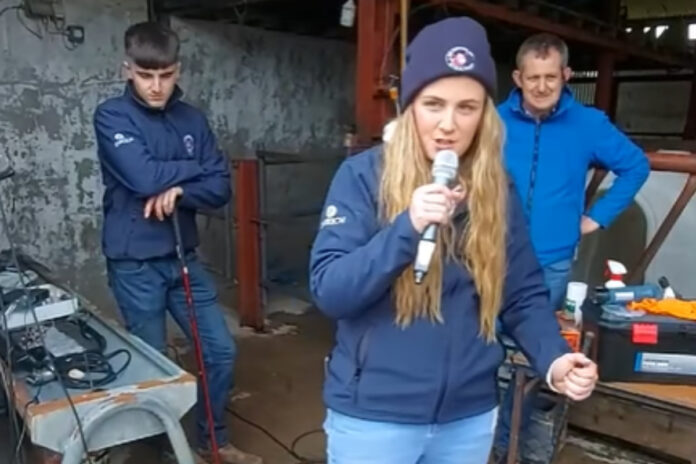 Over 60 participants – ranging from 8-18-years – from all corners of the country gathered in Co Leitrim for the Irish Shorthorn Society’s first youth development programme (YDP) event of the year last weekend.

The family has operated the enterprise in Leitrim village, along the banks of the River Shannon, for the past four generations.

The day commenced with Anthony Dockery, MC for the day, outlining the all-important health and safety requirements for the event, especially in handling cattle.

Frank and Grainne Whitney welcomed the large crowd to their farm, while Sinead Flanagan, a member of the organising committee, welcomed attendees and discussed the development of YDP in the vicinity.

Then, society president, Kieran Flatley, and his brother, Adrian, gave a “very informative” demonstration on preparing an animal for the show ring.

Following this, a demonstration on how to show an animal in the ring was presented, which provided tips and tricks in the show ring.

David Faughnan, master judge, provided advice for the participants on how to judge Shorthorn cattle before a stock judging competition for several age groups on the day.

Winners and runners-up of each age group received a Shorthorn YDP branded jacket, and all participants received a goody pack which Zurich insurance provided and a YDP branded cap.

Furthermore, Jim and Louie Dockery provided a halter-making demo with several participants taking part in making their own halter. Finally, Amelda Middleton Leonard provided guidance on how to take a professional photo of an animal.

In a statement to That’s Farming, a spokesperson for the Irish Shorthorn Society said:

“The society wishes to thank Frank Whitney & family for hosting the event, Padraig Flanagan. and the Croghan Shorthorn Breeders’ Club for organising the event, David Faughnan, the master judge on the day and Zurich Insurance for providing sponsorship for the event and a goody bag for all the participants.”

“A special word of thanks to Sinead Flanagan, Arran Dockery, Katie Flanagan and Chris Kerrigan, who were a big part of the committee organising this event.”

“These young committee members are the driving force behind this YDP event, and credit for the new YDP logo goes to these young individuals,” the spokesperson concluded.

- Advertisement -
Previous articleTexel gimmer leads Enniscrone Livestock’s sale at €3,300
Next articleSheep prices back €4-€5/hd with tops of €198 at Kilkenny