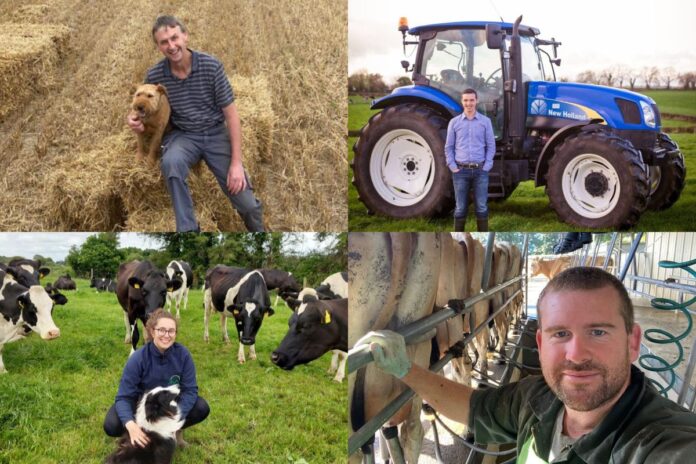 5 of the dairy industry’s trail-blazing farmers

In this article, That’s Farming previews five of our most popular dairy farmer segments of 2022.

Her family has owned a dairy farming enterprise for at least seven generations going back to the 1700s.

Her father, Brian Geoghegan, runs the farm after being handed it down from his father, John Geoghegan.

“I love nothing more than being down in the pit milking cows. Ensuring early illness prevention is highly important on our farm. Therefore, we pride ourselves on our attentive nature with our stock.”

“The most challenging part of farming is the weather, as it determines what jobs we can carry out on any given day.”

“I believe that if cows are well taken care of, this will positively reflect in milk yields and solids, leaving both cows and farmers happier.”

Although Paul grew up on the home farm, it was very different back then from what it is now.

At the young age of 16, while still attending the local secondary school, he found he had an interest in the dairy side of farming and with just “a few cows”, he started what would become his life’s vocation.

Starting with 15 cows, Paul now milks a herd of 75 cows at present, with plans to increase to 80/85 in the future.

Asked about his preferred type of milking cow, he describes her as “a British Friesian type cow with a black body and not too tall”.

He told Clodagh Hughes: “She has to have a good square back on her, good feet and is easily maintained. In a nutshell, low maintenance”.

Stewart is a third-generation farmer based on the family, which was initially established as a pig and potato enterprise.

In the 1970s, Stewart’s grandfather, Bobby, converted the farm to a dairy enterprise. Stewart, alongside his father, Lindsay, operate the dairy farm.

The herd consists of 120 dairy cows, supplying milk to the local Lakeland Dairies.

“Initially, we milked Friesian cows, which began to breed with Holstein bulls. This gave us stronger cows which milked well and had greater longevity,” Stewart explains to That’s Farming.

Mountview Dairy continued to use Holstein bloodlines until they reached a point whereby all animals were pure-bred Holsteins.

The abolishment of milk quotas in 2015 paved the way for the Doherty’s herd expansion in Adare, Limerick.

At this point, they milked 70 dairy cows on 53 hectares and decided to disperse their suckler herd.

They focused on the dairy herd using their replacements, land from the beef cattle, part of a neighbouring farm and existing farm buildings.

The family said they made very little investment but significantly increased their output.

“The land was on our block, and we had the land to go into, but we never had the quota to supply the milk. So, I suppose it was a no-brainer to go to 100 cows,” Colin Doherty told That’s Farming.

“Also, we had plenty of labour as we were both here. We needed two wages as well to make the farm more self-sufficient. We were both working on it, so we needed to be paid.”

In 2015, TB hit the herd, which resulted in the loss of 23 cows out of 95, but that did not hinder progress in the years that followed.

AOD milking, calving in mid-July, pushing production to 350kgMS/cow and numbers to 450 cows are the cornerstones of Macky’s thriving enterprise in New Zealand.

They have 310 Jersey cows, which graze year-round and calve from mid-July onwards.

“We farm Jerseys for a couple of reasons. Firstly, all previous generations farmed them (not the same herd).”

“Also, they are a lighter framed cow, which is good in winter, reducing pugging. Furthermore, they are great converters of grass to milk solids (because we get paid by the MS, not litres) and adapt well to OAD.”

Are you a dairy farmer? To share your story, email – [email protected]

- Advertisement -
Previous article
New CAP: ‘Farmer planting 20-acres can secure €11,400/year’
Next article
‘Every farmer should have a calving jack’ – vet on 20 essential items for calving 2023