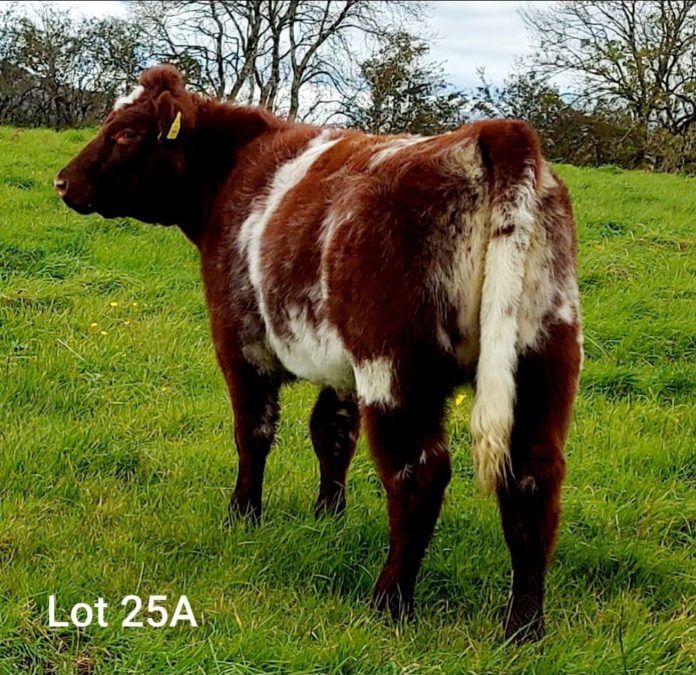 Pictures and prices: Up to €5.76/kg for weanling heifers at Shorthorn sale

Pushing up to €1,950 at the Moyside/Croghan Beef Shorthorn Club’s annual autumn sale was lot 7A, an in-calf heifer bred by Lismacool Sunny Boy, a son of Brickeens Smasher.

The sale, which was held at Elphin Mart, Co. Roscommon on Saturday (October 17th), attracted 75 entries, according to a club spokesperson.

A selection of pedigree registered, and non-registered Beef Shorthorn breeding stock went under the hammer. 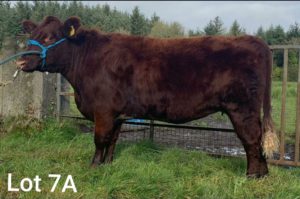 Second and third-highest prices in this category were achieved by Ms Angela McGahern, Granard, Co. Longford. 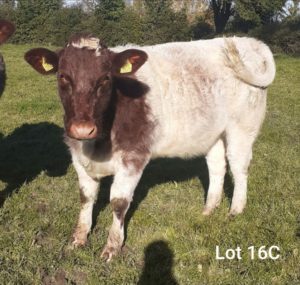 Both heifers were sired by Grousehall Mayflower Storm ET, a son of Alta Cedar Perfect Storm with Ballyart Lucky ET and Chapelton Liberty on the dam’s side.

Lot 16B found a new home in Elphin with Mr John McDermott and her stablemate was acquired by Mr Charlie Farrell, Dromard, Co. Sligo. 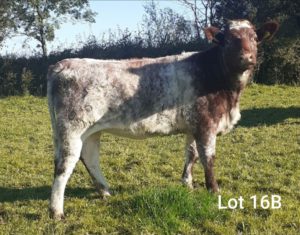 Speaking to That’s Farming, a spokesperson for the clubs said: “There was an exceptionally strong trade for all females on the day with all classes seeing strong demand.”

“Average prices saw a significant increase from last year. Maiden heifers were up €95 while weanlings saw an increase of €120 on the previous year.”

“The pedigree females saw a 98% clearance and the commercial females a 100% clearance. The males met with a tougher trade with a 50% clearance.”

The top-priced bull was lot 61A [pictured below], an August-2019-born son of Ballyart Lucky ET (YKK) from a Ballylinney Eagle dam. 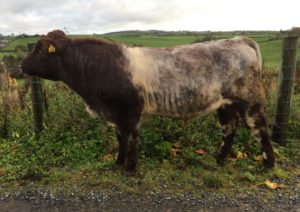 Following on his heels at €1,350 was lot 58A, Ballycurraghan Jimmy, a son of Renvyle Hurricane shown by Mr Pat Fallon, Maynooth, Co. Kildare and purchased by Mr Marty Mee, Donamon, Co. Roscommon. 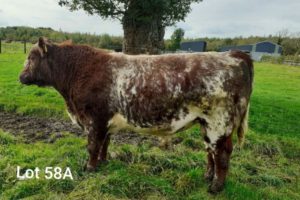 In the pedigree weanlings, a top call of €1,500 was paid for a “very smart roan calf” bred by Mr Ben Lang, Ballinacarrow Co. Sligo [main image]. 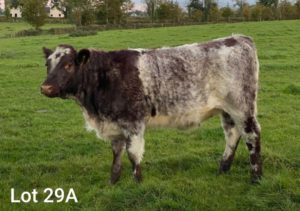 The third top price in this class at €1,400 was lot 18C[below], Cloontia Bonnie 2nd, a white calf, daughter of Killure Con 2nd, by Sprys Patent Ace. 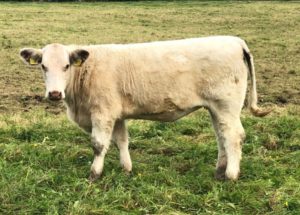 A commercial weanling heifer, out of a pedigree Limousin cow-heifer and Shorthorn bull, Gavan Summit, climbed to €4.92/kg.

Weighing 345kgs and bred by Terry Middleton, Moate, Co. Westmeath, lot 42A was snapped up by the Flatley family Glann, Co. Mayo for €1,700. 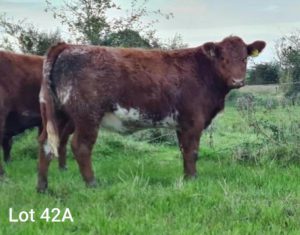 “Overall, a very successful sale in challenging times with great interest shown in the Shorthorn breed.”

“The Moyside/ Croghan clubs would like to thank management and staff at Elphin Mart, auctioneer, Mr Pat Considine, all our customers both sellers and buyers and wish you all the best with your Beef Shorthorn stock.”

- Advertisement -
Previous article
Covid-19 Level 5: Some marts seeking to have limited number of ringside buyers
Next article
Over 50% of cattle at Kanturk Mart bought online by NI customers