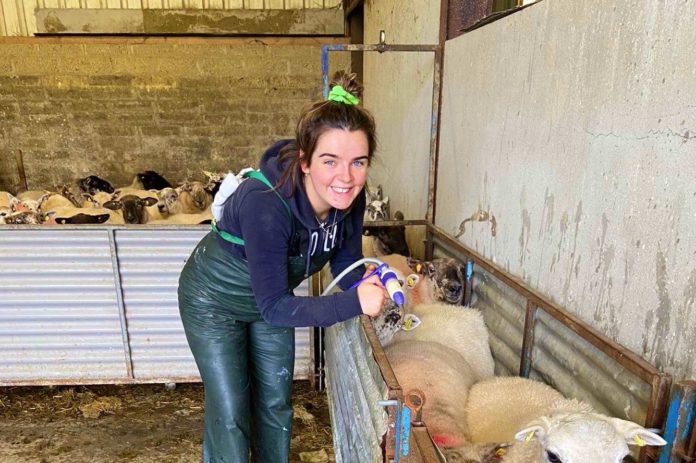 GMIT/Mountbellew student, Annie McGuinness, has worked on Park House Farm in the UK.  She recounts her experience on the farm, which is home to 350 dairy cows, 650 ewes and over 100 beef cattle.

Park House Farm in Carlisle Cumbria it is owned and operated by Ian and Alison Henderson with five full-time employees.

They run a successful dairy, sheep, beef, and tillage enterprise across two farms, five minutes from each other, totalling 800-acres.

Firstly, there are 350 pedigree Holstein milkers. When cows calve, all progeny, both bulls and heifers, are kept for replacements or for meat production.

The heifers are all AI’d and anything that doesn’t go in-calf runs with a Hereford bull. This has been the first year for Ian to have a Hereford bull on the farm, so it will be interesting to see how it works out. They are usually all put with an Angus.

Anything that doesn’t go in-calf from the bull is AI’d again, and the rest of the herd is AI’d. The AI technician comes every morning to cover cows in heat.

Secondly, the sheep enterprise comprises of 650 ewes. Half of these are North of England Mules, and the other half are Mule cross out of a Texel ram. There are 15 Texel rams and 7 Beltex rams.

Thirdly, they own over 100 beef stock. Holstein Frisian bulls are sold on as part of a Morrison’s contract for Rosé veal just before they turn 14 months at an average weight of 540 kilos. These bulls are fed ad-lib all-year-round.

There are around 20 Belgian Blue sucklers and bulls. Bulls are sold as breeding bulls, and heifers are kept as replacements or sold at pedigree sales.

Besides, they also have roughly 250-300-acres of tillage, winter wheat, winter barley and spring barley. Some of this is used for the whole crop pit, while the rest is harvested. Over 1,000 small square bales are made for bedding on the farm.

The wheat/barley grain is dried down to 14% on-farm in their own drier and stored until Christmas to attain a premium price.

When on the farm, I was responsible for lambing 650 ewes. This was a fair step up to what I was used to at home, but I adjusted quickly. We were lambing indoors and outdoors in every type of weather you could imagine.

They separate all ewes based on age and rams are put out with the oldest group of ewes first.

If a ewe lambed outside with more than three lambs, which was often the case, we took them in. After 2/3 days, the smallest lamb was taken off and put into the pet lamb pen.

Due to ewes having more than twin lambs, there was often one lamb who didn’t get enough milk. Every morning, noon, and night, I went around every pen and stomach tubed any lambs that were looking hungry. 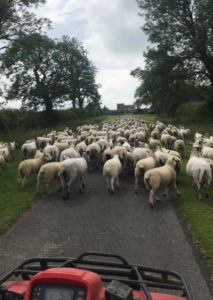 This was the easiest and quickest way to feed the lambs. There were days I would stomach tube over 80 lambs. It’s one job people find daunting, but once you get the right technique you’re flying!

We had over 100 pet lambs to feed that were fed powder milk from the shepherdess for the first month. It took a lot of nursing to get them to drink by themselves, but we got there.

They are then moved onto cows’ milk from the tank and then eventually onto nuts and grass.

I found it fascinating because Ian never scanned his ewes or fed them based on the number of lambs they were carrying.

All ewes were fed the same, and I have to say it’s a huge success. All lambs were born healthy and a great size.

When we were lambing, we would always have to go looking for more lambs in the ewe because we never knew how many lambs were in her. Lambing almost every year averages out at just over 200%.

Milking routine and other duties

The cows calve-all year-round meaning milking takes place 365 days of the year. Cows are averaging out at 32L/day, with 4.64% butterfat and 3.35% protein. This system works well on the farm, especially with lambing taking up the bulk of spring.

Some days you could have seven cows calving, while other days there may only be one.

During the day, jobs would vary. We could be dehorning or tagging calves, dosing sheep, mucking out pens, cleaning machinery, moving livestock, drying off cows or cleaning the parlour.

This year was a brilliant year for grass growth. There were three cuts of silage for the pit; some was also baled. We could have taken four cuts, but the grass was used for grazing and fattening lambs.

There was also 30-acres of turnips planted straight after harvest. This would usually be used to fatten Ian’s own lambs, but with the abundance of grass, Ian had it rented out to farmers per head/per week. 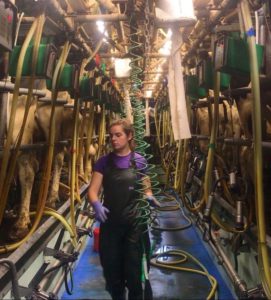 I travelled to England on February 1st, 2019, for my placement and stayed at Park House Farm until the end of August.

I did go home for my 21st and had planned to stay at home for summer, but I just had to get back to England. Two weeks at home, not flat out working making money was hard going, believe it or not.

In 2020, once I finished my third-year exams in May, I headed back out again until September.  It’s a farm I will always return to; it’s like a second home to me.

The way it works over there is that you in the sense that you get every second weekend off. This was brilliant in 2019 as I had several county shows to attend with my friends.

In 2020, this was not the case due to the pandemic. I remained on-farm and worked over weekends, as events were cancelled.

Towards the end of the summer, I took some time away when a new staff member joined the fold at Park House Farm.

When I arrived, the biggest eye-opener was the cows being indoors all-year-round unless they were calving during the summer. They would get their break before calving on the grass.

I had never seen it in Ireland, but it’s very common in England, and it is a system that works. It is a high input/high output system.

Another eye-opener for me was the work that went into the farm. My boss, Ian, gets up at 2:30 a.m. so that when cows have been milked, they come straight out of the parlour and go to the feed straight away.

Farms are on a much larger scale in the UK, and the majority are operated by full-time farmers who make a substantial income.

This is different from most farmers in Ireland. Our farms are on a smaller scale, and we just about get the money out of the farm from what we put in.

There are a lot of farms owned by the church. The church rents out hundreds of acres on estates or big farmhouses. This lease could have started three family generations ago and can stay in the family until there is no family to pass it down to.

I enjoyed every aspect from milking cows to rearing calves. There’s also no better feeling than watching a new-born from the moment it lands on the ground to grow up and thrive to become a mature animal.

Waking up at 4:30 a.m. on a freezing cold morning to go out on the quad, sorting ewes that had lambed, was no easy feat.

One morning, we went up to the field, and there were five ewes lambed along the ditch beside each other. With over twenty lambs, it was a mess. Nobody knew who belonged to who, but we sorted it out.