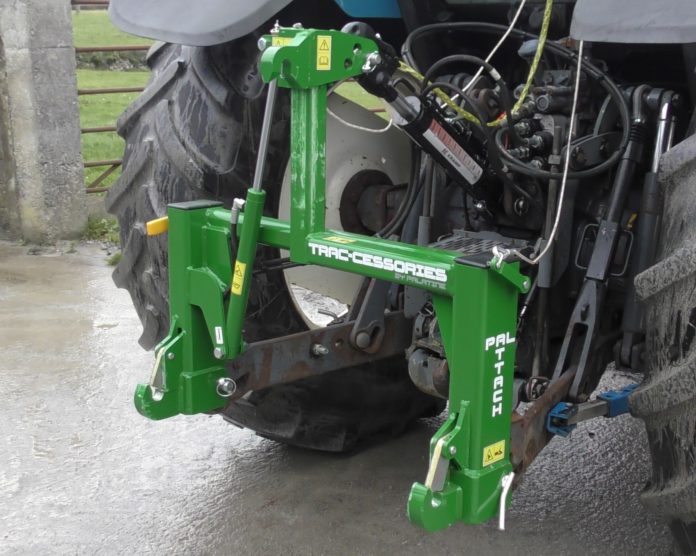 Palatine Engineering has launched Trac-cessories, a new brand to market a line of tractor-based accessories, the first of which is the Pal Attach.

The Pal Attach is designed to aid hitching of 3-point linkage implements on tractors. As this can be done from the tractor seat, it makes the job easier, quicker, and most importantly safer, according to the company.

It removes having the operator in the potential crush zone between the tractor and implement during hitching.

Furthermore, the unit is designed to attach to implements built to CAT2 standards. It will fit on tractors with CAT2 linkage and most with CAT3. The only other requirement is a double-acting hydraulic service from the tractor to operate the sliding top link hook.

Also, the Pal Attach does not require conversion plates on implements (subject being designed to CAT 2 standards), therefore, reducing expense and also allowing other tractors to still use the implements.

In total, the implement is pushed 170mm rearwards which will not be an issue in most cases. To note, the Pal Attach was originally developed and patented by OCE.

“However, they ceased production a few years ago to pursue other interests so both companies came to an arrangement for Palatine Engineering to restart production and sales.”

“It was strongly felt that the safety aspect alone was enough to restart the manufacture of the product.”

OCE scooped the innovation safety award at the 2016 National Ploughing Championships for the Pal Attach.

The Pal Attach is currently available through Palatine dealers with a retail price of €1100 (incl VAT).

Limited units are currently available with production “ramping up shortly” according to the company.