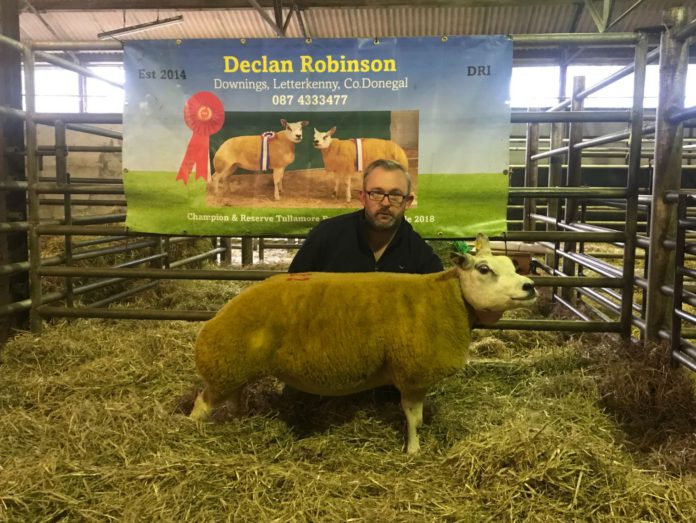 Society member, Mick Brady said this will “go down in history as one of the best Beltex Sales ever witnessed in Ireland, if not the best”.

“Under Level 3 restrictions, it was only possible to facilitate a limited number of prospective purchasers around the ring.”

“However, the addition of online bidding greatly added to the ferocity of the sale with online bidders active on the majority of forwarded lots.”

“Although prospective purchasers who attended the sale had the advantage of viewing stock live, it was clear prospective online bidders had their research put in before the sale with vendors reporting significant on-farm viewings before sale day.”

“The sale that followed saw a phenomenal 93% clearance of the females forward selling to a top price and new Irish record of €2,500 and a staggering average of €675, which is also believed to be a record average at an official Irish Belgian Beltex Society Sale in Ireland.”

This in-lamb ewe, scanned carrying twins to Netherholm Elton, was described as one of the best sheep ever bred by Robinson. She sold online to M.Burleigh after a furry of ringside and online bids for a “new Irish record” of €2,500.

Mr McGrath was also the top bidder for the third-highest lot of the day. Exhibited by John Maher, Ballinakill Cyou sold for €1, 560. This ewe from an excellent breeding line sold in-lamb to Carrigans Lower Denzel.

In-lamb ewes met with an “exceptional trade” with the remaining lots selling from €260 to €640.

“Buyers came from all over the country to source females this year. Many ringside and online bidders disappointingly failed to secure stock.”

“The sale was undoubtedly the highlight of the Beltex Society year. It was a fantastic indication of the continued growing interest and awareness of the Beltex breed and bodes well for 2021 and the future.” Brady concluded.