That's FarmingThat\'s Farming Irelands Largest Farming News, Properties and Classifieds Network
Home Dairy ‘We decided to convert to dairy as there was no money in... 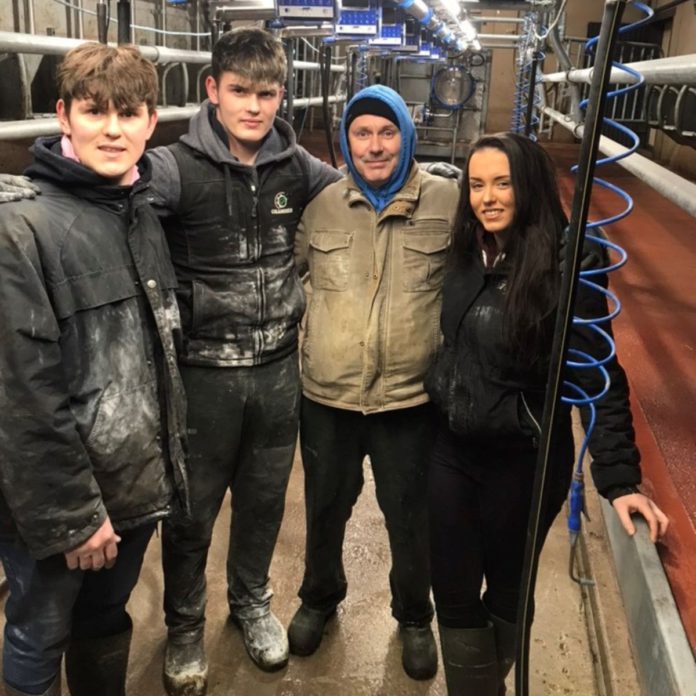 Jumping on the dairying bandwagon is a course of action that Rebecca Moore firmly believes her family should have taken years ago.

Rebecca is involved in running the family farm in Derrins, Drum, Co. Monaghan with her parents, Gwen and Richard, sister, Louise, and twin brothers, Dean and Christopher.

“We are all heavily involved in the farm, and all have our own individual jobs to do. My sister Louise and Dean milks the cows, while Christopher and I are tasked with calf-rearing duties,” she told That’s Farming.

“Farming was always a tradition in our family; this is the third-generation of Moores. My father’s grandfather was the first to start farming in the 1900s. It was originally a dairy farm with only five cows that were milked by hand.”

“Then, when my father inherited the farm after his uncle handed it down to him, there were only three cows on it.”

‘No money in sucklers’

It then became a suckler/beef farm right up to 2020 when the family dispersed their suckler herd and became new dairy entrants.

They ran a spring-calving herd, and sold all subsequent male progeny as yearlings, while heifers were sold at 18-months of age.

“We decided to convert to dairy as there was no money in sucklers anymore. Converting our farm to dairying was always an idea we had in our minds, but we never took the chance to do it.”

“We still have five sucklers, three that are my fathers and two of my own. Although there was no money in sucklers/beef, we still like to keep a few as the farm began as a suckler enterprise and we would like to maintain the tradition.” 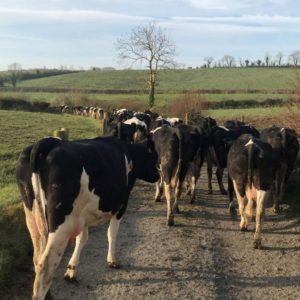 They began their journey into dairying by digging out the foundations in October 2019 and erected a shed that December.

In January 2020, the Moores installed a 10-unit Dairymaster parlour with ACRs and swing-over and began milking 52 British Friesian heifers in mid-February. They calved 30 of the heifers and bought the other 22 as calved heifers.

“We have left the pit and stall work long enough for 12-units to be added on at any time down the pipeline. We milk twice a day, taking only 40-45mintues to milk cows and 15-20 minutes to wash up.” 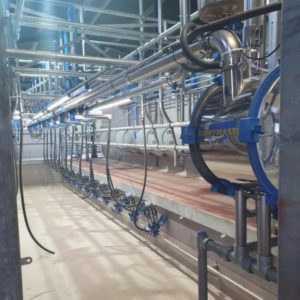 They dried off all cows in November and hope to milk in the region of 56-60 cows this year. The Moores run a spring-based calving system where all dairy cows calve between the end of January to the end of March.

“We AI’d five cows last year, the rest ran with a British Friesian bull. To note, we intend to retain all heifer calves, while bull calves will be sold as drops.”

“Our dairy cows are a lot easier on our ground than our sucklers were, which was a massive thing for us. Dairying has brought a better lifestyle/work-life balance for we as we have an income monthly with a milk cheque.” Rebecca added. 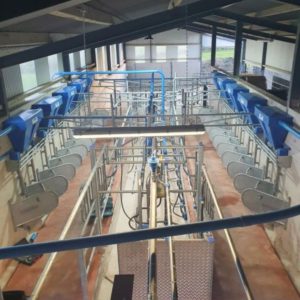 Looking ahead, the family has their sights set on expansion, with a view to increasing their herd size to ninety cows.

Their vision for the farm in the next five years is to extend their cow house to pave the way for expansion.

Furthermore, they intend to convert their byre into a new calf shed and to reseed to improve grass management, which will improve milk production.

“Advice that we would give to a new dairy entrant would be to do a lot of research and planning before making a move. Also, we would advise people to build new as it is a place that you will be in 7-days-a-week and you need to have comfort.”

“We would also advise new dairy entrants to seek well into what type of heifers/cows they require for milk production purposes and how well they will perform for you in terms of solids/protein/EBI. They are significant figures to take into account.”

“Converting to dairy has been the best move that we have undertaken and is one that should have been done years ago. We look forward to the years ahead.” Rebecca Moore concluded.

Did you know that an Irish consumer buys potatoes, on average, once every second? In 2019, over 200,000 tonnes of potatoes were bought in Irish...
Read more
Beef

The Department of Agriculture, Food and the Marine's 'REPS-like’ pilot results-based scheme needs to deliver “real money” to farmers. That is the view of IFA...
Read more
- Advertisment -