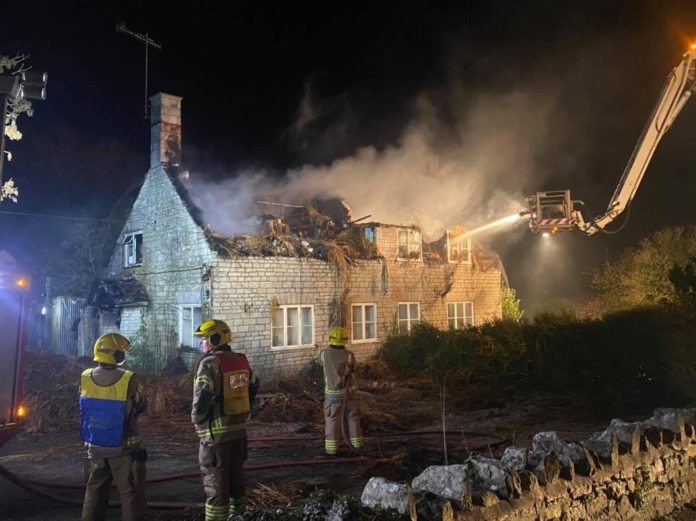 Approximately 65 firefighters tackled a blaze in a thatched cottage in the UK last Thursday (October 22nd).

One individual suffering from smoke inhalation was hospitalised following the incident.

Firefighters received an emergency call at 6.43pm in relation to reports of a kitchen fire in one of a pair of semi-detached cottages, which was spreading to the thatched roof.

In a statement at the time of the incident, a spokesperson for the fire service, said: “Dorset & Wiltshire Fire and Rescue Service is currently dealing with a significant house fire in Poxwell, which has led to the A353 being closed.

“As at 8.15pm, there were 13 fire crews and approximately 65 firefighters on the scene – from Weymouth (two), Wareham, Bere Regis, Portland (two), Dorchester, Hamworthy, Poole (two), Beaminster, Bridport and Westbourne – together with an aerial ladder platform from Westbourne, a water carrier from Poole, and support units from Hamworthy and Poole.”

“Crews are currently tackling the fire to try and contain it, while also salvaging possessions from the affected homes. All occupants are accounted for. One person was taken to hospital with smoke inhalation.”

“The A353 between Warmwell Roundabout and Osmington Mills will be closed for some considerable time, and drivers are asked to avoid the area.”

Firefighters scaled down the response to six crews and supporting appliances. Firefighters said the blaze was brought under control by 11pm.