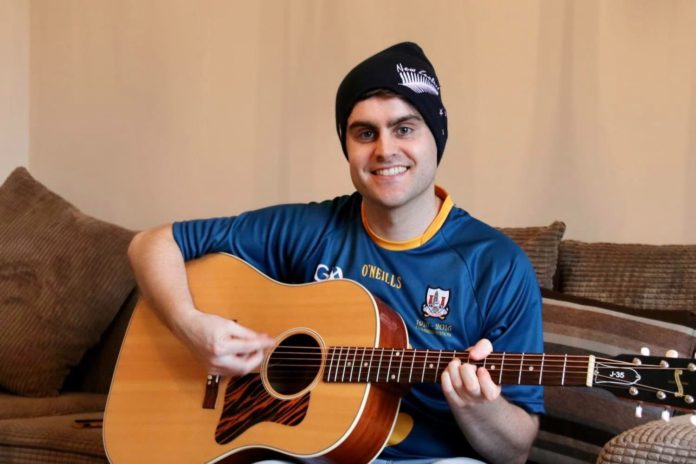 Kennedy releases A Song for The GAA

Michael Kennedy from Co Cork has released a brand-new song documenting the Gaelic culture entitled, “A Song for The GAA.”

The full-time multi-talented musician and songwriter has a powerful repertoire of songs.

The 34-year-old from Curraheen, who is now based in Bandon, was the first musician to strike the right note on the new type of modern agricultural songs.

A Song for The GAA

The recording of “A Song for The GAA” was inspired by his family’s Gaelic culture. “My father and my brother are both GAA fanatics. GAA would have been seen as a big part of our life,” he told That’s Farming.

While he has not participated in the games, he feels it is important to highlight the association and cherish the Gaelic culture. It plays a vital part in our Irish history and is a huge part of our identity.

Kennedy is overwhelmed with the feedback from the GAA song. “It has been getting great feedback from my local radio station in Co Cork. I am in the process of getting a YouTube video recorded.”

The response to this song has been plummeted by his huge success of The Silage and Maize Song 10 years ago. The song was in the glare of publicity on RTÉ 1 Nationwide in August 2011 and on RTÉ Radio 1 Countrywide in May 2011 after it went viral.

He also featured on the latter programme again in April 2013 for his follow up song “Tractor Lad”, which he performed live on air with a star-studded line-up.

Since then, the self-penned tracks have been garnering massive airplay on local and internet radio over the past few years.

He embarked on his musical journey at the tender age of twelve when he first picked up the guitar. He learned to play the banjo at sixteen taking huge influence from the renowned banjo player, Gerry O’Connor.

The likes of The Dubliners, Shane Mc Gowan, Stockton’s Wing, Four Men and a Dog, Nomos, De Dannan and John Spillane to name but a few have inspired the traditional music enthusiast.

Mick McCarthy from Lissarda was one of those who helped steer Michael’s passion of silage and maize in this direction as he was completing a day’s work of contracting in the field behind the musician’s house.

It was the sound of the machinery and the smell of the fresh-cut silage which would concur with Michaels’s knowledge of agriculture. He joined Mick on the harvester to grasp in on the action in the CLAAS 880 Jaguar.

Michael relished the idea of capturing the silage action through the eye of the lens each year while Mick cut his neighbour’s grass.

View videos of Michael’s music on his YouTube channel.

- Advertisement -
Previous article‘I believe with the support of farmers right across the country, we will make a real difference’ – Shine
Next articleReducing carbon emissions in dairy beef production