Peter and Paula Hynes of Rathard Holsteins, Co. Cork alongside Rachel Doyle, have released the 2021 Irish Farming is Rearing to Go 2021 charity calendar.

They launched the calendar on October 16th as part of one of the final events of Ag Mental Health Week.

The trio will divide all proceeds between two charities, Embrace FARM and Teac Tom. The idea of the calendar came about when they spoke about how they could do something for the two charities.

“I felt a calendar was a great way to advertise good farming with a great opportunity for the charities.” Peter told That’s Farming.

“I think it is right to support charities. We have done a lot of work with both charities in the past. We felt prioritising your mental health goes hand-in-hand with farm safety and the charities would complement each other.”

The aim of the calendar is to create awareness around safety on the farm and highlighting the importance of talking to each other and to remain positive and get help if required to remove the stigma. 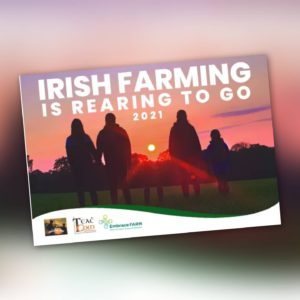 “We have sold over 300 calendars so far and we are hoping to sell more in November and December. It is an ideal Christmas present and is something that we hope to work on year after year.”

The photos involved in the calendar for each month involved the participation of four farms. “It is nice to get other farmers across the country involved in it too.”

The photos were captured by Peter & Rachel. Rachel Doyle, a PhD student in Teagasc Moorepark visited many Irish farms to capture the calendar photos on all that is good about Irish farming. In addition, Peter captured the cover photo of the calendar.

Anyone who purchases the charity calendar is entered into a raffle with over 90 prizes including feed, fertiliser, fencing equipment, vouchers and many more prizes.

“It is nice to give something back to the people and a lot of companies and schemes have supported the initiative. It is a good chance to win a fantastic prize while getting a calendar and supporting two great charities.”

Finally, they will announce winners of the raffle on December 16th.